Drums Along the Mohawk

Before this week swallows me whole, I just want to ask: Why didn't someone tell me? What rock have I been under? I feel like someone who has just returned from a gala party only to look into the mirror and see spinach stuck in my teeth from the appetizers I chomped the moment I arrived. "Why didn't someone tell me I had spinach on my teeth all night?  I was talking to the Monsignor!"

Yes, that happened once.

Now I know to always bring a sidekick for spinach checks. 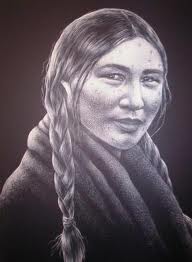 So I just read, what is apparently old news, that Blessed Kateri Tekakwitha is being canonized this fall! Why didn't someone bring this to my attention? This is thrilling news.

Poor little Kateri has been languishing around with her one miracle for decades, or so I thought, patiently awaiting her second on her road to the golden wall of names behind the pearly gates.

Unbeknownst to me (like a lot of things, some of them green) Kateri actually does not have a first miracle. I'm sure this must not be the first time this has occurred during the canonization process for saints, but it is the first time I've heard of it. Pope John Paul II, who canonized more people than any Pope in history, waved off her first miracle like a plane that was about to miss the deck of an aircraft carrier.

Perhaps that wasn't a good analogy.

In any case, she didn't have any miracles going on when she made up way up the canonizing ladder to "Blessed".

Now she has a doozy of a miracle. I think it's worth two miracles.

In 2006, a 6 year old boy cut his lip during a basketball game. Overnight, his lip swelled and before you could figure out how to pronounce "Tekakwitha",  he developed a flesh eating bacterium.

What is scarier than a flesh eating bacteria? Not much. Zombies, maybe, but they don't exist.

The horrible bacterium destroyed his lips, cheeks and forehead and the doctors said the little boy was not going to live.  The parish priest asked the congregation to pray for the intercession of Kateri. He chose her because of her facial scars  and because she was a Native American. The little boy is half Lummi Indian. 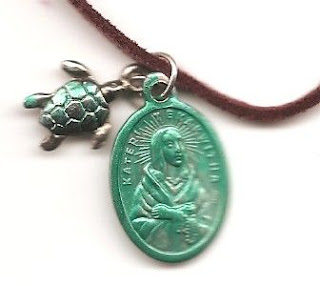 I say, "is" half Lummi because as the prayers poured in from around the world, a representative from the Society of the Blessed Kateri placed a Kateri medal on the boy's pillow. The infection stopped the next day and the little boy recovered.

Instantaneous and, a definitive miracle.

I think it's worth two miracles, not only was the boy cured, it throws open the doors of Heaven for all of us when we think of the patron saint of Native Americans. Fabulous!

I also think that St. Kateri will be a good patron saint for the near sighted. Kateri survived small pox which left her scarred and sight impaired. "Tekakwitha" means "she who bumps into things".

yeah! for Kateri. I have been waiting for her for a long time. Thanks for the info.

Good gravy, we've nearsighted folks have needed a patron for, well, forever! Kateri's story always fascinated me as a child.

My daughter chose Kateri as her patron saint for confirmation. When my granddaughter Liliana was born, my daughter said she didn't know why, but she felt the name "Lily" was just perfect for her little girl. I couldn't help but think Kateri had something to do with her decision...Blessed Kateri is also known as "the Lily of the Mohawks"....

I knew the canonization was coming, but not that the first miracle had been waived. I heard the story on the radio, the little boy interviewed if I recall. It was of local interest in the Pacific Northwest.

My husband starts the next step in his cancer treatment next week with preparation for treating him with his own stem cells. Prayers will be appreciated.

I thought the first miracle was waived for St. Elizabeth Ann Seton, too. (Or maybe it was the 2nd miracle?) It's been a long time since I've seen the movie, "A Time for Miracles." If you haven't seen it, I heartily recommend it! And also, "Damien." I don't think there is a movie (in English) on Bl. Kateri yet. Someone should make a movie - but they are probably afraid of upsetting some of the Native Americans from the Huron tribe. Anyway, Tradition holds that Tekakwitha's smallpox scars vanished at the time of her death in 1680, causing Pope Pius XII to investigate and declare as an authentic miracle in 1943.
http://www.thelifeofkateritekakwitha.net/en/pc/chapter17.html

There are also claims that many pilgrims at her funeral were healed. It is also held that Tekakwitha appeared to two different individuals in the weeks following her death. http://press.catholica.va/news_services/bulletin/news/28579.php?index=28579&lang=en

But these are only traditions and claims. Only the tribunal investigating the Cause would know whether or not these are facts.
-Catholic School Teacher

This is such an interesting post! - I had never heard of her. As the mother of a son who is living with leukaemia, I invoke a whole arsenal of saints on a daily, if not hourly, basis. So I love reading of these instances of cure.

I have a friend who will be even more thrilled by that than I am... that's her Confirmation name, and we both live along Lake Erie. :) So she's a local saint. We'll work next on Father Nelson Baker :)

HELP! Your list of saints says you have Kateri medals (and you show one on this post) but I can't find them at Heaven Help Us. I've tried the search and gone through the pages. I am also quite nearsighted, so it might just be me, but could you maybe make her medal obvious (maybe one of the featured items).
Also, who would be the patron saint of plumbing problems?
Thanks!

Wonderful news!
I'm from the Buffalo area - please everyone pray for Father Nelson Baker to be canonized soon!

Bl. Kateri, pray for us.