You Can't Make This Up

Here are two responses from prior posts that have a lot in common.

On animals in Heaven:
I personally don't believe that animals don't have immortal souls. I know that's problematic because I'm an omnivore, and if one does, don't they all? I'm not saying I've got the logic completely down. I'm just saying that my dog shows me God's love for me because he loves me no matter how crappy I am. There's something eternal to that, and I like to think it's God manifesting in some way to remind me how dear I am to Him. If I'm wrong, and I make it to the right side of the gates, I'm betting that'll no longer be a concern. And given the amount of other things I could be wrong about, I think it's a forgivable one. 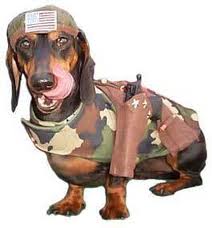 And this one, a response to all the hand holding and arm raising and wording and what gets sung and what doesn't  at Mass:

@NC SUE, you said "If we're striving for unity, should we allow such petty things to separate us for the others in the congregation?" My answer is YES, YES, YES!!! In the military groups of soldiers are formed into UNITS. UNITS wear the same uniforms with the same patches and everyone ahderes to the same rules of conduct and follows the same orders hence the name UNIT. Holding hands during the Our Father and clapping during Mass are not found anywhere in the GIRM. Neither one is part of the Mass and therefore both are abuses of the Mass, it's just that simple. It's no different than if 2 soldiers in a unit decided to start holding hands in formation of if I decided to start responding with ALLELUJA when receiving communion instead of saying AMEN. UNITY means ONE, if all are ONE that means ALL are are following the same guidelines. If parishes all over the world introduce their own unique innovations and twists on the mass pretty soon there is no unity.

Believe it or not, these two responses have a lot in common.  What do we believe?

I personally don't believe that animals don't have immortal souls. I know that's problematic because I'm an omnivore, and if one does, don't they all? I'm not saying I've got the logic completely down.

Yes, there is a name for that: Cognitive Dissonance.  That means you have two thoughts in your head, you believe them both, and they contradict each other utterly.  YOU CAN'T EAT SOMETHING THAT HAS AN IMMORTAL SOUL.  You can't cut off it's skin and make shoes and purses, lock one  in  a cage and steal its unborn baby, or make pate out of its liver.  If your dog has an immortal soul, so does a chicken and eating its eggs would be a mortal sin.

What you personally believe is not relevant. And your thinking is nonsensical. Another good reason to pay attention to what the Church says is true.

And here is where the two questions meet: what you personally believe is not relevant to this discussion. What the church teaches is. The church teaches that animals do not have immortal souls. That's why you're wearing some of them on your feet. When we start wearing each other on our feet, we'll talk.

So responder two is 100% correct. It's why we have a ritual called a Mass. We are indeed a unit. In fact, we are called The Church Militant. We are soldiers for good.

Which is also why we can't lose sight of the Big Picture. It isn't good to get our knickers in such a big twist over what someone else is doing, as long as that something isn't murder or unkindness.

While I fully agree with our second reader, I caution against the anger and judgment that seems to arise out of these discussions. Suddenly we have sinning at Mass, not because someone held hands when they shouldn't have, but because someone is grinding their teeth about it.

You know, nuns have two favorite mottos.  "Offer it up!" and "Mind Your Own Garden".  Both would be useful at Mass.
Posted by Sister Mary Martha at 12:08 PM

I always love your posts! I agree that getting stressed by what others are doing is not good. However, it is so frustrating to have people grab my hand during the Our Father, or wave their arms in the pew in front of me during mass in an effort to imitate the priest. Although less frustrating than the guy with an exceptionally accurate depiction of a naked lady on his arm that faced all those in the pews behind him... Sometimes you just need to close your eyes and pray for the grace to not lose your mind.

My solution to keep others from even attempting to grab by hands during the our father is to fold them up in the praying position and close my eyes to those nearest me. No one likes to disturb another who is apparently already in fervent prayer! lol

Hold hands during an ordinary mass? Never heard of it. Then again, I live in middle England. We do not do that kind of thing.

Animals do not have immortal souls. Given. Thomas Aquinas said so. But we do have immortal souls, and the way we treat our animal companions affects our immortal soul. Therefore, it is not unreasonable to have scruples about eating them and wearing them on your feet. We couldn't all do it (turning a bit Kantian here), we couldn't afford to. In fact, if more of us didn't, or took more care about when, where, how and in what conditions animals were kept and killed, and were more willing to pay for the privilege, it might be a good thing all round.

"While I fully agree with our second reader, I caution against the anger and judgment that seems to arise out of these discussions."

Perhaps it would be a good idea to take your own advice, Sister.

Whether or not animals have immortal souls is up to GOD. "With GOD, nothing is impossible." And if the Church does not wish to honor and bless the contributions pets make in our daily lives, then why do we bring our pets to church for the priest's blessing of St. Francis every year?

But what I'm really commenting about is your rude and insensitive response to the reader who disagreed with you about the animals. As he even said, once he gets to Heaven, there wouldn't be an issue about expressions of the love of GOD, so it wasn't like he claimed to be dictating cannon! If you had to give that reader such a humiliating comeback, why not, for mercy sake, have emailed him off-line?

Perhaps it's because I'm from the US, where freedom of speech is a right for everyone, but if you want to encourage discussions, then let people express themselves, as you say yourself, "as long as that something isn't murder or unkindness" without fear of being slapped down.

Your statement, "your opinions are not relevant to this discussion" is a misnomer. The very definition of "discussion" is an exchange of ideas. If, on the other hand, you're giving a lecture or a teaching, then don't open that paritcular post up to comments.

May the mercy and love of GOD be exhibited in our lives forever.

I do what Steve (above) does, and it always works. And I'm trying my darndest not to get angry at the hand-holders. But it is hard not to tell the sweet old lady behind me that saying "And she WAS conceived by the Holy Spirit" during the Angelus (and she says it that way every Sunday) is just doctrinally incorrect. Should I tell her, or keep my mouth shut?

I'm still not Catholic. I am still reading. I still love your blog. Amen.

Over on catholic culture .org they display the blessing of the animals. One line is:

And animals share in Christ's redemption of all creation.

Might animals then, be included in the new earth? If they just die and are gone, what is being redeemed? Or what is meant by redeemed here?

Are the stories about St. Francis bunkum, or was he just misled? I wonder why he would bother to preach to the animals if they are soulless.

Hello Sister,Could you please mention a few recommended blogs or other blogs you read?