That's Gratitude for Ya

We've had quite a lot of comments piling up on previous posts. Tomorrow I'll put some of them up so we can wake up the sleeping dogs and stir up controversy.

Meanwhile a reader is not doing so hot:
I'm currently waiting to sign a lease for an apartment. I've been praying more than usual because things are pretty tough right now. I've been waiting since February, it is now July. Not only has my patience been tested so has my faith. As a Catholic and having been born raised and even blessed with going to Catholic schools, I'm wondering if there is a patron saint to restore faith? I feel as though I've hit rock bottom and I'm trying to keep it together for my son. Thank you in advance.

Yes, of course there is! But before we get to that, can we pause for a moment and think about all the wonderful things you said?

You have a son.  You live somewhere that is not a box in an alley or a car or a shelter. Someone sacrificed to send to Catholic school, we we know there are at least a handful of people who love you.  In fact, everyone in the Catholic Church loves you.

We're not the "Church Suffering" (that's the Poor Souls in Purgatory).  We're the Church Militant. It's our job to live up to the commands Jesus gave us.

Here's one: "Consider the lilies, they neither toil nor spin. 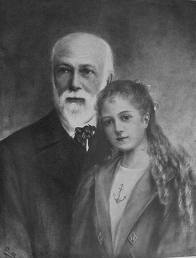 I'm not so sure you need a patron saint for lost faith as a saint to help you find your gratitude.  I suggest St. Therese the Little Flower.  She is a Doctor of the Church, so she can do double duty on finding your faith, as well.

St. Therese desperately wanted to be a missionary but she was too sickly for that. She never went anywhere but the cloister.  She decided to do everything as though she was doing it for Jesus, Himself.  She washed the floors as though He would be walking on them, for example.

I've always thought of her as a bit like Pollyanna. You remember her? She was always playing "the Glad game."  Let's face it, it was a little irritating. Pollyanna's dad was a missionary.  She so wanted a doll, but instead of a doll, someone sent crutches. Pollyanna was glad she didn't have to use them.

No, really, she was. That's why everyone loved her.  Everything worked out fine for her. We think. She fell out of a tree and was paralyzed.  But she had a rich aunt to take care of her and send her to the best doctors. I think. I'm a little fuzzy on the ending. It someone has a happy ending even though she falls out of a tree. For one thing, her crabby aunt feels terrible about pushing her away and finally realizes how much she loves the child.  That's something to be glad about.

I suggest you play this game: every day, think of five things for which you are grateful.  No repeats. I didn't make this game up and neither did Pollyanna. Oprah made it up.  Good for her.

You might ask why but I will always tend towards the saved Sister Mary Martha in any situation. There is a saint for lost faith or destroyed faith if it is not some one helping you return to the church after you left it. The biggest problem the church has ever faced were the endless requests for answers for too many questions. ( for example, how many today are all asking one million differfent ways "If I left the Church will the Church walk me back into the Church?" ) I knew of Saint Therese but Sister Mary Martha surprised me with it's much deeper meaning. I have brothers and sisters who own land, most of which would shoot me for saying it. To think there is a Saint to stop the shooting ha ha!
-----
My brothers and sisters have all but left the church for greener pasture. The church that is the physical church tends to exclude the church that is the spiritual church. Owning land creates a sort of jealousy in most all who try it. "Human nature" wants only what it wants. "The spirit is willing but the body is weak." Ownership wants to reverse this trend and have this read 'The body is willing but the spirit is weak' only it just will not work reversed. So be careful out there you land owners. There is no Saint to save you if you were saved then unsaved looking to be saved, unwilling to take the walk into Church. I wish you success with both your land and your medal.

Sister,
A few years ago, beset by ungrateful teenagers, I contemplated my own ungratitude and now when I am feeling down, I say a gratitude rosary, I name something for which I am grateful before each bead, sometimes within categories named on the Our Father bead. Naming the blessings can be very enlightening.
BTW, Leroy, my husband is a farmer, we own land.

Hello Sister, I just discovered your blog and LOVE IT! I was wondering if you could help me find a saint? I am someone who just can not seem to get her act together. Not sure what my problem is but I've got one. I don't have a career or children or do anything truly meaningful with my life. I seem really lost. I pray all of the time for guidance and wisdom but I haven't heard back yet.....maybe God has me on hold? I am grateful though that while I figure all of this out God has granted me the most wonderfully patient and supportive husband in the whole world who is very understanding of this slump in which I have found myself. I am very blessed in the marriage department (as well as the pet department). So, anyway, can you help me out? Thanks!