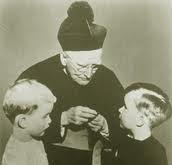 My last post on Blessed Soon to Be Saint Kateri prompted several people to also pipe up with their hopes for the future canonization of another local hero, Father Nelson Baker. I have heard that name floating around in the saintly ether, but I must admit I didn't know beans about him.  There are a zillion saints and would-be saints. I can't keep up with them all.

Now is as good a time as any to bring us up to speed on Father Baker, who is on the bottom rung of the sainthood ladder, having been pronounced "Servant of God" by that wonderful Servant of God, Pope John Paul II.  That means Father Baker's cause for sainthood is on the move.

Nelson's dad was a Lutheran and his mom was a devout Catholic. It always helps a person to have a devout Catholic in the family, doesn't it?  Nelson worked in his dad's grocery store. His dad was a tremendously good businessman and taught Nelson how to be one as well. Nelson opened a dry goods store with a partner.

He was terrific at it.

But something was missing. He took a little trip and came back to announce that he was going to become a priest.

He was terrific at that, too.

Not only was he a wonderful compassionate man who took care of tiny babies, orphans, old people and care givers with his own personal attention and care, he managed to do all of that because he was a terrific fundraiser. Better even that Mother Frances Cabrini, which is really saying something. Good old Frances could squeeze coconut juice out of a rock.

He was a terrific fundraiser because of his experience as a successful business man.

Here he had a simple model for making sure his orphanage was funded. He went to the Post Office and asked them for a list of all the Catholic women for miles around. He sent them all a letter and asked them to join the "Our Lady of Victory" association.  (Our Lady of Victory is one of the 1000 names for Mary, based on a 16th war against the Muslims in Europe.  Praying the Rosary won that war and the Pope gave Mary yet another name. Our Lady of Victory is also the name of the Parish in which Father Nelson landed.) He asked everyone to join for one year at a time by paying dues and told them how the money would be used.  The cost $.25.

I suppose he had some Bingo going, too.  Doesn't everyone?

But my favorite thing about Father Nelson....he was a Civil War vet.  He didn't become a priest until after he served in the Union Army, worked in his dad's store and ran his own successful business.

Father Baker is going to need two miracles for move all the way to canonization. One to be beatified and one to be canonized.  That's your job.  If you need a miracle, ask for his intercession. And if you receive a miracle, let the Father Baker advocates know!

Winning the lottery, as miraculous as it may seem, would not be a miracle. There is an explanation: you bought a ticket and you won.

I explain it with this true story. There was a man here in Santa Monica, CA who was sitting around his house one afternoon when he had the inexplicable urge to walk his dog. It was not time to walk the dog. He simply felt compelled to do so. Out he went.

While he was gone, his house exploded due to a gas leak.

Miracle? No.  If, however, he had left his house walking the dog and he was blind when he left the house and came back and seen that the house was blown to splinters, that would be a miracle.

Thanks, Sister MM... I live 9 minutes from OLV... and yes, the threat did exist... there are a lot of people for whom that was a reason to behave. I've been through the museum for Father Baker... there is a lot of beauty there.
Also: update: I'm still working on getting myself together... working on taking care of myself w/ the celiac diet and avoiding the anger caused by "well-meaning" complaints. Headaches/ seizures still ooky, but letting God handle that. And me. And as always, feeling rather blessed to see your writing!

Thanks for this post! Here in Buffalo, NY, many of the Catholic parish communities pray daily for his advancement to sainthood - especially at Our Lady of Victory Basilica, which is a beautiful church that frankly rivals any in Europe (and I've been to MANY). He founded an orphanage and did many great works around the area, especially helping the elderly and children, and he raised all the money to build the Basilica without incurring any debt - a huge accomplishment, given the economy at that point in time. If interested, you can Google this church and get a panoramic inside view through web-cams - it is truly a gorgeous church and we're blessed to have it in our area!