I knew my post the other day would yield a guardian angel story or two. I was not disappointed. This one was my favorite:
My mom insists that she was protected by her guardian angel when she was a kid growing up in Louisiana. She was picking blackberries and as she reached up, she got pushed backwards really hard and fell onto the ground. She looked up into the bush and there was a huge snake on the branch. She swears up and down she never saw it or heard it and no one was around her.

Score one for the guardian angel! And I guess for your mom, as well. Paving the way for our next comment. 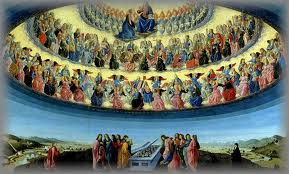 Sister St. Aloysius is too narrow in her intellectual view of the role of Guardian Angels. If saints who are earth bound can bi locate, who is to say that angels cannot? I see nothing contradictory in my Guardian Angel eternally adoring the face of the Father and simultaneously protecting me from temptations and errant buses.

Neither do I. I think perhaps I didn't explain very well. I believe I more or less said this if you re- read. I must have confused you with my last comment about invisible winged creatures protecting us from getting hit by a bus.

As the risk of confusing everyone further, I must admit that I am sometimes baffled when watching some poor jamoke on the news, covered in bandages from head to toe, after being accidentally shot out of a cannon they crawled in to inspect, saying something along the lines of, "My Guardian Angel sure was looking after me!"

I know. They mean they shouldn't have survived. But I can't help but think, "Where was your Guardian Angel when you crawled in there?"

Maybe I am more of a "glass half empty" person than I care to admit. The thing that intrigued me about Sister St. Aloysius' comment was that it took the burden off guardian angels to stop people from showing up on "Dumbest Home Videos" and onto the true job of your guardian angels, the protection of your soul. I didn't mean to imply that they can't or don't do both, although I certain ended up implying just that.

Perhaps my real point in talking about it at all is to dispel the notion of big winged creatures, as angels don't have feathers, I'll wager. They aren't former people who earn feathers in Heaven. They are an entities with free will and that's where the similarity between angels and us ends. Did you know that the Church frowns on the notion of naming your Guardian Angels? Yep.  That's to pull you back from thinking about them as winged people from Heaven that you get to call by name. You don't know their names and unless you have a mystical vision, you never will. They are not to be "PERSONified". 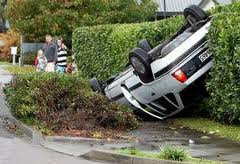 I admit that I bristle sometimes at the notions people have. The other day I was walking to the Post Office along a very narrow sidewalk that stretches for blocks on end all along the marina here. It's a beautiful walk with all the boats in the harbor on one side and a bike path on the other.  But for a long stretch it's a narrow sidewalk right next to two lanes of on coming traffic and a big curve in the road. I can't tell you how many times I've walked it, and every single time I worry that one false move by any driver, distracted by a phone call or text, or the guy in the next lane crossing his lane line and the driver next to me swerving just slightly to miss him and I'm mowed down like a corn stalk in the fall.

So imagine my shock when, returning from the Post Office that fine day, just where I had been walking, a car had done just that. Jumped the curb and come to rest a little sideways in a giant hedge. Anyone walking there at that moment would have been toast. A woman with a baby in a carriage had just done what I had, and we stood looking at the car and the ambulance and the fire truck agape.

If our Guardian Angels were indeed watching out for us, what about those people in the car?

The hedge, I guess. The glass is half full.
Posted by Sister Mary Martha at 12:49 PM

Sister, this is your best contribution yet, as much because you chose words commonly understood by all. Also, I too have a Guardian Angel story but because it takes up too much room I will send it by eMail if you can send me an eMail address to leroy_william_skees@yahoo.com , use any part you wish because we all love you, edit out grammar mistakes and to have it fit your blog if you wish.

Where was the driver's guardian angel, protecting them from killing a nun or a mother and her baby. :o}

That would be my first thought if I had been the driver, thank you Lord that I didn't hurt anyone.

Keep up the good work sister. Always enjoy reading you.

I agree that guardian angels are to look after our souls, rather than just our bodies. We seem to think that the best thing of all is a healthy comfortable life which is as long as possible. But when you look at the lives of the saints, it seems God has other ideas. The angels comforted Jesus in the garden - they didn't whisk him away out of danger.

Marion T I agree with you. The way our prayers are answered, the way our angel protects us is not always the same as we would desire.
When one hears a distinct voice commanding one to RUN HOME, just in time to prevent a fire from consuming one's house, where did that come from? I rather think it's from a benevolent presence and not simply one's imagination.
Father Barron speculates, in the Catholicism series, that each angel is its own species and that makes the most sense to me. I cringe whenever I hear from a Catholic who should know better, "Well, dear old Auntie Meg is now an angel in Heaven, watching over us!" when old Auntie Meg has shuffled off her mortal coil. Charity would compel me to eventually straighten her out on that notion but I'm a coward and don't know how to avoid hurt feelings there. Any suggestions?

Constance Teresa, as a good American Black and as a rare good White will say, 'play on their vanity,' their vanity being Christianity. Christians and Catholics do, contrary to most thinking, share certain truths, one being that 'after death our spirit lives' from which comes the twisted thought that we can become an Angel. Among things shared is the belief ( which is rare in the Church ) that upon death as we enter the second realm we are immediately led, hence comes a weak bonding between Christian and Catholic, the catholic say "Saint," the Christian say "looking down on me from heaven." "You say tomato, I say tomahto." Even a poor start is better then no start.

@Constance Teresa,
I know what you mean about not knowing what to say and how to say it, or IF you should even say it. We walk a delicate line sometimes. You might try saying, "I know what you mean... she was a "quote - angel," (use finger quotes) and isn't it consoling to know that our faith teaches us that we are part of the Communion of Saints? Holy souls in heaven, souls being purified in purgatory, and of course we, the faithful, the Church Militant? For all we know, she's conversing with an actual angel right now!

I have a simular problem. I watch my boyfriend's mentally handicapped brother on outings as an odd job. It has occured to me recently that he should possibly go to confession because he gets communion so I asked my boyfriend to ask his brother if he would like to go. The brother was asked if he would like to go and said yes and I have previously been told that he is 11 mentally but is 25.

It appears that he possibly hasn't gone since he had it the first time because one priest felt he wasn't of reason and the priest was not as Christlike as one would hope, if you know what I mean, and the families' frustration about the whole thing. The mother says the priest might say he is not of reason and doesn't know the disabled man and they had to switch churches due to the issue.

My boyfriend of 2 and half years doesn't think he could do it because he wouldn't know what to do and I say the priest would help him just like he would any other person and he could go to the one he knows through going to church and being involved in bowling with a church group.

His mother and my boyfriend are not currently angry with me but I don't know what to do next. Have any thoughts?

Sister, I always love reading your blog. I especially have enjoyed your posts on angels. Lately, I have been strongly feeling the presence of my guardian angel and have started praying the St. Micheal's chaplet as a way of thanking my guardian angel for all of his help.
Could you please recommend the correct saint to pray to in order to increase the amount of hope that one feels?
Thank you and God bless!