Can't We All Just...Change for the Better?

IN the words of the infamous Rodney King: "Can't we all just get along before we end up drunk and drown in the pool?"  He didn't say all of that. But that's what happened.The battle of the sexes rages on in the comment section.  The original poster returned:

That was me. I appreciate many individual men. It's masculinity I have come to hate. Three main mechanisms: 1. The nine times higher level of testosterone in men makes them feel inferior when they cannot feel superior (either subtle or overt). 2. Masculine men rather leave the scene as a loser than stay as an equal, due to their deeply rooted and cultivated hierarchic style. 3. Men - much more than women - define themselves by their sex. Any evolutionary biologist will indeed confirm that conception (the act of sex) is the only reason nature has for males of any species to be around. The surplus of males is useful to have them compete for reasons of selection. Voila. A recipe for suppression of women who see relationships in terms of equality. Many equalitythinkers faultily start to see hierarchic thinking as equal to equal thinking ('well, as a man he has his pride'), and end up as winners or losers themselves - against her will. This is a clear mass case of the Stockholm syndrome. 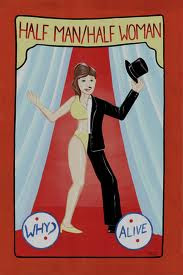 To answer that point, this is exactly where she needs to be, troll or not. I had to go ask the eighth grade boys what that meant.  A troll is still a person, thinking and typing. This is a great place to engage in this argument. She didn't make this claptrap up, after all. She must have read it somewhere on the internets.

Men define themselves by their sex more than women? Really? Women, who have a monthly period, nine times as much estrogen as men,  bear children inside their bodies,  and breast feed them, and bear more children and then go through menopause. I think women are equally defined by their sex, if hormones are the issue.  You're points about men can be thrown to the wolves along with the idea that you are so cranky because it's that time of the month for you. I don't buy that argument either.

Men are more prideful than women? Come with me some evening and visit a ladies' room on a Friday night in Los Angeles. There are women whose haircuts and fingernails cost more than my rent. Fingernails.

And if men are only good for procreation, I suppose we should gas all the menopausal women along with those useless boys.

In any case, we have to leave behind arguments that begin with things like "It's masculinity I have come to hate."  Would you accept it, dear reader, if I said, "It is femininity I have come to hate?" and then blabbed on about female hormones and why a woman can't be president? Of course you wouldn't. Your premise lands your argument dead in the water.

It is the Republicans I have come to hate. The Democrats. The Congress. The United States. Egypt. The Jews. Black people, brown people, The Daughters of the America Republic, The Baptists, Walmart.

Perhaps you just haven't been on the planet long enough to realize that every single thing that happens happens because of individual people, like yourself, and the choices they make. You can choose love and forgiveness and compassion. You can choose vitriol and divisiveness and hate. You. Not your hormones or your genes.

To that end, when you look at the world and see things you'd like to change, please do so with the vigor you possess in showing up here to argue. But remove the hate, because it's really not going to get you very far in affecting that change.

It's a great time of year to give it a whirl.

Loves me some Sister Mary Martha!

Lincoln "freed the slaves" in order to bankrupt the South. Period. Great man. Sheesh! Politicians always sell us their ideas by convincing us that it's good for us (or good for someone). We fought in Kuwait to free the people - a noble, humanitarian cause. Right. There just happened to be oil there, too. Lucky us! Men and women BOTH have a fallen, sinful nature in need of redemption. We cannot do this by ourselves, folks. We have all sinned and fall short of the glory of God. Let's swallow our pride, bury the hatchet, get to confession, and begin anew!

"Let's swallow our pride, bury the hatchet, get to confession, and begin anew!"

I think you've finally got it!

Of course, I know you were being sarcastic, but you've really hit on it there.

re anonymous who hates masculinity: your arguments are kind of disjointed, sounds like you might need therapy along with some intercessory prayers from St. Dymphna; or St.Joan of Arc (one of my personal favorites) who seemed to be quite capable of leading those testosterone-laden men into battle. Or, since she finds men to be such a pain, perhaps St. Teresa of Avila the patroness of headaches can be of help.
A woman reader who loves masculine men

Sister, perhaps you should consult some well-educated men on the subject of male hybris and misogyny. I suspect you will take them more seriously.

If you have internet, which I believe you do, you could for instance google Adrian Furnham (about gender and perceived intelligence) or Leonard Shlain (he passed away in 2009, but has a website which includes videos of some of his lectures). In case you are scared of people using their own brain and/or of science, I recommend consulting some clever Jesuits first.

And yes, I have made this nonsense up all by myself (before I even heard of Furnham or Shlain or whoever)! I've hardly read any feminist literature in my life. I'm just not afraid to use my brains. But, as I said before, I do not like debating. I've had enough of that.

One thing, however, I'd really like to mention, and that is about the implications of male hybris. Hybris is not 'just being arrogant', it is about being all sorts of destructive through that very arrogance. And since many suggest that I am being ignorant and (self-)destructive myself, perhaps they even think I am arrogant, let me say this to you: it would much rather be an attitude of sinful, arrogant, lazy ignorance if I would turn my head the other way in order to find peace and contentment in my own so called Christian serenity, while humanity is at the end of its Latin and so is our beautiful planet.

Meanwhile, in daily life and also online, I am not as unhappy and as unamusing as you may suspect.

Wishing you the best.