Dear Sister, you look stunning with the glasses! Unlike me, you must have read a lot. Now that you're going into saints. Are there saints that you know of who had to sacrifice their good manners and charitable appearance many times for the greater good of love? I'd like to learn about the meanest of them. But mind this: nasty bishops, popes and the like don't count, because it's cheap and easy to be edgy when you have connections, academic knowledge, a title, money and/or other means of gained power.

Stunning might be one way to put it. Some people do seem stunned when they see me.

And when they changed their ways, they carried tremendous guilt for their nastiness which made them all the more zealous for the good.

Case in point: St. Peregrine.  He is the patron saint of cancer because he had cancer on his foot. On the night before his foot was to be amputated, he dragged himself to the chapel and spent the night in prayer. He finally fell asleep. While he was asleep, Jesus came and touched Peregrine's foot. When Peregrine awoke, his foot was completely healed. 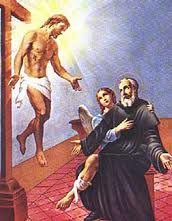 But if you back that truck up, you'll find that the reason Peregrine ended up with cancer on his foot was because he never sat down unless he absolutely had to. Like, say, to have his foot cut off.  He spent his life standing, which caused varicose veins and all manner of problems, included the aforementioned foot.

Why did he do that? Penance for his pre-saintly nastiness. In his youth, Peregrine had been part of an anti-clerical movement in Italy.  The Pope sent St. Philip to preach the anti-clerics back to the fold. His sermon was going well until Peregrine and his pals showed up an caused a ruckus. A ruckus wasn't enough for Peregrine, however. He marched up to St. Philip and slapped him.

He immediately felt horrible, became a cleric himself and stopped sitting down.

Or how about St. Paul, persecutor of Christians? There's some high nastiness for you. He held the coats for the people who were stoning St. Stephen to death so they had a better range of motion. After being knocked off his high horse, literally, he ran around blind for a while until he mended his ways.

St. Benedict was so strict with his rules that the other monks tried to kill him. A couple of times.  Ironic as his rules are based on balance, moderation and reasonableness. On top of that, the monks that tried to poison him (twice) had begged him to be their abbot and he had refused over and over again until he finally said yes.

Be careful what you wish for, monks, you might have a saint on your hands.

Perhaps you are confusing discipline with meanness, a common modern practice.

Your answer confuses me, I have to say, as the meanest of all in your post seems to be St. Benedict, because of his shrewdness.

Here's what I read on Wikipedia about the man: "Benedict matured both in mind and character, in knowledge of himself and of his fellow-man, and at the same time he became not merely known to, but secured the respect of, those about him."

People like Benedict are comparable to obnoxiously big rocks that block other people's roads. Becoming someone that others cannot possibly get around, is, well, that's mean! Such personal development is never done accidentally by the striking individuals in question, you know. Secretly they love being stones of offence, and the nicer they come across, the shrewder they in fact are.

So, wilfully developing a solid character is asking for assassination attempts, sooner or later, by a pack of former fans. I mean, there always comes a time that people want to move on with their own lives, isn't that so?

St. 16? Hi Sister. I so enjoy your blog. I hope you don't mind, today's entry inspired my thoughts and I quoted your St. Benedict part. If this isn't OK, just let me know and I'll delete it.

Thank you for all your inspiration!

St Nicholas punched Arius the heretic at the Council of Nicea

this blog has several art works depicting it,and the story.

Anonymous first poster,
it is not always a bad thing to stop somebody from following their chosen path. That path may be the well known Road to Hell, which is paved with good intentions. Just because somebody means well doesn't mean they're doing good.

"Meanest" in the original question meant "lowest, poorest, or most humble.'