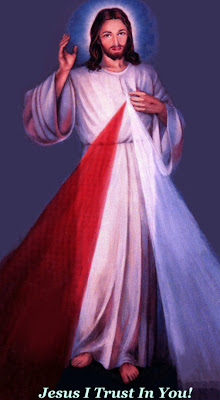 I can see where you would be confused. It's the water and blood, red and white thing that stirs the two images together. They are two separate things, but they are linked symbolically. Still confused?

I can confuse you even more by telling you that the Holy Lance used by the Roman centurion, Longinus, is still out there somewhere giving someone super powers. Then I'll write my own book about it and Tom Hanks will play Longinus, since he seems to like playing roles that involve huge Bible fiction.

Let's unravel this knot. What we actually know is that Jesus died on the cross pretty quickly. Most crucifixions lasted a day or two and Jesus was gone in a mere three hours. It was about to be the Sabbath and the Jews didn't want the three bodies still hanging, so they asked to get the whole crucifixion of the three poor souls over with. The soldiers came along to break everyone's legs, which would cause the condemned men to suffocate. But when they came to Jesus, He was already dead. So a centurion, who is nameless (but was played by John Wayne....or not...since I don't think we see John Wayne used a spear on Jesus, we only see John Wayne instantly become a believer, declaring, "Truly this was the Son of God"), gives the Body a poke with a spear to make sure He is dead. This incident only appears in the Gospel of John.

You might notice, by the way, that there is a lot of 'making sure Jesus is dead' talk, because it is very important to the story that everyone understands that Jesus was actually dead. Otherwise, He would not have risen from the dead. He would have just been feeling better after His ordeal and returned to His friends very hungry (as He does in today's Gospel). And we wouldn't be capitalizing His pronouns.

Anyhow, when Jesus is lanced with the spear, water and blood gush out. I've heard a scientific explanation that that was because, during crucifixion, fluids build up in the chest cavity, so it would be perfectly normal for water and blood to gush out. We don't care. We still pay more attention to the symbolism of the water and the blood, the two symbols of our Salvation.

With me so far? 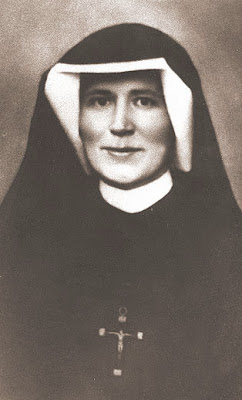 Enter Sister Faustina. Do you remember me talking about 'house nuns'? If you don't, I'll let you take a moment to catch up.

Sister Faustina was a Polish house nun, which means she was not the brightest bulb. (Not because she was Polish.) But miracles occur with the dull and the brilliant alike and one night in 1931 while she was alone in her cell, Sister Faustina saw a vision of Jesus.

"In the evening, when I was in my cell, I became aware of the Lord
Jesus clothed in a white garment. One hand was raised in blessing,
the other was touching the garment at the breast. From the opening
of the garment at the breast there came forth two large rays, one
red and the other pale. In silence I gazed intently at the Lord;
my soul was overwhelmed with fear, but also with great joy. After
a while Jesus said to me, 'paint an image according to the pattern
you see, with the inscription: Jesus, I trust in You.'"

Some time later, Our Lord again spoke to her:

"The pale ray stands for the Water which makes souls righteous;
the red ray stands for the Blood which is the life of souls. These
two rays issued forth from the depths of My most tender Mercy at
that time when My agonizing Heart was opened by a lance on the
Cross....Fortunate is the one who will dwell in their shelter, for
the just hand of God shall not lay hold of him." 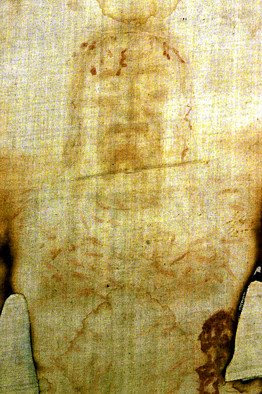 So...that's confusing. Because it never says in the New Testament that Jesus was lanced in the heart. It specifically says 'side' and that's where the hole is in all the pictures and that's where St. Thomas from Missouri stuck his fingers. I suppose the lance could have gone in there very deeply and pierced the heart from the side, since the heart is a little to the left. I should think that since John was being very accurate (seriously, read that passage John 19:31 and on), if he meant 'heart', he would have said 'heart'.

(Click on Shroud of Turin image for more on the Shroud)

The point of lancing Jesus in the first place wasn't to kill Him, but to make sure He was dead. So there would be no need to run a lance through His Heart. Shoving a lance into Him and seeing no reaction would do just fine. Like when the doctor pokes you in the toe with a needle to check to see if you are really paralyzed or just faking it for the disability checks.

You don't have to worry about it. In the first place, you don't have to pay any attention whatsoever to Sister Faustina. You never have to believe anything that comes from private revelation, including Lourdes, Fatima, the Miraculous Medal story, etc. It's entirely up to you if you believe those things, but the Church has given them all Her blessing.

Maybe Sister Faustina was so overwhelmed by seeing Jesus that she was a little off on her details. Who knows?

We only care about the symbolism anyhow. I'm content with the beautiful image of Jesus and His Divine Mercy that St. Faustina brought to us. Personally, I'm chalking this one up to "Sacred Mystery" ("Catholic" for "just let it go".)
Posted by Sister Mary Martha at 10:26 AM

I've heard a doctor speak about the Shroud, and read a few books on it. The lance, according to some doctors pierced the pericardium and the heart, and that pericardium would have had extra water in it due to the stress Jesus experienced. This makes Sr. Faustina's testimony very accurate.

Hello Sister, I would like to ask you something..is it better to make the sign of the cross before your meals outside or just to think it in your head? Because my Mum told me that maybe I should say it in my head (Mum says..because Jesus told us not to pray obviously in public but to our Father who sees all we do in secret)?
We like reading your site together, love from Sophia age 7

I was hoping you could help me find a saint or two I can pray to for my Lutheran friends that believe that it's not important to have faith in Jesus, you'll end up in Heaven no matter what you believe in.
I didn't realize that this is what they believe until today and it made me so sad. So I want to pray for them even more, and I could use some good friends to pray with :)

Hi, I'm RAnn and I'd like to invite you to participate in Sunday Snippets--A Catholic Carnival. It is a meme and a replacement for the Catholic Carnival Jay at Living Catholicism ran for many years. It is a place for Catholic bloggers to direct others to their posts and to meet other Catholic bloggers. Some participants blog exclusively about Catholic things; others (like me) do so only occassionally. Both are welcome. To participate, go your blog and create a post titled "Sunday Snippets--A Catholic Carnival". In it, summarize and link to at least on of your posts from the last week, which post should have a least a little to do with Catholicism (even if it is just showing off the cute Catholic kid). In your post, link to the master post which will generally be up by Saturday afternoon at http://rannthisthat.blogspot.com. Then, go to the master post and add your name to Mr. Linky. Visit the other blogs on the list and enjoy

If you'd like a weekly reminder to participate, subcribe to our yahoogroup at http://groups.yahoo.com/group/sunday_snippets/?yguid=1269802

Well, I really need a patron saint for time management. I have so many things to do and sometimes it really makes me overwhelmed. Anyone in particular that could help me out?

I'm with you on the Sacred Mystery. Sometimes the essence of something can be lost in the search for details. However, the yet-to-be-found lance with the super powers...That is something to get the details on. I'm hoping its super power is getting items off the top shelves in the grocery stores.

The gospel does not say Thomas actually put his fingers into the side of Christ or the wounds in his hand and side. It just records that Jesus invited him to examine them. Just thought I would let you know that since you are so interested in the details.