Although nothing could take anything away from the glorious day that is Easter, I did have a small disappointment.

I taped "The King of Kings". Oops. 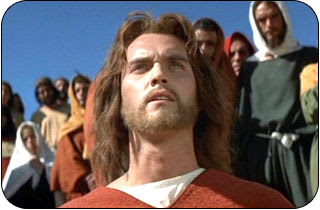 "King of Kings" is one of those Bible movie blockbusters, with a Nordic Jesus of some type. I always enjoy the casting of these things. In an epic Bible blockbuster we get to look forward to the likes of Ernest Borgnine as St. Peter and that type of thing. In "King of Kings", Rip Torn plays Judas.

(Disclaimer: as far as I can tell, Ernest Borgnine has never played St. Peter. He has appeared in an epic Bible movie at least twice, though.)

Isn't Charles Laughton running around as Pontius Pilate somewhere? I think he is. Since I missed "King of Kings", I'll have to wait until next year. I'll offer up my suffering to the Poor Souls in Purgatory.

"The King of Kings" has not one person anyone has ever heard of, except the director, who is Cecil B. Demille. Although, you may actually know the actor who played Jesus, not for his role of Jesus, but for his role as Mr. Gower, who nearly poisons someone in "It's a Wonderful Life." 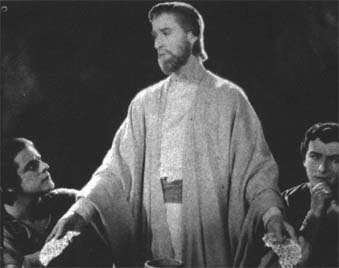 But not before some of the most entertaining flights of Biblical fancy I've seen in quite some time. In "The King of Kings", Mr. DeMille has Jesus running around doing things that Jesus did, but not in any particular order, saying things that Jesus actually said, but not under the circumstances during which He said them and adding detail that is entirely made up.

The movie opens with the wicked Mary Magdelene in a scanty outfit, playing with a leopard. She is part of some sort of court and the darling of all. She's miffed because her boyfriend, Judas (yes, THAT Judas) hasn't been around. The fat ugly old man who has a crush on her informs her that Judas hasn't been around because he's hanging around with this new prophet.

Mary heads off in her fancy chariot to see what all the fuss is about. It's VERY fancy. The horses are wearing hats.

Meanwhile, we see St. Mark as a 12 year old. (St. Mark, as in the Gospel According to Mark.) He is showing off his new walking ability, since Jesus cured his lameness. 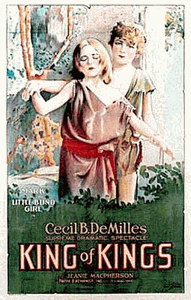 St. Mark is approached by another child who begs St. Mark to take him to Jesus. The child may be a girl. We really can't tell. (Here's the picture of St. Mark and the blind child. You tell me.) The child is blind. The child plays the part of being a blind child by running around with his (or her) eyes closed and his (or her) arms out. If we had been watching this film in Inglewood, the whole crowd would have been shouting, "Open your eyes! You'll be able to see where you're going!"

You know, if you squint at that movie poster, you'll see the words "little blind girl". I really thought it was a boy. She certainly kept Sister St. Aloysius and I guessing.

Judas is upset because Jesus won't charge a fee for healings.

Then I fell asleep. Too many chocolate eggs. I think I saw Lazarus rise from the dead. In this film, he probably went on to open a popular hamburger stand. His sister, Martha, after all, was a pretty good cook. 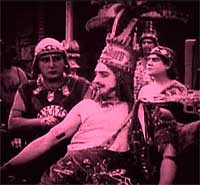 I suppose a relatively crazy story is as good a reason to enjoy a Biblical epic as the eye popping casting choices. And the hats. There is always an wide array of crazy hats. Did people really wear all these hats? I suppose they may have. Hats did used to be much, much more popular. When I was a child, one of the most exciting things about Easter was finding an Easter bonnet. We must have looked like the extras in a Biblical epic.

I'm not just whistling Dixie here, although it certainly must seem so. The whole thing has me thinking a lot about what we believe and where we get those ideas. Let's talk some more about that tomorrow.
Posted by Sister Mary Martha at 12:55 PM

You've caught me out. I do try to get my history lessons from the big screen. WWI from The Secret Garden, WWII from Holiday Inn/White Christmas, Korean conflict from M.A.S.H. Saves time and paper that way:>)

Wait, Mary Magdalene has a leopard and a chariot? I think they had her confused with Salome, who always gets the flashiest outfits in any Jesus movie. She also gets some really bizarre interpretations of what her dance for King Herod entailed.

I spent considerable time looking for an easter bonnet this year. Finding hats is getting harder and harder. I wonder how much the decline of hats as a fashion accessory can be linked to the post Vatican II women don't have to wear hats to church anymore thing?

We passed up all those versions of King of Kings for a rarely shown movie called The Green Pastures. From 1934, it is the story of the Old Testament as told by an ancient African American southern pastor, based on a pulitzer prize winning play that played on Broadway during the early 30's. With an all black cast you couldn't escape the rampant stereotypes of the day but the story telling was from the unique perspective of devout black sourthern christians and was very moving. The scenes of Babel and King Herod's court were stunning.

Toooo funny. Thanks for the laughs!

Sister,
Your blog is a joy to read and today's post is a perfect example of why. I have a question about praying to guardian angels. I find myself wanting to pray to my children's and husband's guardian angels, to ask them to protect my loved ones and lead them to Jesus and His Church. Is there a prayer for this? Is this 'kosher'? Surely I'm not the first person in the history of Christianity to think of this.

Hey, I loved The King of Kings!! I saw it at a silent movie theater a couple years ago, with the organ playing and everything. Yes, the acting was kind of corny back then but it's part of the charm.

Dear me, Cecil B. DeMille.

you could pray the standard rhyming guardian angle prayer but change the pronouns from first person to third person:

Angel of God,
my [child's] guardian dear,
To whom God's love
commits me [her/him] here,
Ever this day,
be at my [her/his] side,
To light and guard,
Rule and guide.
Amen.

My favorite Easter movie is The Greatest Story Ever Told, with Max von Sydow as Jesus, Dorothy Maguire as Mary (His mother) David McCallum as Judas, and a cast of others who were and are still fairly well known. It's tended to be under rated, but I never fail to be inspired by it. This year it was aired at 1am Easter morning, and though it meant a late night, I couldn't miss it.

Sharon, I find my best hats at antique shops, estate sales and thrift stores. There are a ton of great vintage hats out there.

Sister Mary Martha! Once again, I'm in trouble for reading your blog at work because I laugh out loud! You must be a joy to be around. I so enjoy your posts and your unique insight to our wonderful faith. (King of Kings is my favorite movie, too!)