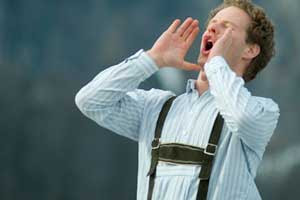 I have a question about an online game called runescape.  It mixes a church that is supposed to be Catholic with magic and superstition. Is it okay for Catholics to play? Thanks.
Stop playing it right now. Not because it's not okay for Catholics to play, but because it's Lent and that would be an excellent thing to give up.
Should Catholics play it at all?    As Catholics we don't believe in magic and superstition, although everyone who is not Catholic thinks we do. Miracles and saints, Transubstantiation, incense, Gregorian chant, monks in robes, candles.  It certainly can all seem very Dungeons and Dragonsesque. We are very confusing to the separated brethren, formerly known as the 'lesser faiths'.
The argument is that all of that magic and superstition in the game may confuse you or tempt you to believe some of it.  Anything that may tempt you to sin is called a 'near occasion of sin', which means you could slip and sin any second.  It's like a banana peel on the sin sidewalk.  It's like a Chute in the game "Chutes and Ladders".  You could be one yodel away from an avalanche.
One must also be aware, however, that it's okay to yodel.  This is the old "Harry Potter" argument all over again. And believe you me, I have had some doozie arguments about Harry.
The game itself is not a sin.  It's too bad it is an uneducated game that includes the Catholic Church.  Just because something is a crying shame doesn't necessarily make it a sin.  Is it one of those interactive things where there are lots of other people playing with whom you communicate? The game might be a good opportunity to set people straight.  Start your own blog and call it "Runevangelize".
By the way, when I read your question I asked a few people who play online games what they knew about the game and no one had ever heard of "Run Escape".  Someone finally figured out that you must be asking about "Rune Scape".
Run Escape might be a much better name.
Posted by Sister Mary Martha at 2:30 PM

Your not-so-subliminal messages are truly sublime.

I have question... though it's kinda long... :-P
ok...I'm a young devout Catholic that goes to church everyday, I don't really belong in any secular/civil groups...yep. The thing is that I draw in this manga style and my some of my friends are like, so crazy about it, and I even scare myself with it because even I think it's pretty good. >_< What's kinda weird is that I don't watch any anime stuff, nor read any manga. I hardly know anything about it. I really want to use these talents for good, (like make some sort of comic about St. Paul or something), but is the manga style too weird and wrong to do that?? Is it okay?
Thanks ^_^
Sorry the question might not make any sense...

I really do not play any games on line, or on the computer either with the exception of Bejeweled on my PDA. I either read, work on my Genealogy or do crossword puzzels, or am at work.

I think if you want to play some game you are OK as long as it remains a game and you do not believe the fantasy as reality.

Anna,
your art need not portray lives of the saints directly, but should perhaps reflect them, and/or the nature of God. C. S. Lewis did this sort of thing all the time in his fiction.

I read manga, and I study St. Paul's writing. There are different types of manga. Thanks to my violin-playing Japanese colleague, I read the ones where students in the music conservatory learn how to balance their responsibilities, become friends, and bring each other food. Similarly, I watch anime with messages about the importance of environmental stewardship. I think a manga on St. Paul is a lovely idea. You could also do one on your favorite saint. That would be like what SMM is doing with her Etsy shop, reminding people of saints in a fun format.

Sister Mary Martha...You're up to 41 fans on your Facebook page. I know you have a whole lot more than that so...let's get crackin' friends. If you're reading this and you're on Facebook, stop by her page and let her know you visited by registering as a fan. It's one click--that's all.

Having gone through the FAQs on RuneScape and having played it a bit, it seems that the "church" in the game doesn't even make a clear link to Catholicism. The emblems in the areas are vaguely cross-shaped, but that's about it. Just thought I'd get that out there.
(Still, it's a fairly boring game that I wouldn't really recommend anyway.)