Your Name is Thomas 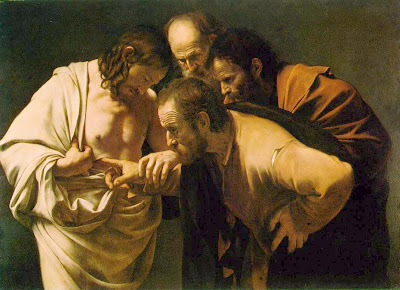 A big day here in the Catholic Church, the Second Sunday of Easter. To begin with, we have everyone's favorite gospel story, "Doubting Thomas".

You remember this story. Everyone else in Jesus' inner circle has seen Him since He's been up and around from the grave. Every except Thomas, who declares, " I won't believe it until I can stick my fingers in His wounds!" Big talk. Thomas must have been from Missouri.

Jesus comes by for a visit and Thomas gets his wish. Chagrined, Thomas says, "My Lord and my God!" And Jesus replies, "Blessed are those who have not seen and yet believe." If I were directing this scene in a made for TV movie, I would have Jesus say that line right into the camera.

I've always felt sorry for Thomas. His name is forever linked with his one weak moment. "Nervous Nelly", "Gloomy Gus", "Doubting Thomas" ( the poster child for the state of Missouri). 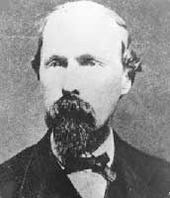 The only other person I can think of who has been saddled with that kind of lasting brand is Dr. Samuel Mudd, the physician who set the broken leg of John Wilkes Booth as Booth fled the assassination of Abraham Lincoln.

I always thought Dr. Mudd was innocent. His story was that this stranger with a broken leg came to him in the middle of the night. Mudd was a doctor, he did what any decent doctor would do. Everyone else who helped Booth assassinate Lincoln, including an old woman who ran the boarding house where Booth laid his dastardly plans (which she also facilitated) was hanged. Mudd went to prison for life. (He did some great doctoring while in prison, stemming an out break of yellow fever after the prison doctor died from it and was eventually pardoned and released in 1869.)

It turns out that Dr. Mudd was not so innocent, even though he was not a particularly bad man. Dr. Mudd did know John Wilkes Booth. Booth had had another hair brained idea before the war ended. He was going to kidnap Lincoln and take him to the South and hold him for ransom. Dr. Mudd had known about that plot. Booth had wanted to use Dr. Mudd's farm. Then the war ended and Booth got depressed that his version of how the world should work was done for. Lincoln, meanwhile, felt so uncharacteristically fabulous about the whole thing that he stepped out onto the White House balcony and gave a speech about how he was going to further the rights of former slaves.

That put Booth over the edge. But the rest is a bit of an accident. He went over to Ford's Theater to pick up his mail and he happened to overhear that Lincoln would be attending a play that night (instead of going to Good Friday services). Since he already had a group of conspirators in place, Booth launched his plan and the rest is history. 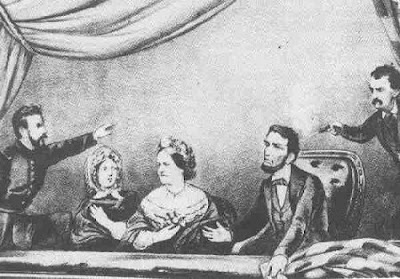 Mudd might have avoided his name being mud if Booth had not broken his leg when he caught it (oh, so ironically) on the flag draping the presidential box as he leapt onto the stage after popping Lincoln.

I realize that to say "popping" to mean shooting someone to death is a bit cavalier. But Booth just had a little derringer. He really did pop Lincoln.

Anyhow, Booth knew where to head with his broken leg. His name was Mudd.

What were we talking about? Oh, yes, St. Thomas. It really isn't fair that Thomas is not really remembered for much of anything except this one lapse. It had to be a lapse. He was, after all, one of the Chosen Twelve. Jesus wasn't crazy. He didn't pick nincompoops. But just try to find a medal like the ones we sell in our shop of St. Thomas the Apostle. What a great patron saint he makes! Who hasn't had a moment of doubt?

It's no accident that Jesus established the Sacrament of Reconciliation on the very same day.

Sister, Your blog is a joy to read and today's post is a perfect example of why. I have a question about praying to guardian angels. I find myself wanting to pray to my children's and husband's guardian angels, to ask them to protect my loved ones and lead them to Jesus and His Church. Is there a prayer for this? Is this 'kosher'? Surely I'm not the first person in the history of Christianity to think of this.

Go for it. Why wouldn't you? It is doctrine in the Catholic Church that everyone has a Guardian Angel. Those angels are sitting around the house with you all, all day and night, all the time. Not talking to them would be like if your mother in law lived with you and you just never ever talked to her. Although I'm sure that happens in some people's homes.

But if you are trying to lead them to the Church, may I suggest the Green Scapular. It's great for a little "stealth Catholicism".

Anything that we use to remind us of our faith is a sacramental, so yes, the pictures off the internet are sacramentals. Unless you have them blessed, I wouldn't worry too much about recycling them, though. Better that than wadding them into little balls and trying to score two points with your wastecan.

A novena is just a nine day devotion, so again, go for it. I do it all the time.

I love St. Thomas. He's my kind of apostle. He'd never fall for a con artist with that attitude, that's for sure.

This is a comment about your earlier post which asked how we came by our beliefs.
I am in the curious position of having had a Jewish mother, and a Catholic father; was brought up Catholic, while also accompanying my mother to the synagogue on High days and Holy days! - and there is nothing better in this world than a Jewish Passover feast prepared by my mother! We had the lot - matzoh and easter eggs on the table together.
My point is this: belief systems are an accident of birth, surely, at least in the first place. And wasn't it St Ignatius who said "Give me a child until he is seven...."
So. I am a Catholic, but I attend a traditional Latin Rite Mass, and I never pray for the conversion of the Jews on Good Friday, because if God hasn't allowed my mother into heaven because she was Jewish, then I think He soon will have because he couldn't withstand the power of her talking....
Foot in both camps - according to the Jewish religion, because my mother was Jewish, then so am I, and also my daughters, but not my sons, unless they choose to be.
I will not turn from my heritage, but I am, nevertheless, Catholic.
I have often wondered, and more so, now that I am a grandmother, what place there is for me in all of these vastly disparate backgrounds?

Sister, are you sure you aren't Sister Sheila Mary in disguise? She was my second grade teacher, and I clearly remember her telling us that St. Thomas must have been from Missouri!

These days I know a bit more about St. Thomas. He brought Christianity to India...the province of Kerala. One of our local priests is from Kerala, and I also support a seminarian there. All thanks to St. Thomas!

My dad was a colleague of Dr. Richard Mudd, grandson of Samuel Mudd. He worked his whole life trying to get his grandfather exonerated, with very limited success. By the way, Wikipedia states that "your name is mud" is a phrase with recorded use as early as the 1820's...so perhaps not originating with Dr. Mudd.

One of my very dear friends is Syrian Orthodox, and boy do they remember St. Thomas! As dre said above, St. Thomas brought Christianity to India, so he is at least as important to Syrian Christians as St. Patrick is to the Irish. Although, because he was also the head of the Church in India, and they didn't get many missionaries for a long time, he's almost as big as St. Peter is for us.

Just wanted to post a comment to say I love the theme of your site - Life is tough, but nuns are tougher. So true. So true!

Thank you! I can finish cleaning off my desk now.

To Maureen, I am no authority, but I do know this. Jesus was Jewish, and he followed the Laws of Judaism and celebrated the Holy Days. Jesus' Mother and Father were also Jewish, and did the same. Pray for your mother's soul, and leave her salvation in the hands of the Almighty. He is the Merciful, Loving and Just Judge.