And a Partridge in a Pear Tree 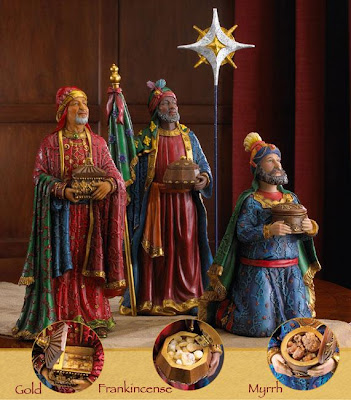 I apologize for my absence. I certainly wanted to write a little for the Feast of the Epiphany or as it is more commonly known "Twelve Pipers Piping". Or is its "Twelve Drummers Drumming"? Clearly, I'd be benched during the game of the "Twelve Days of Christmas" song game.
Instead of writing anything, however, I was over at the church dragging out the giant "Three Kings" statues. I actually didn't do any dragging. I was what my mother would have called a "straw boss", where I just pointed to what went where and shouted, "Watch out!" Everyone still has their toes, no thanks to me.
The Wise Men will visit with the Christ Child for a few days, and then back it all goes.
As I've mentioned before, I have a bone to pick with the Wise Men. Let's visit them for a moment.
We really don't know how many of them there were. They are simply "men from the East". There could have been a dozen of them. Or two.
How did we end up with these three?
For one thing, they have three gifts to bring. Thirteen people could have brought gold, frankincense and myrrh, and in fact as many as twenty five wise men did just that in the Passion plays of the middle ages, back when Passion plays were the only form of theater allowed. 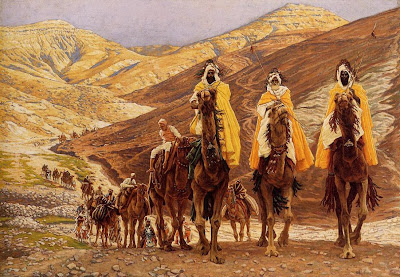 Those plays were such giant pageants that the arrival of the Wise Men was a big parade of horses and camels and bejeweled looking exotically dressed gentleman. I imagine that got expensive and messy. So the number of Wise Men gradually dwindled down to three, one for each gift.
The Wise Men also have no names in the New Testament. Of course, they do now. I chalk this up to actors. I imagine that the three actors balked at being called "Wise Man 1" and "Wise Man 2", and that some smart director appeased them by giving them each a name. Then the actors took it from there. "Hmmmm, if my name is Caspar, maybe I'm a black man from Egypt!" They probably fought over who got to bring the myrrh. It's so important and symbolic.
I'm not sure why they get to be called "wise" men. That's my bone to pick. Some translations of the New Testament call them only "men from the East" and leave off the "wise" part. They were wise enough to read the signs in the Heavens, interpret them as important and navigate across a long expanse to find a holy needle in a haystack. They were no slouches.
But they caused a massacre by stopping to ask Herod for directions. If only they had been like most men in that regard.
Our manager scene is a little off, too. The Wise Men don't belong at the stable. The New Testament says they showed up at the "house" and saw the "child". So maybe they didn't steam off across the desert on camels. Maybe they walked the whole way. 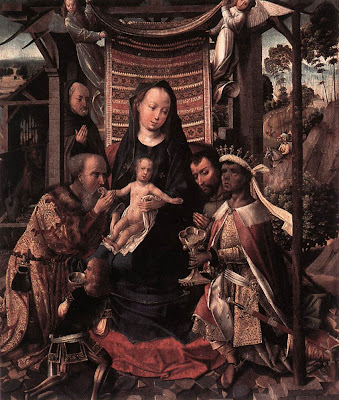 What we do know about them, however is very important. We know that they were wealthy, educated men who "bowed down" to this child. That's the really important part, that the first people to worship were the lowliest of the low, but that the wealthy and educated were also on board to see the Light.
On Monday they go back into the basement and we begin Ordinary Time. I think we can all use the rest.
Posted by Sister Mary Martha at 12:05 PM

I think you got lost Sister. Epiphany was moved to the 3rd (& the "old" Calendar had it on Wednesday). Sunday the 10th will be the Baptism. (Oh! For the "old" seasons of Sundays of Epiphany & Pentecost!)
As for "wise man'" the Greek (in which Matthew was written) the term used is "magos" (Magi) which were court astrologers, and as anyone who knows an astronomer they always have their "heads in the stars" so tend not to be pragmatic or worldly wise (kinda like a newlyordained young priest with his 1st checkbook!).

We, too, celebrated the Epiphany on the 3rd, but I believe this varies, as not all dioceses have moved the feast to the nearest Sunday.

At least they hadn't last time I checked!

What moves me about the wise men or magi, is the fact that they were not Jewish, yet traveled so far to worship our Lord. It shows that Jesus wasn't just for the chosen few, He came for all of us.

You should check out The Star of Bethlehem movie. What a fascinating look at the star and the magi! Our Legion of Mary sponsored showing the dvd at church. Look for info at www.thestarofbethlehemmovie.com

It gave a whole new dimension to my understanding of the birth and passion of Jesus.