Two Patrons in One 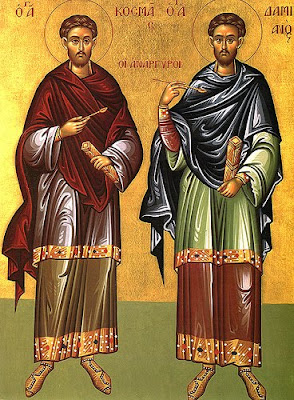 I'm not sure that I'm submitting this question in the proper place, but I'll give it a shot anyway.

Yesterday my daughter and her husband discovered that they are to be the proud parents of twins. We're ecstatic. So, I did a web search for "Patron Saint of Twins" which resulted in Saints Cosmos and Damian. They were twins, so that would make sense.

Which is correct?
Is the question I get asked the most, "Where do I leave a question?" Yes, I believe it might be the most asked question. You've gone to the right place, the comments section. I read all the comments. I don't comment very often. Sometimes other readers do such a superb job of answering a question in there that I just leave it go. So if you've asked a question, be sure and check back in the comments section anyhow, because the people who leave comments are very kind and very wise.
Twins! How exciting. And terrifying.
To answer your question, both are correct. As I mentioned yesterday, patron saints were people who have something to do with your situation, problem, job, hobby, dog....the idea is that you pick a person who had to deal with something like what you are up against. Sometimes it's a stretch, like the story of St. Blaise and his relationship with people who like to knit.
St. Blaise was tortured with a comb used to comb sheep. Wool comes from sheep. Knitters knit with wool. I'll bet there are plenty of saints who actually knitted, but since no one saint has ever been singled out as a knitting maniac, St. Blaise will have to do. Anyhow we love St. Blaise, even though he's the reason I never liked fish as a child.
Except for those fish sticks.
At least with Cosmos and Damian we don't have to extrapolate. There were twins. They were also doctors. They are also the patron saints of hairdressers. (Many saints have multiple patronages.)
"What?" I hear from the peanut gallery. Yes, hairdressers. It's not really even a stretch. In oldey olden times, doctors were also barbers. 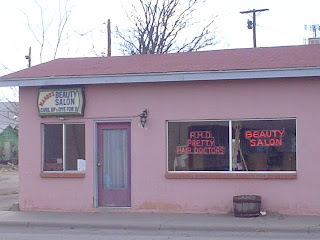 The doctor's office and the barber shop were the same place well into the 19th century. Hairdressers are barbers for women, so St. Cosmos and Damian are also at the ready for places like "The Epitome of Beauty" (my all time favorite name of a hair salon).
You might also want to call on St. Gerard, the patron saint for childbirth and St. Raymond Nonnatus, the patron saint of tiny babies. Then you can switch over to the Holy Innocents for their babyhood and move onto St. Nicholas when they enter childhood. From there you can go with St. Maria Goretti and/or St. Aloysius for their teen years (and St. Monica for mothers of teens). After that, we'll just have to see what shakes out with them. St. Thomas Aquinas for the college bound? St. Joseph if they enter trade school, St. Scholastica if they have a vocation.
They'll also have their own guardian angels, and whatever names are chosen for them, those saints. For girls, be sure and get "Mary" in there somewhere.
Posted by Sister Mary Martha at 10:46 AM

Sister, I love your blog. When I was in the process of converting a few years ago, i used to come here and read your archives. Today I just wanted to let you know that when I was in college, I walked down the street from my dorm to get my hair cut at Wally's House of Beauty. Seriously :)

When my Catholic friends are expecting twins, I usually buy a copy of the Tomie de Paola children's book, The Holy Twins, as part of the baby gift. It's about saints Benedict and Scholastica.

What about St. Thomas? Wasn't he a twin?

My dear , read the blog -Meditation from the Cardinal Nest - by Ruth !
http://meditationsfromthecardinalsnest.blogspot.com
At January 7 post ,you will see one amazing story about one amazing sister .She`s looking for founds to feed some hungryes childrens .
I just thinking how i can realy help !??
I pray that Joy For All will minister to it's visitors
and will encourage and bless everyone in some way.
We can identify with the disciples. At times, we have
a tendency to focus on the things that are going on around us instead of the One that is in control of all things. When that happens, reality may seem overwhelming, and the problems appear unsolvable. However, we must realize to be fearful
is to lack faith in God and in His provision for us. True faith focuses on God, not on the things that are happening.
Psalm 139:11-12
If I say, surely the darkness shall fall on me,
Even the night shall be light about me.
Indeed, the darkness shall not hide
from You, but the night shines as the day,
the darkness and the light are both
a like to You.
in Jesus love >>

Hi, sister. In Brazil, Cosmos and Damian are the protectors of children. On September 27th, we have kind of a version of hallowen in their honor, and children go out on the streets (during the day, no funny costumes) and get little bags of candies from the adults.

wally's house of beauty!!! HAHAHA! THat's hysterical. I used to go to 'John of Europe'. John being from the middle east and the place reeked of cigarette smoke rather than nail polish, so it worked for me. :)

I second Meredith's book selection! T. de Paola has lots of wonderful books for your collection.

Hi Sister!
First of all, thank you so much for this blog. It's absolutely wonderful! It's funny, and gets the message across so very well!

First a little background: I was baptized a Catholic, but that was pretty much it. I went to a Protestant school, and am only recently returning to my faith (I'm actually going through RICA right now).

So my whole understanding of the Christian philosophy as it applies to every day life (Not that whole "getting into heaven" thing), was very "Jesus loves me and I love him and we all should love everybody and do good and be happy" (which I have been told is a result of Protestant schooling, which was not as bad as people seem to think). I understand that this is not 100% accurate, and there is definitely a lot more to it, but this is a large chunk of how we should feel and act.

This brings me to my problem. I have a friend (a cradle Catholic; not that that has anything to do with anything) who is fond of spouting doom and gloom wherever he goes (he is troubled, we must pray for him). Some of his choice bible verses:
Luke 12:51
"Do you think I came to bring peace on earth? No, I tell you, but division."--Jesus

Before I loose my self control and start going off on people, I think I should ask the question that has taken far too long to get to: Why this big dichotomy? I don't understand, especially since we learn that the two greatest commandments are to first love God, then thy neighbor. Does he need extra prayers, or does he have a point, and am I missing something?

I'm sorry this question is so vague, and I know I haven't asked it very well. Any thoughts or remarks you have would be greatly appreciated, and if you choose to answer it as a post, feel free to edit my words as you see fit.

sister, i could show you 'ethylene's beauty shop,' my all time favorite name for a salon, for a poor woman who was named for an organic chemical.

among the apostles, thomas was called 'the twin' while james and john were brothers, sons of zebedee, and called boanerges, which means sons of thunder. maybe my parents should have thought about that before naming my twin brothers "james" and "john"!!!

then again, thomas was "doubting thomas" so i think i'd go with cosmas and damian or just forget the whole twin theme for patron saints and give them each his/her own patron saint. i know that twins are too often called "the twins" and they often get tired of it, wanting to be seen as individuals and called by their names.

May I weigh in? First, welcome home!

I think we may gain a lot from Protestants (some of them, anyway) in their joy and enthusiasm. Many Catholics seem like permanent funeral observers.

I'm not sure if I understood your question about dichotomy, but here goes.

You are, of course, correct about the commandments, but it doesn't end there.

We also have evil in the world. We are in a battle, and not everyone fares well. Even the most faithful Christians are given different sets of strengths, and succumb to different weaknesses, so our Christian life is not always exemplary...or fun.

Your friend may be forgetting that the battle has already been won by Christ, but the enemy hasn't lain down yet. He may have had a life that makes it hard to accentuate the positive. He may also be depressed. (As someone who battles depression myself, I think it's weird that so many Christians have this problem. I think the biggest problem is that we are human, and are heir to things like chemical imbalances, and other illnesses. We are also heir to being victims of others' evil...and that can cause longterm damage to ones worldview.

Loving God does not always deal with those things with what we would call a 'cure'.

Scripture does have many places where Jesus does not come across as the big peacemaking marshmallow that we are often expected to believe He is. Disunity will exist where all do not follow Christ perfectly. And Jesus expects this.

I would suggest prayer for your friend anyway, regardless of the reasons for his viewpoint!

Hello sister,
I have a question: would you know of a saint who had a non-Catholic spouse? I only know of Elizabeth Leseur (whose cause for canonization is currently being pushed forward).

Thanks in advance, and God bless!

I am in search of the Patron Saint for finding a job, if there is one. Can you recommend someone for me? thank you-
Sincerely,

Hi Sister, I have a pretty intense request. The other day my sister, who is in college, confided in me that many years ago, while in middle school, she was raped by a stranger while on her way home from school. She has never told anyone before (hence my pseudonym in this comment) but I'm so glad she opened up to me. I suggested some resources for her on her campus for counseling and health, but I am calling on all my friends to pray for her (without detailing the reason for the intention). Do you know a particular saint or saints whose intercession I can seek on her behalf?
Fellow readers, please pray for my sister's healing.
Thank you and God bless.

St. Elizabeth Ann Seton converted after her husband's death, so he was never Catholic. That's a recent saint. If you want to go back further in history, St. Monica would be my choice. Patricius was a pagan. There are many, many saints with non-Catholic husbands.
SMM

JP- I will try to respond at length later, but I just wanted to say thank you so much for your thoughts on this topic. I really appreciate it. I know I didn't word it well, but your answer was simply fabulous. Thank you so much. May God bless you and all the readers of this blog, along with Sister!

As someone who has been in your sister's shoes, I personally recommend St. Agatha.