Another Set of Twins 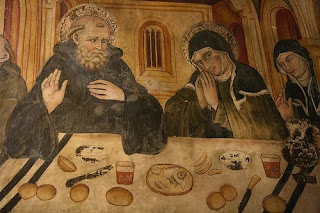 Our discussion the other day of twins brought some interesting reader comments. Someone suggested the holy brother and sister duo St. Scholastica and St. Benedict. I love that story!
They are not officially the patron saints of twins, however. But that's okay. There were twins, so I say, go for it.
Besides, they were, it seems, especially close twins. St. Benedict is the St. Benedict, the author of the Rule of Benedict and the founder of the Benedictines. 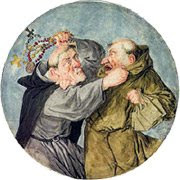 The Rule of Benedict is a very important thing because without it a lot of people in a lot of monasteries might have gone off the deep end and poisoned each other or tripped each other with brooms all day. Fully half of the Rule is how to be humble and obedient and the other half of that half is what to do with people when they aren't.
Extremely important for group living. Benedict himself famously survived two poisoning attempts. The first was in his cup, which shattered when he prayed over it and the second was in a hunk of bread. When he prayed over that, a raven swooped down and flew off with it. Poor raven. I guess we are supposed to imagine that the raven just swooped down for humanitarian reasons and dropped the poisoned bread off somewhere safe like a little birdy bomb squad.
That's what I like to think.
St. Scholastica ran a convent not far from Benedict and once a month or so she would visit him at his monastery. She couldn't go in with all the boys, so he met her at a little cottage just outside the monastery walls. They would talk for hours, probably about what to do with people who could not remain humble and obedient, but also about theology and philosophy and how the Vikings were doing.
No they didn't. Neither of them were very much into sports, I imagine. 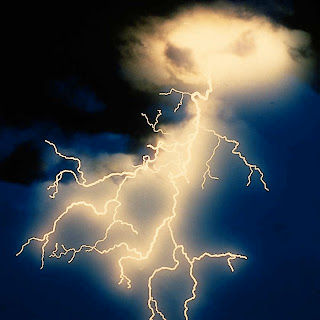 At any rate, during one of these visits, as the clock ticked on, Benedict announced that he had to get back to his cell and Scholastica begged him to stay and talk longer. He refused. She bowed her head and prayed. A wild storm arose. "What did you do?" he famously asked her. "I asked you to stay and you refused, so I asked God to make you stay and he didn't refuse", she famously replied. I believe she also made some sort of snippy comment like, "Go on, try to get to your cell."
So St. Benedict stayed through the night and they talked and talked. Perhaps St. Benedict formulated another rule to add to his list about what you get to pray for after you've been told "no" by the monastery head.
St. Scholastica never made it back to her convent after that visit. She died just three days later. St. Benedict must have been happy to have had an extra long last visit. He said he saw her soul rise to heaven.
So St. Scholastica is the patron saint of convulsive children, nuns and is invoked against storms. Personally, I would invoke her for any type of weather issues, in particular during a drought!
St. Benedict has a very long list of patronages, although as I said, twins is not on there with the gall stones, nettle rash and spelunkers.
Dear Sister Mary Martha;

I am in search of the Patron Saint for finding a job, if there is one. Can you recommend someone for me? thank you-
Sincerely,

Shannon
Yes, I can! In my shop I have our beloved Pope John Paul II down for that. He's not a saint just yet, but I have every confidence that he is in heaven. Can you think of anyone, anywhere, who had a job they loved longer than Pope John Paul. He has got to be the patron saint of finding a great job that you stay with for the rest of your life.
Posted by Sister Mary Martha at 11:24 AM

My pastor (Protestant) is starting to talk about how all the major religions are "different paths up the same mountain to God" and how debates on homosexuality and abortion are outdated. It all sounds very new age-y to me, as I flirted with the new age movement for awhile. My question is, what should I do? I want to come to my Catholic church but my husband vehemently doesn't. He said I could go without him, but I'm afraid he won't go to church at all without me. Right now we're in wait and see mode, but I feel like something very dangerous is happening here. Thanks for any remarks.

Sister, I chuckled about the storm and sibling rivalry. It gives me hope for my 4 kids as adults.

And Jennie, my non-Catholic husband does not go to church. He said he doesn't want to deal with the questions (translation: judgment) about where his wife is and why she's not there with him.
If you feel called home to your roots, is there a Saturday vigil Mass you can attend, so that you're still able to go to church with your husband on Sunday? I tried to make that compromise with my husband but he ended up never going anywhere on Sunday. I decided that the kids and I were going to whatever Mass was conducive for us. I couldn't torture the kids by over-church-ing them all weekend. So Sunday at noon it is. As for the new-age stuff, let Scripture be your guide. Plus you'd be talking in their "language" anyway, since they hold fast to that Sola Scriptura stance of theirs.

Jenny, if you feel drawn to the Catholic church, you should go. Let God take care of your husband. He's totally capable.

Thanks Feisty Irish Wench! BTW, I love your name. Maybe I could be a Feisty American Wench:)

When my daughter was 2 she had brain surgery. She recovered well, but has developed seizures. Who would be a good Patron Saint for her?

I am VERY drawn to the Catholic church, although I've never gone to one (except as a guest). I pray the Rosary, venerate the saints, and keep statues and such in my home. I guess you could say I'm a closet Catholic. Most of my friends don't know and my family thinks I'm either on crack or practicing voodoo. Thanks for your comments. I'll think about what you said.

Check out THAT CATHOLIC SHOW on youtube for a light-hearted look at some Catholic practices. http://www.youtube.com/watch?v=8NFuu6W392k&feature=related

Thanks Diane, I will.

I was going to ask what the heck "spelunking" was, but have just googled it, so never mind. Instead, I'll ask how anyone knows the hunk of bread St. Benedict prayed over was poisoned if a raven flew off with it, unless the raven was then seen eating it and dropped dead while doing so. In which case, as you said sister, poor raven. It would have been nicer if the bread had just disappeared with a small pop.

mph, there's a fair chance that the perpetrators exposed themselves one way or another. I haven't read up on it, but that seems likely to me.

I had always been told that St. Joseph the Worker was the go-to Saint while job-hunting.

CChadbourne said...
This comment has been removed by a blog administrator.
1:36 PM

Sister please bear with me I'll probably end up taking the long way to get to my question.

During an online discussion about Pat Robertson's bone-headed comments about Haiti someone mentioned that Haitians are something like 85% Christian. This brought about another discussion where a poster took offense to this assertion saying that Haitians are Roman Catholics and not in fact Christians.

I've encountered this before. I don't understand. What brings about this belief Roman Catholics are not Christian or lesser Christians than those of other denominations? I'm confused.

that particular twaddle has numerous roots. The most prominent and "scholarly" still cited is Alexander Hislop's "The Two Babylons." See http://www.catholic.com/library/Is_Catholicism_Pagan.asp for refutation.