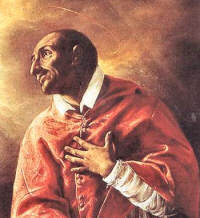 I've followed your blog for quite some time but I don't recall hearing about the saint for the colon ("guts") or intestines. My sister-in-law's sister-in-law has lived with a colostomy bag for years. Recently the dear lady (who is a kindergarten teacher) had to go in for maintenance and cleaning of the opening. She was terrified of this and the worst did occur as now she is filled with infection and they are unable to put everything back in that needs to go in. My sister-in-law is interested in becoming a Catholic--so if we could provide her with a patron saint to help with this difficulty that would be great for her and her sister-in-law. I hope this wasn't too confusing!
Thank you, Linda
I should never check my comments section after lunch.
The poor dear! Where are the things that are out that are supposed to go back in now? I can't imagine. What an awful situation.
But of course, we have a saint for that. I suppose I should have T-shirts made up that say, "Got Saint?"
St. Charles Borromeo is your below the waistline man. He's the patron saint for anything that might be ailing you down south. I don't know why. I have an educated guess.
Charles' uncle was Pope Pius IV. Martin Luther and King Henry VIII had forever changed Christiandom. The clergy was still in disarray, the Council of Trent had been suspended. The Pope called his nephew to Rome to help iron things out and Charles worked tirelessly to convince everyone to reconvene the Council. The result is known as "the Reformation".
Before I try to explain why I think St. Charles is the patron saint for guts, let me explain what he had to do after the Council of Trent addressed all the problems of the Protestant revolt. 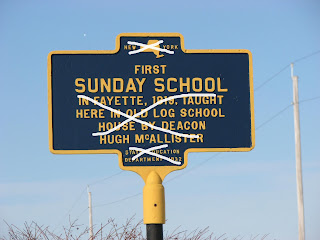 He invented Sunday school. That's right! He realized he had to get everyone on the same page and it would be very helpful if children understood their Faith from an early age. He rewrote books and catechisms and set up study groups. And then he had to tackle the miscreant clergy. He spent the rest of his life at it.
And here's where my theory begins. The miscreant clergy were happy to stay right where they were, doing just what they were doing. Charles had to travel all over and talk and threaten and give them the what for. In Switzerland, one order barricaded themselves in their monastery with guns and when Charles showed up they shot the crucifix right out of his hand. He had to fix their wagon. He had to clean their clock.
And eventually, there was a plot to assassinate him. The gunman shot him in the back while he was praying in church. Charles thought himself a goner, but he instructed everyone to go on praying. As it turned out, however, the bullet was stopped by his heavy priestly robes where it penetrated all the way down to his skin, leaving a raised mark that never left him.
And what to they call that kind of bravery? Intenstinal fortitude.
Or...
Perhaps always having to confront people who were sure to put up a big stink was enough to give anybody a stomach ache.
Or...
It has something to do with the miracles associated with his canonization. I haven't turned up anything like that, though. 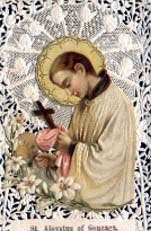 St. Charles is an extra good patron saint for your sister in law's sister in law, because he was so good at bringing people back to the Church and educating them in the Faith. A perfect saint match!
Sister St. Aloysius is prodding me to also mention that St. Charles Borromeo was the person that administered First Holy Communion to St. Aloysius when little Luigi (who became St. Aloysius) was twelve years old.
And before we part today, I'd like to commend you on knowing the intimate details of your sister in law's sister in law. You must have a wonderful, caring extended family.
Posted by Sister Mary Martha at 6:01 PM

I read a lot of the 'lol' blogs (photos with clever captions). I'm using that as an excuse, because when I came to your site today, it really looked like "Hi Sister Mary Martha" was the caption to St. Charles Borromeo's picture.

It makes him look like he's greeting an old friend.

Now I understand why you sent me the St. Charles Borromeo medal before my colon re-section (which went so well I could have been the poster person for belly surgery. I recovered very quickly and needed almost no pain meds.)

Thanks St. C.B. and the many friends and family who prayed for me and Sr. M. M.

Do you know of any saints who felt that they were constantly under a cloud? Jinxed. Or that God's blessings were being blocked.

Also do you know any prayers to remedy the situation

Thank you sister Mary Martha. St. Charles Borromeo is our man! Your post was so educational and your comments were kind. I appreciate your time and effort. God Bless you!

Hi Sister, even though it's still a couple of weeks away I have a lent question for you. I am 16 weeks pregnant and I think the catechism says that pregnant women are exempted from the obligation to fast on Ash Wednesday. I was wondering if that was true, could you recommend any other type of fasting or penance that doesn't involve food or anything too physical which could put stress on my baby.

Dear Sister Mary Martha,
I have a question for you, if I may. I am asking it here be because you don't seem to have a questions here icon. So my question is who is the patron saint of Winning the Lottery? Is there a Saint associated with the correct numbers coming up? I value your sound advice.

Huge thanks, I love your Blog and read it religiously each day.

Dear Sister Mary Martha,
I'm in need of a lot of help, as well as my peers. I am a college student currently taking organic chemistry, which is throwing me through fire loops! Granted I love my vocation as a student deeply, I was wondering if you knew of a patron saint I could especially ask for help from. Any chemists out there?

Dear Sister Mary Martha,
Im 24 and my husband is 23
I was married april of 08 had my 1st daughter december 24 2008 and my 2nd daughter January 5 2010 (apperntly I'm brain dead in NFP) we are living hand and mouth as it is I dont know what Id do without my beautiful girls Id love more kids but we cant afford anymore (Cant afford what we have) do you know a good Patron Saint to prevent pregnancy or another Catholic approved form of Birth control.
Thanks,
Jen

St. Albert the Great is the saint for you!

I just love this site! I learn a lot, and love the writing style. This was an especially interesting post....