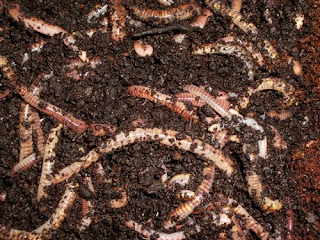 The weeding has been accomplished. The soil amending has not. One of my kind readers sent over a link to an article about 'lasagna' amending, though and I am definitely going to go for that in some parts of our little garden. This basically involves composting right on the ground. No tilling and digging. I'm sure I can get away with it over in the 'dead zone' where nothing is growing these days and then use the 'part two' method for where we actually need to plant.
We don't have any of our own compost since the whole bee incident. We never got our compost bin back in the game. Any second though, one of us might be compelled to muck around in the worm farm. Maybe some of the worms will get sprung from their work camp and go to live in the garden. I don't really mind mucking around with the worms, it's just so very messy to drag the canister out and put it in the sun so the worms leave the top layer.
I can tell you, they don't really do what the instructions say they do, either. They don't really leave when you take the top off and go to a lower layer. If they do, it must take eons. I always end up picking about a million worms out of the goo I want for the garden. The last time I did it, all I saw when I closed my eyes were worms, worms, worms. It took hours and hours, both tot harvest the castings and to stop seeing worms when I closed my eyes.
I'll offer it up for the Poor Souls in Purgatory and for the fallen that have gone on to Purgatory here on Memorial Day. I think the last time I dug around in the worms it was also Memorial Day. Memorial Day has become worm casting harvest day around here.
Is that wrong? Perhaps I should pick another day in the future.
Speaking of wrong. A reader takes issue with our notes about the rosary as a sacramental.
It's my understanding that a rosary isn't a sacramental unless a priest has blessed it.
You're not entirely wrong. But there is some confusion. There is more than one type of sacramental and that's where we've gone a little haywire here.
We think of a lot of things as sacramentals that aren't actually sacramentals....yet. 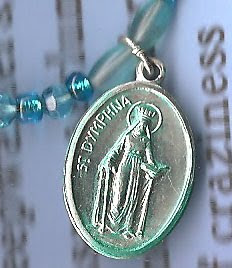 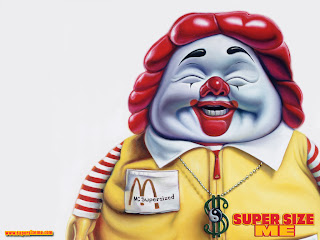 Hi Sister,
I'm wondering if you can recommend saints I should ask to pray for my mother. She's 79 and suffering from Alzheimer's. She has never really been a person of faith; she was never an atheist but was only sporadically a practicing Christian. Now, she really isn't capable of embracing faith. Is there a particular novena you would recommend that I make on her behalf?

Thanks for all you do -- I love your blog!

I used the "lasagna" method a few years ago to prepare a bed for my rose hedge. It works wonderfully! It's true that weeds don't come up from the bottom, but weed seeds that are flying about find a super-rich place to land and sprout. So there's always weeding to you to do--sorry about that! MM

It's a big fat sin to sell blessed objects, by the way.
That explains why there are never any rosaries for sale at the thrift stores, then. How do you dispose of a blessed object if it breaks, or is a really ugly one you inherited from grandma, or something?
How do you get your rosary blessed? do you just take it to a priest and ask him, or is there a special time for it at church? do you have to pay him?

We took our rosaries to Mass, and asked Father to bless them afterwards, which he did.

Blessed objects are to be buried. You don't burn them and you absolutely do NOT throw them in the trash!

If a blessed object breaks or becomes worn out, it must be burned or buried.

Some time back, I was given a bag of 'priest robes' by someone who had bought them at a rummage sale (!) for crafts.

The crafts didn't get done and I was given the garments with "You must know what to do with them?".

I hated to do it. They were not very nice robes, except for the rose cope, but still...anyway, they have risen to heaven as smoke.

Except for the rose cope, which hangs in my closet in hope that I can find a priest who wants it. It is lovely.

Surely it's not a sin for a church shop to sell a sacramental? It would make more sense for the priest to do a combined blessing of everything in the shop rather than have people coming up to him every five minutes to get something blessed.

I didn't know it was wrong to 'rescue' rosaries and the like at antique shops, etc. I have purchased some sweet little rosaries and such, but I wouldn't know if they were blessed or not-hopefully I'm not struck by lightening by giving these little items a loving and appreciative home...

Churches can sell sacramentals, but not blessed ones.

If you buy a rosary with a bubble of water from Lourdes in it, for instance, you are paying for the rosary, not the blessing in the water.

Which begs the question...should they be selling Lourdes water? It is not unusual to see this.

Question: When I was a wee small child, one of my teachers told me that you could pray the decades of the rosary throughout the day, i.e. one here and one there and not necessarily all at once. The completion of the rosary (and the meditation upon thereof) was what was important.

But you noted that "The recitation of a third part only of the Rosary suffices; but the five decades must be recited continuously. "

PS: Sts. Marcellinus and Peter and since there are two of them, I guess that's four "feet."

Helenrr,
the sin depends on intent. Selling sacramentals smacks of simony. If you pay for them with the intent of rescuing them, that's rather different from buying a blessing and/or indulgence.

Thank you Sister! This clears up some confusion for me!

Arkanabar, well, my intent was simply to give these objects a good home where they were respected for what they are/represent. It is odd to see religious artifacts/statues/etc in antique stores, yet what else can be done? It seems wrong to let them slip away with a history that is part of each one...I have always wondered. I don't know if others who purchase these items even realize the significance of them...