Music to Your Ears 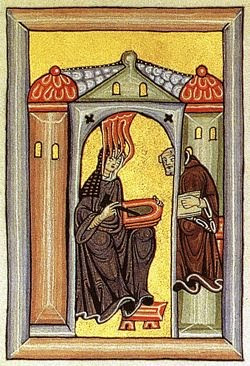 Who is the patron saint of musicians? I am currently struggling as a musician. These days, music from the heart is not supported and instead, "factory-made" music is preferred. It is sad but I am still inspired to continue playing and creating music for the right reasons. Please help me.
Oh Yes! we have just the girl for you!
No doubt everyone thinks I'm about to say St. Cecilia, who is the patron saint of musicians. Truth be told, I can't get all that excited about St. Cecilia as the patron saint of musicians. She's a lovely saint, a virgin/martyr, and there is much to be admired in a young woman who is willing to die for her new found faith. But she wasn't a musician, she really had nothing whatsoever to do with music. She landed that patronage because there is a song or poem about her singing and playing the organ in heaven for the angels or some such thing and that's that.
No, we have the perfect saint for you, although, technically, she's not a saint but a Blessed. We'll talk more about that later.
Blessed Hildegard of Bingen was a prolific writer, healer and composer. Unlike St. Cecilia, who never put pen to page for a single note, Hildegard wrote over 70 pieces that have survived and a whole liturgical drama that is all sung except for a small speaking role for the devil. She is the first composer whose biography is known.
She and her nuns performed her works there at the convent.
She described herself as not so bright all the time and eventually revealed that her work came from heavenly visions. How's that for composing for the "right reasons"? Her songs and writings were shared with kings and Popes.
It's really a shame that she isn't canonized. It's just a fluke, in a way. She's been referred to as a saint by several Popes, including John Paul II and she's in the Calendar of Saints (unlike St. Christopher--we're really going to have to have a chat about all of that again, soon). She was actually one of the first people to which the canonization process was applied.
In the early Church, saints became saints because everyone started calling them saints. They were saints because a cult of veneration grew up around them and that was the end of it. But one too many St. Guineforts, St. Ursulas and St. Philomenas caused the Church to begin to put a lid on that and to try to make sure the person was actually a person, actually had existed in the first place and was actually worthy of veneration.
So poor Hildegard's canonization process took so long that after four attempts it was dropped. I feel safe in calling her a saint, don't you? There are only two requirements to be a saint: dead and in heaven. She's dead. She must be in Heaven given that God talked to her so much while she was alive.
You can actually take up her cause! If you have any information about her whereabouts you can write:
Benediktinerinnenabtei Saint Hildegard Eibingen
Postfach 1320
65378 Rüdesheim am Rhein, Germany
I'm sure she would appreciate it.
And just in time for her feast day, tomorrow!
Posted by Sister Mary Martha at 11:18 AM

Dear Sister Mary Martha,
My name is Theresa and my husband and I just started a new Catholic website: www.catholicchapterhouse.com. I could not find an email so figured this was the best way to connect with you.
I was wondering if you would be able to write a post about our site (it features a store, blog and forum section) and/or link to it on your blog. We are trying to spread the word far and wide.
Thank you for your time,
Sincerely in Christ,
Theresa
theresa@catholicchapterhouse.com

Well, son-of-a-gun, who knew?! No wonder the one time (never tried again) I asked St. Cecilia to intervene, nothing happened... Very cool story about St. Hildegard! Yep, she's gotta be a saint.

NOW, is there a similar powerful saint for the visual arts (i.e. painters, potters and graphic artists)?? Sure need some help with that one!

This is Albin Lijo on behalf of World Christianity site. We work hard to advance the Christian religion, to promote Christian organisations and the charitable institutions they support and to uplift Christian education and learning. Also we conduct prayers and preaching through various camps to help poor. Our aim is, and has always been to uplift the poor and to train them in an occupation to improve their self-esteem. In order to make our site popular to users, I request you to place our site’s link http://worldchristianchurches.blogspot.com in your site so that at any point of time it would be useful to people in need. I would be grateful to get your site’s link. You can see your site’s link http://asksistermarymartha.blogspot.com/ in our Blog roll. May God bless you and shower his love on you.

I love this topic!

There are other saints associated with music too. There is the English St. Dunstan. There are also several women contemporaries of Hildegard, nuns at the Benedictine Abbey at Helfta in Saxony, in particular St. Mechthild of Hackeborn, who was the chantmistress there and was called "God's Nightingale."

Some Carmelites have also been associated with music. Bl. Elizabeth of the Trinity was an accomplished pianist. There's also my great favorite, Fr. Hermann Cohen, aka Père Augustin-Marie du Très Saint Sacrement, who was a piano prodigy before he became a Carmelite:

His cause was opened, but it has been somewhat neglected for various reasons. He's very cool, though, and I talk to him a lot.

Since Jesus was a Jew, is it wrong to portray him in a different culture (like African American or Hispanic, for instance)

An excellent question, Pure Theosis, and I hope Sister MM answers it! I've always believed that it's okay. After all, Jesus of Nazareth probably didn't look much like the reddish-haired, blue-eyed guy we so often see depicted in our culture; we've made Him look like "one of us" to better relate to Him. In the same way, Renaissance paintings of a blonde Mary in clothing and settings of the day were an effort to make her approachable to the people of the time.

My favorite patron saint[s] of music are the Choirs of Angels! I frequently invoke them in regard to music.

...and don't forget St Gregory, a Pope who put chant in its proper place, among other disciplines of the Church.