Nothin' But Blue Skies Do I See 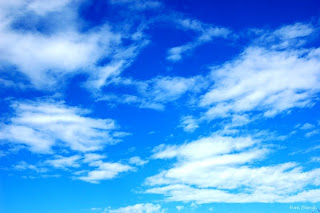 There are things we are not meant to understand. God's universe will always be beyond our comprehension. For example, why is the sky blue? There is a scientific answer to that question, something about the way light refracts through water molecules in the atmosphere. Google it if you really want to know.
But after you find the answer, you still won't know why. You'll know how. But why? Why isn't the sky green after the sunlight moves through the molecules? What is blue? Another example. We know how planes fly, lift and drag and all of that. But we really don't know why. Or maybe we know why, lift and drag and all of that, but we don't know how that would hold up all that giant tonnage, and by tonnage, I am referring to the people who can't even fit into an airplane seat and all the luggage everyone tries to get away with bringing on board. People would still carry an upside down chicken on board if they could and a goat on a string.
I digress.
So, I have often talked about the Catholic use of the term "Sacred Mystery", which means, in Catholic, that which you will never truly understand as a human being and can only guess at the reasons edges so you may as well just let it go.
Or keep trying. I suppose you could end up being a Doctor of the Church like St. Thomas Aquinas. Meanwhile, all the best with the Sacred Mysteries.
I understand what you say by Sacred Mystery, my problem has always just been actually believing and feeling that the bread and wine have become Christ. I want to, I always have, but it's never clicked. (I'm a lapsed cradle Catholic with 12 years of Catholic school.) Any suggestions on how to get my brain/soul/heart/whatever make the leap?
This is a huge problem. It's really the very core of the faith, so you're going to have to get on board and jump on the Sacred Mystery (just let it go and believe it) bandwagon.
The good news is that you are very much not alone in your difficulty. First of all, the whole Protestant Church and all its denominations don't believe in transubstantiation (the $10 word for the miracle that occurs during each Mass). They believe it's all just symbolic.
They are correct in believing that within the walls of their own church. Only a priest can perform the miracle, so there is no transubstantiation taking place over at the Lutheran church.
But then, you're not a Protestant. You can't get away with going the symbolic route.
Still, you're not alone. You may be surprised to find that, now and again, a priest in the process of performing the miracle is having severe doubts.
And every now and again, his doubts will be totally alleviated by what is commonly known as a "Eucharistic Miracle". I say "commonly" know, because it has happened enough times to have the name "Eucharistic Miracle". 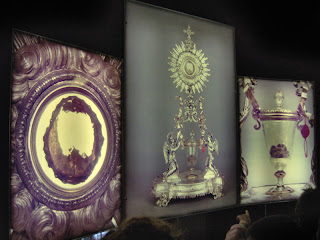 The very first one, as far as I can remember, happened in 700 AD to a doubting monk saying Mass. If I remember correctly, the Host turned into actual flesh and began to bleed. Finally, sometime in the middle of the 16th century someone thought to test it. Yes, it was still around! Details are coming back to me....the blood was in five big sort of drops and, of course, everyone put that together with the Five Wounds of Christ.
Since that time, it has been tested several times, as late as the 1970's and maybe even again in the 90's. The results have never varied. The flesh is human heart tissue and the blood is type AB.
So now we know Jesus' blood type.
It's happened quite a number of other times, almost always, if I'm not mistaken, to a priest struggling with the same doubts you are having. And now, we have it on film!
In this instant, the Host changed to flesh and bled, but after they put it in a Monstrance for the faithful, it also began to glow and pulsate like a beating heart. And here it is:

I hope this helps.
I do understand your difficulty. I've always felt a little sorry for St. Thomas the Apostle who is forever known as "Doubting Thomas" because he was understandably dubious about anyone returning in tact from a crucifixion. I like to give Doubting Thomas the benefit of the doubt. He wanted some flesh and blood proof and Jesus was happy to oblige. Then and now.
Posted by Sister Mary Martha at 11:44 AM

"In this instant, the Host changed to flesh and bled, but after they put it in a Monstrous for the faithful, it also began to glow and pulsate like a beating heart."

Sister would you please correct the type for Monstrance. Would let it go if were not so glaring. Love your blog. God bless. Myra

This is the common view but it is not strictly factually accurate. In any Protestant church that has preserved the sacraments (e.g. Anglican/Episcopalian, Lutheran, Old Catholics) you will find that there are bishops/priests/people who do believe in transubstantiation. This is why Anglicans residing in places where there is no accessible Anglican church can be admitted to Catholic sacraments by the local bishop. In the more protestant Protestant denominations (e.g. Presbyterians, Baptists) it is true that consubstantiation is doctrine. That's why they don't have the weekly eucharist - it doesn't have the same significance for them. Whether or not a denomination is Protestant is mainly related to whether or not they accept the authority of the Pope as the sole head of the church. Consubstantiation vs. transubstantiation is actually a secondary issue and there is considerable variance among the denominations.

I don't know if this helps, from the side of the separated brethren, but I grew up in the Baptist church, being taught, and believing, that the bread and wine were symbols of Jesus sacrifice for us. Some years ago, I began to sense that this was, somehow, incomplete. My heart yearned for such a close union with Christ, but my mind didn't understand how it could be. Over the course of several years, my mind caught up with my heart, and I realized that I did now believe that the bread and wine become the body and blood of the Lord. I found myself at odds with the teaching of my church. I looked around, and found that the Lutherans and the Anglicans believed the same, and I moved to the Lutheran church. It is uncomfortable to have the mind and heart separated, though. My prayers are with your questioner, that God would bring them through to a faith from the whole mind and heart.

Sister, I think you mean that they put it in a monstrance.

And I have read that when the flesh from different eucharistic miracles is compared, it always turns out to be from the same person.

Real quick, I think you mean "monstrance" in place of "monstrous" in this post.

Also, is there an easy way to find your blog posts about specific saints. I was telling a friend about St. Joseph of Cupertino as patron saint of autism, and I thought there might be an easier way to find your postings versus scrolling backwards through them all and hoping it pops up.

Thanks for all you do!

Thanks, Sister, for responding to my question so gently and warmly! By the by, I tell God often that he'll have to forgive my Thomas heart, which I have no doubt He will! I'll keep working on this issue.

Mil,
Blogger has a search function, and as it's essentially a Google site search for the blog, it's pretty good.

There are exceptions to everything. My wife's late father, a Southern Free Will Baptist preacher, taught the True Presence. And who am I to say that God did not in fact perform such a miracle through him?