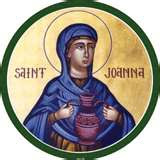 Dear Sister Mary Martha - Is Saint Joanna patron saint for anything?
Actually, no, she isn't. That is to say, as far as I can tell, there is no specific designation of patronage for her.

That won't stop us!
Let's have a look at St. Joanna. You remember in the New Testament, there always seemed to be a group of very faithful women who were very near to Jesus a lot of the time. The loaves and the fishes was not an every day event. These women helped fund Jesus' ministry by feeding the disciples and putting them up in their travels, that sort of thing. There were at least 13 people to feed on a daily basis. Mary Magdelene and Susanna were the other two well to do ladies who chipped in.
And in the end, they were at the foot of the cross. They were rewarded by being the first people to discover that Jesus had risen from the dead.
St. Joanna has the cheery nickname "the myhrr-bearer", because that's what she was carrying on the big day when they went to embalm Jesus and found He didn't need embalming.
Or food anymore, or a place to stay.
The only other thing we know about her is that she was a married lady. Her husband was a steward for King Herod.
So let's see. She could be the patron saint for undertakers, innkeepers, Red Hat Ladies and society dames. She would make a great patron saint for Catholic women's groups, like the Ladies of Charity and those ladies who tirelessly organize fundraisers and card parties, bake sales and car washes.
She would also make a lovely patron saint for those types who are always first on the bandwagon with a good new idea, like solar panels and IPhones.
I'll be interested to hear what our readers think.
Posted by Sister Mary Martha at 8:27 AM

How about patron of perfumeries, since she was carrying myrrh.

Is there a patron saint for those of us who are suffering from arthritis?

My question today is about your blog, the little bar at the bottom for sharing your blog post with facebook, Digg etc, where do you get that? From one blogmistress to another, I'd appreciate your help!
Mary
marynate.blogspot.com

I just found your posts and am thouroughly enjoying them!!

With regard to saints, I would like to know the church's teaching regarding the information I am sharing below.

I am frustrated with her insistance that this saint is not acceptable as a confirmation name choice. After hours of searching the internet I have been unable to find any catholic website or information suggesting that this name is not appropriate for confirmation. In fact, I have read many church approved web-sites that recommend this saint's name as a confirmation choice.

Any information you have to share regarding this concern will be greatly appreciated!

Thank you in advance for your help, and may God continue to bless you as you share with countless others!!!

marynate,
there's an option to add that share bar to your posts in blogger. I'd have to do some poking around to find it, but as I recall, it isn't too difficult to find.

Dear Sister
I think she might be the patron of wives of men who work in unseemly professions. How many people love and pray for a spouse who does not work at something particularly admirable? There's a niche for her! Dr. M.

Jennifer,
I suggest you go over the teacher's head and obtain the permission of the pastor, or even the bishop who will be performing the confirmation.

IMHO, since people name their children Michael, Gabriel, and Raphael, presumably after the angels, how would a confirmation name be any different? In my understanding, a confirmation name is like a baptismal name, except in baptism your parents chose the name (and the faith) for you, and now you're choosing them for yourself.

Thanks for your comments. I appreciate the advice/information you both shared.

I would like to gather some factual data, to review with the teacher, before I go to the pastor or bishop. That way I won't offend her, and maybe we can both learn something that will help not only my son but others who are, or will be, making their confirmation.

Thanks again and God bless!

I see no need for factual data to back up your side, since the teacher has none. Of course an angel is a person, just not a human person. This silly idea would make me wonder what else this teacher is teaching

For accuracy and proof that can be taken to others (including Bishops and Priests) if needed, it's best for everyone to read from cover to cover the "CATECHISM of the CATHOLIC CHURCH, Second Edition" which is the authentic text of the Church on Faith and Morals and was first printed in the US in March, 2000.
It makes a great gift for Christmas and Birthdays.
Angels are not defined as persons. (CCC 329)

I definitely agree angels are not humans nor can a human become an angel. That wasn't a concern. The only question/concern I had/have was whether or not my son could have St. Michael the Archangel for his confirmation saint/name. I also agree with "Anonymous'" suggestion of referring to the Catechism of the Catholic Church. I often refer to this wonderful book.