Fire in the Hole!

Once in a while a question arises that I really don't want to answer. The more uncomfortable I am with broaching a topic, the more I realize it must be broached.  Usually, this feeling occurs when someone asks for some kind of personal advice. That's always a dodgy one, since in this type of format, who knows the whole story, the background, the psychological make-up of a person?  I think it's dangerous territory.

But rarely do I find I'm uncomfortable working on a patron saint matching! I know the answer to this question.

I don't know about patron saints for mental illness, but I'm having surgery tomorrow, and if you know of any saints that cover the digestive system, perhaps you can ask him/her for some intercession for me? I am having 8-10 inches of intestine removed due to diverticulitis. Last time I had surgery (for something else) it was a nightmare. A second surgery followed and I contracted an MRSA infection that took months to clear up. So I'm pretty nervous about tomorrow. I love reading your blogs! Thank you for helping us to strengthen our faith. I'm only 48 years old and am praying this takes care of the medical issues for awhile! 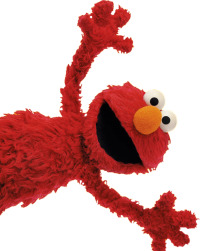 Ugh.  You poor thing.  I have direct experience with loved ones who have been similarly blessed.  And yes, of course, there is a patron saint for the intestines (specifically).  But perhaps you should read this some other time. Perhaps now is a good time to simply invoke St. Erasmus, better know as St. Elmo, or let us invoke him for you, and you just get some bed rest and push that little button attached to your IV.  I'm sure they've told you your prognosis is excellent!

For now, when we think of Elmo, let's just think happy thoughts.

Then, when you're feeling better--say, six weeks from now--you can come back and read the story of St. Erasmus/Elmo.

St. Elmo was a bishop. He lived during a time of persecution.  For a while, he lived the life of a hermit on a mountain top and was fed by a raven.  I mentioned that to someone the other day, who thought I meant he was fed by a raven like a baby bird in a nest, where the bird partially digested his food for him.  No.  The bird merely brought him food.  Like St. Rock's dog.

Life would have been grand for Elmo/Erasmus if he had just stayed up there. But then, who knows how long raven's live?  In any case, he reentered society and things went downhill.

I don't really believe all these things happened to St. Elmo/Erasmus.  I believe his story has been conflated with another saint or two who lived around the same time.  Because if all these things really did happen to him, I picture him a little like the Marvel superhero "Wolverine" who has titanium bones, or some bones made of some metal that doesn't exist.  He can't be harmed because he instantly heals from whatever you do to him. 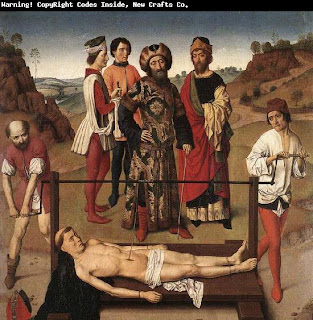 That's what went on with Erasmus/Elmo until they pulled out his intestines and wound them on spindle.  That finally did him in.  Or not.  In another version of his story, he merely had hot hooks hooked into his intestines and miraculously healed (again).  Let's go with that version!  In that version he was finally beheaded.

In the meantime, he had his eyes gouged out (St. Lucy),  had hot oil or tar or something poured on him (St. Catherine of Alexandria), was thrown into a fire (again, St. Catherine), had all manner of hot pokers poked into him (St. Blaise), had all his teeth pulled out (St. Apollonia) and at some point everyone trying to kill him was killed by lightening (St. Barbara) and he was roasted on a grill (St. Lawrence).  He walked away from each of these trials, miraculously healed, like Wolverine.

Which makes him an excellent saint, for you, personally, given your own travails. 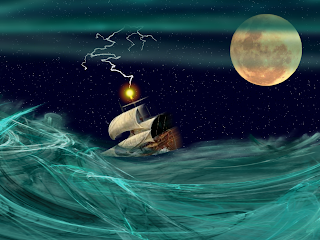 His association with being saved both by and from lightening strikes earned him the appreciation of sailors at sea and the phenomenon "St. Elmo's Fire" being named for him. St. Elmo's Fire, however, is not actually lightening.  It's plasma.

If you have read on, even though you are still recuperating, offer up your sufferings, both from your recent surgery and from reading this blog, to the Poor Souls in Purgatory.  And meanwhile know that our little community here at Ask Sister Mary Martha will have more than a few conversations with St. Erasmus on your behalf.
Posted by Sister Mary Martha at 5:51 PM

Here's what I like about you, Sister, me being non-Catholic and all. You aren't afraid to say that this or that version of the story of a saint may be right (or not). You hold to your faith all the while, keeping a sense of humor. Methinks you could make a lot of converts with this method. I know it has opened my simple mind.

Wow! I feel much better already after reading all that! Things don't seem nearly as bad now :). Thank you for your thoughts and prayers! I do appreciate them, and will offer up any of my sufferings to those souls in purgatory. Thank you again!

Ah - well! At the end, you finally spell E-R-A-S-M-U-S correctly. I can't help it - it's the teacher in me. We know what you meant all those times you wrote Eramus.

The courage of saints never fails to amaze me. All I can think of is "I really hope God doesn't ask that of me!" That's probably not what I'm supposed to take away from it....

I was a substitute catechist for a third grade religious education class in our parish yesterday. I have taught RE for 5 years. I was very frustrated during this class because the children continuously talked and were rude and disrespectful to me and to each other. I tried all of my teacher strategies for getting their attention--nothing seemed to work. I ended up telling them "you are being rude and disrespectful." I tried, over the noise, to teach them about Jesus' love for them and about our lesson of the day which was on St. Paul. It felt chaotic and awful the whole time. Sister, what could I have done to show the love of Christ to these children? Do you have any advice for my friend, who is the regular catechist? Thank you! Linda

St Perpetua has tapped me on the shoulder recently. I thought maybe I would chose a patron saint in response to one of your posts, but I guess that isn't the way it works. She was a educated, a convert, and the patron of my husbands occupation (ranching). I like that stuff. Unfortunately there was that martyrdom thing. And apparently her husband never converted. Not so excited about those aspects! There are a few St Perpetua medals available on the Web, but that is all I could find. I read an awesome book about her called The Bronze Ladder.

What advice would you give to someone who would like to attend Catholic Mass that lives in a home of very strict and closed-minded Protestants? The someone is me, if you couldn't guess. My parents both strongly oppose the Catholic Church (for reasons unbeknownst to me). I'm 21 and I have my own car, so I could just go to Mass on my own I suppose. But then I'm not obeying the whole "Honor thy father and mother" thing, am I? What's a girl to do?

Wow... and I think I have problems. Thank you for a glimpse into the life of St. Elmo.

What a lovely person you are Sister, to take time to answer that question, but to uplift us all. thank for using all the Talons God gave you!
I learn, laugh and love my church a little more each time I visit.
peace,
Judy

I'm a Catholic. But 2 months ago I mistook a protestant church for a catholic, and attended Mass there, and also received communion.

Here in India, most protestant churches are recently build and differ from catholic style. But this one was like a catholic church. I was new to that place then, where I got an internship, away from my home, amongst people speaking a different language. So, I was not aware of the church and was later told the truth.

Now, have I did something wrong. Did the communion received by me cleanse me? I mean was the Lord present in it? Please answer me. N one answers my question, not my granny too (especially the 2nd question).

Amanda Christine,
I'm going to suggest that honoring your Heavenly Father in this case is more important than doing as your earthly father commands. HOWEVER, that doesn't let you off the hook for continuing to treat him as well as you are able, and be as good and dutiful a daughter as you are able.

Another intercessor for the sick is the Archangel Raphael. He's the one who helped cure Tobit.

Hi Sister Mary, Thanks for this blog, it always gives me a laugh! Anyway, our son has down syndrome and Im wondering if you know which saint might we ask for special intercession for him?