More on the St. Michael confirmation name controversy:
According to the definition of the word "person", an angel is indeed a person, as is God (three, in fact).
The teacher obviously meant "human" but even then... I don't see a reason why I can't take Guinefort as a confirmation name. (And it's a doggone good one, if you ask me)
Yes, St. Michael is a person, by the dictionary definition (and how we speak of God). However, I do think this is often how we get into trouble in the Catholic Church and how people (who are persons) get confused. On the one hand, the concepts with which we are dealing require precise language for us to understand. And on the other hand, most people don't talk that way or think that way and then next thing you know everyone is confused.
Ironically, your mention of St. Guinefort is a perfectly good example of how things go right off the rails. 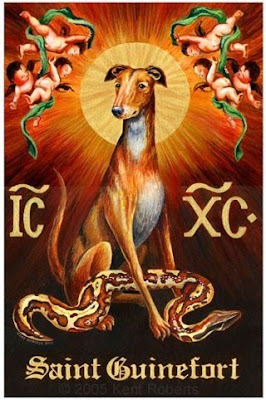 The story of the noble greyhound (somehow, it's always a greyhound) actually dates way, way back to ancient times. There is some sort of noblemen, a king maybe even, who leaves his infant alone while he goes out hunting. Sometimes the noble woman has accompanied him and sometimes there is some sort of nanny who has also taken an ill timed break from the child. The child is always the only child of the important person (human being, not god or angel person).

While everyone's out being the worst parents and caretakers in the world leaving an infant to fend for itself for several hours, a viper comes in and the trusty greyhound tears it to pieces. The baby's bed is upended, the house is a mess and the dog and the house are covered in blood.

When the terrible parents return and see the mess, the baby is nowhere to be found. They see the mess, the lack of baby and the bloody mouthed dog and shriek with grief. The nobleman beheads the trusty greyhound.

Calm down, it never happened. It's a story that has made the rounds in many cultures.

The story ends with the terrible parents finding the baby under his upended crib and the snake parts all around and realizing that the dog had actually saved the child. They feel as terrible as they are and they bury the dog with honors.

This story made the rounds, and somehow when it got to France, the dog had the name Guinefort and they actually had a shrine where the dog was buried. (Actually he was thrown down a well and that was made into a shrine, if we need to be very precise.)
Here's where the story actually gets pretty funny, if it wasn't so tragic. The shrine in France becomes so popular as a baby saving saintly place that people are bringing their babies from miles around.

We have to step aside for one moment and make sure we're all on the same page here in the understanding that Catholic sainthood (the process of canonization)very often begins in just this fashion. Saints are made by having a cult (there's a loaded word that has come to mean something other than what it actually means!) built up around them. After the dead person (former member of the human race) has been venerated and miracles are occurring at his tomb, the Church will step in and take a look, make sure the person is worthy of veneration, dig the remains up to make sure that's really him in there, study the life of the individual to see if he was more holy than not (no one's perfect) and check to see if any actual miracles have taken place.
So, back to the Guinefort shrine. The Church sends out their man who is utterly dismayed to find that the 'saint' in the shrine is a dog. I'm sure he would have laughed if it wasn't so tragic that so many people were on the "a dog can be a saint" bandwagon. I'm not sure he knew that the noble greyhound story had been making the rounds for hundred of years. The poor French people. I wonder if they have sent money to the Nigerian millionaire who needs help. In any case, the priest ordered the shrine destroyed and it was destroyed. 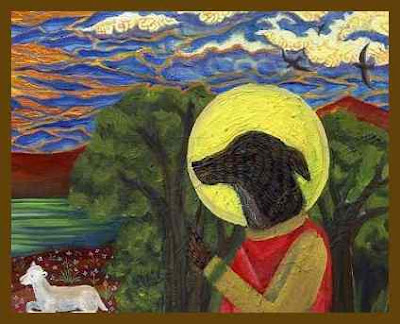 And when he left, they built it right back up again and went on with St. Guinefort.

In a side note, in defense of the poor French peasants, St. Christopher is sometimes depicted with the head of a dog. St. Christopher, who also made the Church's "no fly" list a while back has many legends attached to him, one of which is that he was extremely handsome and asked not to be so handsome because of the burden of temptation and was given a dog head. And even that story may have only arisen because, in some language or another, "Christopher" is very close to their word for "dog head". I wish I was kidding. The poor French peasants may have at some time seen that depiction and thought that dogs as saints were acceptable.

You really can't take just any old name for your Confirmation name. You can't have Paul Bunyon or his Blue Ox Babe, you can't have "Large Marge", and you certainly can't have Guinefort. Unless, that is, some day there is a person--a former human being--who is dead and in heaven and therefore worthy of our veneration who has at least two miracles under his belt with the name Guinefort.
Posted by Sister Mary Martha at 9:45 AM

There was a dog "Pep" incarcerated in the Eastern State Penitentiary. He supposedly bit some member of the wardens family and went to jail

Here is the link http://www.easternstate.org/store/clothing.php

You can get a T shirt with Peps picture on it.

That tour was very interesting and scary.

Here we go again! This is how rumors gain traction. St. Christopher was NOT put on the "no fly" list. He was dropped from the Universal calendar. He is still very much on some local calendars. Not every Saint is celebrated in every country. For example, if you live in the US, you have not attended a Mass in honor of St. Joan of Arc, have you? But she IS celebrated in France. (I'm not sure if the English celebrate her...) Likewise, over in France, they are not celebrating St. Elizabeth Ann Seton. She has very little following over there. Over here - different story. St. Christopher was dropped from the Universal Calendar for a very good reason: Lack of info. Was he legend? We really don't know. Neither do we know that he was not legend, and therefore - real. His cult has not been suppressed, as the cult of St. Ursula. What we do know is that the name Christopher means Light Bearer. That may be how the legend started. Or, it is just as likely that something very similar to the legend actually did occur, and the name of the martyr was not known, so he was named after his deed. This is what happened in the case of St. Veronica. A nameless woman wiped our Lord's muddy, sweaty, blood soaked face with her veil, which now miraculously bears the true image - Vera Icona. According to Catholic Saints Online, Christopher (whoever he was)died a martyr during the reign of Decius in the third century. Incidentally, we know almost as much about the legends surrounding St. Christopher as we do of the legends surrounding St. Nicholas. We do know there was a bishop by that name. Did he really throw bags of gold through a window or bring pickled children back to life? Doubtful - but he's WAY to popular to even attempt removing him from the Universal Calendar though, so he stays put.
A Catholic School Teacher

Wow, I never knew. Where does St. Francis fall into all of this? Isn't he the patron of animals? Hmmmm, v. interesting.

Sister Mary Martha, you remind me of the sisters who taught me in grade school. They were often considered fierce merely because they were not fainthearted. I wouldn't have attempted to make sense of this particular legend (wouldn't have touched it with a ten-foot-pole), but hats off to you for this amazing explanation. It's wonderful to be informed whilst so roundly entertained. It reminds me of the radio personality in the States who had to inform his audience that his "campaign to clothe naked animals" was JUST A JOKE AND WOULD THEY PLEASE STOP SENDING HIM MONEY (over a $1000 had been mailed to him). People do love animals to a fault at times.

It not be a good confirmation name, but I think St. Guinefort is a fine name for a dog! I always get girl dogs though, so that one's out.

The Christopher/Dog Head one is new to me though. I'm going to blame that one on a Medieval game of "telephone" where what starts out as "Please kneel when you hear the bells" gets repeated poorly enough times and turns into "I love your monkey cheese wheel!"

We Now Have a Patron Saint for Furry Fandom!

(Well, Guinefort would make a good replacement for Anubis, who judging from the amount of furry art seems to be the fandom's current paranormal patron.)

As the uniformed NYPD cop put it after someone tried to carjack his marked police car with him in it:
"What a town, huh?"

I wish that you were a history teacher, because if you were, I would sign up to be in your class.

Thanks for you information and humor that never disappoints.