The Patron Saint of the Fourth of July 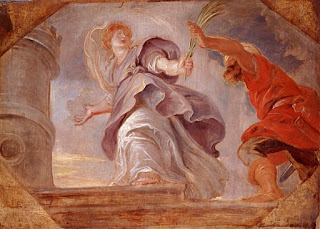 I always think of Rapunzel when I think of St. Barbara, but apparently a lot of people think of a lot of things when they think of her, including fireworks.

Her story right quick: A holy girl with a crazy father who was trying to keep the boys away from her. He kept her locked in a tower during his absence. There were two windows in the tower and since Barbara was actually a holy girl who really just prayed in there, she had a third window cut into the tower as a symbol of the Holy Spirit. When her father came home he was instantly convinced that she had the third window installed to let the boys in. I don't know why the other two windows weren't enough for the boys. Maybe the new one was considerably lower.

In any case, he dragged Barbara out of the tower and killed her.

Where do the fireworks come in? The second he killed her, he was struck down by lightening. Like that little girl at the end of "The Bad Seed".

So, while I'm thinking about Rapunzel, other people are thinking about barbiturates (named after her because they were invented on her feast day), fires, firemen, storms and sailors (because her tower reminds people of a light house).  Because of the lightening and fireworks, she became associated with artillery men and bombers and explosives and people who work with explosives and because of the sailors, the Navy. And because of her sudden death, she is the patron of receiving Last Rites and sudden death and explosions and storms at sea that can spring up out of nowhere and kill everyone on board ship.  Which is why the city of Santa Barbara is named for her, because of a Spanish sea captain who nearly sunk off the shore of California in a sudden storm, but was saved by invoking her intercession.

While you're enjoying the nighttime displays, sparklers, bottle rockets and burning snakes, give a quick salute to St. Barbara while you still have all your fingers.
Posted by Sister Mary Martha at 11:50 AM

When my mother spoke to our priest about the guilt she felt for putting pur family dog down, he told her it was not a sin because dogs have no souls. Do Catholics believe this? Will there be no dogs in heaven?