All the Better to Eat You With 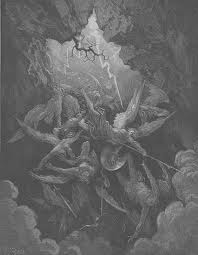 "Angels certainly seem to do a lot better with their free will than we do. Once the Lucifer situation was settled, it seems no other angel has had so much as an unkind thought." I must correct you Sister. There are many more Angels that have left heaven, and the church knows this too. First, The Church teaches ( even the earliest Apostles taught this ) that we are to ask the name of any angel we meet with. ( This must mean that then the Church can compare notes. :) Second, There are many scripture reference to more then one angel gone bad ( The Church has said "It is written that no angel tormenting men and women is a heavenly Angel".)

I'm not confused, but it appears I have confused you.

The War in Heaven wasn't just Satan, nee Lucifer.  It was Lucifer and his minions. They lost the war and God booted them out of Heaven. They have spent the rest of their time making everyone on earth miserable to the best of their ability. They all had free will.

We hope.  They do have free will. 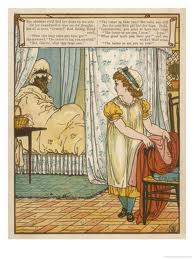 It's an interesting point you bring up that we must ask the name of any angel we meet.  The reason for that is the same reason we are not allowed to attend seances and dabble in the occult, even if it seems rather harmless to try and ask dear old sweet Aunt Mildred where she kept the safe deposit box or just reminisce with her.  She may sound like dear sweet old Aunt Mildred at the seance, but she could actually be nasty old Aunt Bealzebub.  The devil is tricky.

Like the wolf at the end of Red Riding Hood. But not that obvious.

I'm not sure what good it would do to ask the angel his name.  If the devil is going to pose as an angel, I'm sure he is not beyond lying about his name.  I think the point was that we must be on guard when it comes to the supernatural.

It is written that no angel tormenting men and women is a heavenly Angel. That is why the Church demands two miracles for canonization. Precisely because no good comes from the devil.

That glob of chocolate still makes me sad.
Posted by Sister Mary Martha at 10:42 AM

Could you please tell me where you get the photos that you use in your blog posts?

Thank you! And I love your blog, and always learn something.

Dear Sister,
Our priest explained the Satan/minions/Michael and the Good Guys thing this way: Angels don't need to study and research things. They look at it and know where they stand. So, when God created them and they found out that God would become Incarnate, they knew right away whether or not they would serve Him. So they whole rebellion thing wasn't/isn't drawn out. They've all decided and It's over with for the Angels.

Before explaining as best I can what I started to let me say, I will try again. The Church believes that the war fought in Heaven was at the beginning of time. As we look at the books that come after that we come to a book called Job. It is recorded in the book of Job that Lucifer found a way, after being kicked out of Heaven, to once more sneak into Heaven ( may be through a back door or something, he he! ) for what ever reason to be had. ( Job1:6 "Now there was a day when the sons of God came to present themselves before the LORD, and Satan came also among them." ) It was a meeting of Angels ( sons of God ). There is more to the story but this is simply it, that AFTER the great war in Heaven, After Lucifer was thrown out of Heaven with all his followers, he managed to once more appear in heaven. Now, call this stupid talk if you wish but I gave the scripture proof. Now on to what I first had planed to put in the blog.
Sister, you have stated one point of view that the Church has taken, that the biggest part of the fight has ended. One opinion that is simply a literal translation of Bible scripture claiming that "The Bible does not indicate that it is possible for more of the angels to sin" ( http://www.gotquestions.org/angels-sin.html ). Well, in a literal sense it can not be found there so this suggests to those readers that there is no other then a definite two, heavenly and fallen. Proof of this is the Devil's original intent, according to Bible and how all Catholic are taught the devil was only wanting to gain the support of other angels, his main goal was to get as many as he could, he felt that by getting the larger number he could win. Is it literal to believe that today the Devil is still the Devil with the same goal in mind, if so then he is NOT mainly after only MEN AND WOMEN, but STILL after heavenly ANGELS. If the devil has changed and has a new plan then the Church must let us all know, and they have not done this. For this to be literal he would have to be after ONLY Heavenly Angels ( and there are heavenly Angels with us ).
( In translation theory, another term for "literal translation" is "metaphrase"; and for phrasal ("sense") translation — "paraphrase." http://en.wikipedia.org/wiki/Literal_translation ) Though I prefer not to argue any of this, in the Bible book of Revelation *numbers *that *grow ( in Math we call this "number addition", addition in math ) and *numbers *that *are *lessoning ( in math we call this "number subtraction" or "subtraction" ) are hard to understand by 'literal learners' who often get them wrong, the number of Angels ARE growing, and too the Devil's fight is NO LESS. These ARE numbers in the book of Revelation. To be silly here, for example, to claim that because the Devil can not gain more Angel followers he is now coming after us is stupid, we are all taught that God created hell for the devil and not us, to substitute the Devil's loss of more followers with our going to hell is an invalid argument. For the whole Church to say that proof of no proof is proof of a theoretical opposite is also stupid ( I mean stupid in a nice way ). Heaven is no more "up" then hell is "down". Yes, the Devil is still trying to gain more Angels, and, Heavenly Angels are still trying to secure Heaven ( Thank God! ).
You are loved!