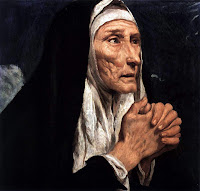 I can't believe I am about to be on top of a feast day two feast days in a row! And school starts next week. Sometimes we are more efficient when we are busy.  That or the angels and saints are prodding me to get their messages out.

Today is the feast day of one of my favorite saints, St. Monica. This is my favorite rendering of St. Monica, as I imagine that someone who lived a life of worry might have looked like this by the end of it. But St. Monica actually wasn't a sad person. She was patient and steadfast. And unstoppable.
Her parents married their Christian daughter off to a pagan with a hot temper. He wasn't the worst fellow but he did yell at her and tease her about her Christian fasting and charity work. Her mother in law was nasty to her and lived with them. 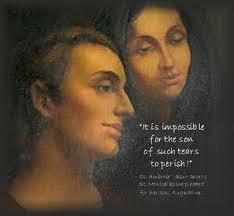 But Monica soldiered on and they both converted. Her husband was baptized a week before his death. Monica's super famous son, Augustine was 17 when his father died. Augustine was a wild child, even by today's standards and Monica followed him everywhere, much to his chagrine. He finally snuck out of town to Rome. She followed him there, not an easy thing to do back in those days, all on her own. When she finally arrived in Rome, she found he had gone to Milan. So off she went. We all know how Augustine turned out. He is once of the greatest saints and scholars the Church has ever know.

Thanks mom!  Her story is pertinent to today's question from a reader:
A year ago we got a new priest at our parish. Over the year he has done numerous things to cause resentment in some of our congregation. I won't go into details, but I walked out of mass crying after his last "homily" wondering what he was doing being a Catholic priest. I wrote our Archbishop about some of the things he said and hoped that it would bring to light the need our area has for a conservative priest. I have never done anything like that before. I mean, we don't need a Latin priest, we at least need a priest who isn't so wishy washy on Catholic teaching. One that will uphold the faith, not denounce it from the pulpit. The churches in our area are fairly liberal as well. Lots of hand holding and drums. So what is a Catholic to do in this situation? It makes me ache that I can either go to a mass that feels more like a '60's sit-in or go to a mass where the priest says he can't defend or teach.

I wish you had gone into details, because it's actually impossible to address your question without them.

I think it was a good idea to write to the Archbishop about your concerns. He can tell you if the priest is way off base or not. I can't take your word for it, quite.  I'm not saying you're wrong. I just have no way of knowing if you're right.

Because Jesus was not, by any means, a conservative person. His message was and remains a radical departure from normal human emotions and reactions.  "Turn the other cheek?" Seriously? Who does that? "Take no shoes, take no purse?"  He must mean that kind of symbolically, right?  He must have just meant, "travel light".

But when we read everything He said, we come to understand, often with a rather sinking feeling, that He was dead serious.  I've known people who have turned away from the Church because they just feel they can't possibly live up to what Jesus asked of them.

So I'd like to know more about what the priest is saying up there.  Maybe he's just giving everyone that sinking feeling.

As far as going to a Mass that feels like a 60's sit in, take a tip from St. Monica.  When she moved from her home to Rome and then to Milan, she felt completely at sea because the customs of all three places were differently. She was accustomed to fasting on Saturday. They didn't fast on Saturday in Milan.

I don't know why she couldn't just fast on her own on Saturday. Fasting is not exactly something you do with other people. I would understand it better if she was used to going to a Rosary circle on Saturday and the people of Milan did that on Tuesdays.

Maybe Monica understood the power of all manner of prayer when it is done with others, even if there are bongos involved.

She also went to the Archbishop, St. Ambrose, to ask how to proceed. This was his famous reply:
“When I am here, I do not fast on Saturday, but I fast when I am in Rome; do the same and always follow the custom and discipline of the Church as it is observed in the particular locality in which you find yourself.”

Yes, it was St. Ambrose who gave us the line, "When in Rome do as the Romans do."  He didn't say it quite that way, much the way Humphrey Bogart actually never said, "Play it again, Sam." Nonetheless, that famous quote is from St. Ambrose to help St. Monica with exactly the type of problem you are having.

I think St. Ambrose is trying to help you now.
Posted by Sister Mary Martha at 1:01 PM

Hi Sister Mary Martha. Say a prayer for me if you can. I have a demanding job, I'm a little depressed, and spiritually confused. I live in Houston, and I was actually praying the hurricane would come here so I could get away for a few days. Thanks, one of your loyal readers.

“When I am here, I do not fast on Saturday, but I fast when I am in Rome; do the same and always follow the custom and discipline of the Church as it is observed in the particular locality in which you find yourself.” Thank you Sister. I am certain one, two or three Angels watch over you, if not a small and ample crowd. They have knowledge, they gain strength from your witnessing :)

And today is St. Augustine. How appropriate that he follows his mother in the calendar.

Is this just a culture shock situation or is the priest truly breaking from Catholic doctrine in the pulpit? I would try to reach out to the priest, after much prayer for peace, calm and understanding, by speaking with him about specific issues with the attitude of 1)finding out what he actually believes and why and 2)gentle correction using the Catechism. Pray a ton for him because priests are constantly under attack by the devil to be lead astray so they will be ineffective shepherds of their flocks.

Hi sister, I am the one that wrote the question. I suppose I didn't go into details as I was afraid of being a tattle-tale. And much of what you said is eerily on my mind as we transition through this time. I also want to stress that perhaps conservative was not the right word. Just a way of saying a priest who upholds and defends the faith, even if it goes against popular thought. I meant conservative in the sense of being willing to uphold the faith, even in times of trial. Willing to say those unpopular things, because that is what people need to hear, but love all sinners anyway.

The priest I mentioned, other than running off a beloved associate pastor and offending some other congregation members with gossip, addressed the sex scandal facing the church that one Sunday. He stood on the pulpit and said he could not teach us the Catholic faith, specifically saying, "I cannot teach the Eucharist." He then proceeded to apologize. "We are sorry for abusing you."

I think that sometimes the evil that persists in the world, yes, even in the church, can be overwhelming. But that is when we need to trust God more. That is when the Eucharist becomes necessary! To strengthen us in our battles.

I was so deeply saddened to see him list off numerous Catholic teachings and then proceed to say he could not teach us those in the light of the scandal. I understand that even he suffers from the pain of these mentally ill priests, we all do. But it is not something that is solely in the Catholic church, either. The Catholic church does not have the monopoly on child abuse. It is in every church. I am a convert and I can assure you that I saw it in different churches growing up.

We need strong priests willing to defend the church, especially in times of evil. Not denounce it from the pulpit, then go and celebrate the liturgy of the Eucharist.
I have thought a lot about "turning the other cheek." It has been on my mind a lot lately. But are we not also called to be warriors of Christ? If we continue to turn the other cheek, people start to believe things that aren't true. If we never defend ourselves we are giving the Devil the power to destroy us. We should always forgive, true, but never roll over and let evil have its say.

At the time I wrote you I was so hurt and disappointed. I have realized that it may not be convenient to go to mass far from home, but that is what we will do. Just as St. Monica had to travel the world to look after her son, we will travel our corner of the world to find Jesus; not expecting perfection, that is only found in heaven, but at least a place where the faith is taught without regret.

"We need strong priests willing to defend the church, especially in times of evil. Not denounce it from the pulpit, then go and celebrate the liturgy of the Eucharist.
I have thought a lot about "turning the other cheek." It has been on my mind a lot lately. But are we not also called to be warriors of Christ? If we continue to turn the other cheek, people start to believe things that aren't true. If we never defend ourselves we are giving the Devil the power to destroy us. We should always forgive, true, but never roll over and let evil have its say."

What you typed interpreted as best I can is also "purpose." I have had years to think on sins I have committed. This is purpose. I have seen some extremely wonderful things in life up till now. This is purpose. Without *your purpose Sister Mary Martha and those with her would be wordless at this Blog. The very Church itself you sit with Sunday will start to respond to your purpose. You trust Sister Mary Martha, well then she is a channel. She and those with her are female channels for God's word as I am sure the confessing Catholic Father is. Mankind's purpose fuels even the Angels, our guardians. I do not think you were "hurt" by any of this ( "At the time I wrote you I was so hurt and disappointed." ) but rather given a little more love by the example. Not as great as charity, but in the same sentence. You are right, dangle a specific blessed medal around your neck and be in Church.