Sister, I was wondering if you could shed some light on a particular subject. Being a young woman, of course I find the opposite sex very desirable and attractive. To someone who is currently living a chaste life, what does one do with the desires that one has? I know it is not a sin to desire certain things as a female, but since I'm chaste, where is the line drawn? I could just be over-thinking this subject too. I thought perhaps you may have some interesting insight given that you are both a woman AND a religious:)

I'd like to leave it at that, but I can't do that either. 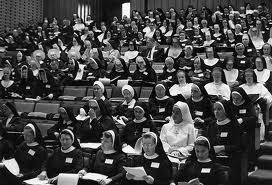 News flash: religious don't run around talking to each other on this topic. With the exception of our confessors, yammering about our 'desires' is dangerous territory. It can be just another way to wallow in those desires.

We are married, for one thing, to a demanding spouse. And we don't just remain chaste until the right man comes along. We remain chaste forever.

But we don't run around talking about it.

The best I can do is at least address where "the line" is.  Let's start with a list of things you can't do:
1.Think about sex too much.
2. Have sex with anyone to who you are not currently married.
3. Look at pornography. 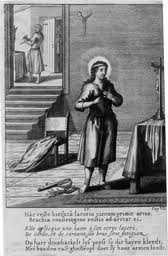 The Church in Her wisdom understands that you actually can't help but think about sex.  Sex will pop into your mind at all hours of the day and night.  That's not a sin. That's your brain at work.

But once those thought pop in there, it's your job to pop them right back out again. Say a rosary, take a cold shower, kneel on dried peas.  What do you think hair shirts were for?

If any of those things cause you tho think about sex even more because you are a sexual deviant who enjoys pain, don't do those things. Stick to the rosary.

What does one do with the desire one has? Fill your time and your head with the Spiritual and Corporal works of mercy. You're supposed to do that anyhow. Step it up.

If you have any time left over, become a long distance runner. Take up archery. Play ping pong. You have four years til the next Olympics.
Posted by Sister Mary Martha at 2:30 PM

Good response, Sister! Our Moral Theology teacher is asked, every year, by our venerable high school seniors, how far they can go on a date. Every year, the boys are told that they should not be any more affectionate with their g/f than they are with their grandmother. Likewise, the girls are told that they should not give any more affection to their b/f than they do to their grandfather.

One year, I was observing one of the classes when the question came up. The reaction of some of the students was such a dead give-away! (As if kids can really hide much from us...) We usually know who is "dating" whom, and regulary counsel and/or discipline those couples who have managed to find every single unsupervised nook and cranny where they can enjoy 90 seconds of passion between classes. It was the very same students who could not refrain from facial contortion, involuntary gasps, and the audible "EWW!!!"
-CST

Sister, do you ever actually eat peas, or are they always used as instruments of torture? I had no idea they had so many uses before reading your blog.

Didn't St. Thomas Aquinas say that fasting is the guardian of chastity? At any rate, I find that fasting and prayer are helpful for me for discerning and staying within the limits of chastity. And don't forget that God wants you to be chaste. He'll help you if you ask him to. ;)

I think we should also be clear about a few terms.

Chastity/being chaste = "Chastity means the successful integration of sexuality within the person and thus the inner unity of man in his bodily and spiritual being. Sexuality, in which man’s belonging to the bodily and biological world is expressed, becomes personal and truly human when it is integrated into the relationship of one person to another, in the complete and lifelong mutual gift of a man and a woman. The virtue of chastity therefore involves the integrity of the person and the integrality of the gift." (Catechism of the Catholic Church #2337)

Chastity, therefore, is for all persons, single, married, or religious/priests. It looks different for the married person and single person, but all people are called to chastity in their state in life. Chastity is using one's body to love rightly, whether as a single or married person.

Abstinence, or continence, is refraining from sexual activity. It is appropriate for those who are single or in the consecrated life.

As a fellow single person, I would recommend Seraphic's blog, as she writes about this sometimes, with great wit and, when necessary, stern thinking.

Hello Sister,i have seen a couple of transfiguration pictures of our Lord and it has some people or crowd at the bottom,i'm guessing they are from purgatory or somewhere because they look sad. What is the significance of them?