Hello sister..I wondering if there are any congregation to become a nun that accept someone above the age of 30.

I bet there are a lot. Have you called around?

You mean some religious orders don't accept people over 30? What's the reasoning behind that?

The reason was that we used to be an army. We needed young strong people who would dedicate themselves to a life in Christ, to get into stage coaches and row boats and open schools and hospitals all over the world. We needed young women to take care of the army of old women who had given their lives that way.  It was a hard life behind convent walls even in the days before nuns hit the bricks outside of them.

Yes, we preferred virgins. Everyone was marrying Christ, after all.  But some women still got in after a life of husband and family. St. Rita springs to mind. They didn't want her, but she was persistent. She's not an isolated case by any means. 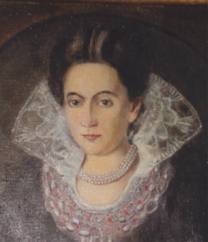 But there is no doubt that it was harder for a previously married older woman to get into a convent. Ask St. Rita. Even after the angels flew her over the convent wall the other nuns put her to the test. They were as relentless as Rita had been in her bid to get in.

Enter St. Jane Frances de Chantel, a pal of our patron saint of the stressed out, St. Francis de Sales. I feel bad that I didn't get to this a question a couple of days ago when it was actually her feast day (August 18th). I am nothing if not consistent. I always miss telling everyone about saints on the pertinent day. Ask St. Agnes.

Jane was a wealthy girl. She was pretty and vivacious and married a baron when she was 21 years old. She had a very happy life with her husband. They had 6 children, although only 3 of them lived. Jane busied herself with her husband, family, a lot of charity work and daily Mass at the castle. 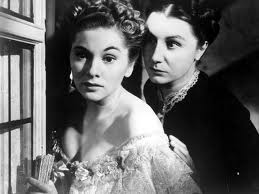 But after seven years of marriage, her husband died and Jane was inconsolable. She sank into a deep depression, curled up in a ball at the castle. Her father in law threatened to take her children if she didn't snap out of it and come and live with him. So she did. Unfortunately, he had a nasty disposition and his housekeeper was like that women in "Rebecca" who hates Joan Fontaine for no reason other than the fact that she isn't Rebecca.  Jane was nice to them anyhow.

A few years later she met St. Francis de Sales, who convinced her to relax a little. You can relax a little and still be holy.  Jane, meanwhile, decided that she'd like to become a nun. I'm not sure that Francis de Sales didn't simply skip mentioning to her that that would be very hard to do for a 32 year old widow and mother of three. He did tell her to skip trying to become a nun, which she did.

"Wait!", you're saying through the internets, "I know for a fact that St. Jane Frances de Chantel was a nun!" 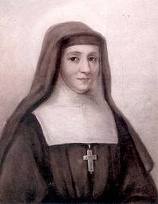 Yes, indeedy.  Three years later, cagey old relaxed St. Francis de Sales told Jane about an idea he had to start an order of nuns just for older women to join. He wanted to open a place where age or health or other considerations would be swept aside.  These women would not stay behind the convent walls, but be free to roam the community doing spiritual and corporal works of mercy.

They called themselves the Visitation nuns. St. Francis thought that the way Mary behave during the Visitation (where the angel Gabriel told Mary what direction her life was about to take if she agreed).  Meek and humble and ready to serve.  A good motto.

So isn't that lovely? They started an order to serve the community and everyone lived happily every after.

Not so much.  Women running around the community, een if they were nuns, was not acceptable. The women wound up being cloistered after all. (Nuns serving outside the convent walls is much more modern that you think. St. Vincent de Paul was finally able to break that barrier.)  There were only three women in the first convent. The community was under attack because of their desire to not be cloistered.

Then St. Francis de Sales died. Jane's son died. A plague ravaged France. Her son in law and daughter in law died.  And Jane went through depression, and spiritual bleakness and illness.

Being a saint is not for light weights.

The Visitation nuns, however, are still with us! The perfect place for you to begin your search. I applaud you. We are not an army any more.

Yes, we are.  But we are a much smaller army. See your local recruiter today!
Posted by Sister Mary Martha at 12:39 PM

"Catholic Answers" website has a post on this topic. As with most things on the web you'll have to be cautious & verify their "kosherness" yourself:

I don't see a place where I can email you, so here is my question...

A year ago we got a new priest at our parish. Over the year he has done numerous things to cause restentment in some of our congregation. I won't go into details, but I walked out of mass crying after his last "homily" wondering what he was doing being a Catholic priest.

I wrote our Archbishop about some of the things he said and hoped that it would bring to light the need our area has for a conservative priest. I have never done anything like that before. I mean, we don't need a Latin priest, we at least need a priest who isn't so wishy washy on Catholic teaching. One that will uphold the faith, not denounce it from the pulpit.

The churches in our area are fairly liberal as well. Lots of hand holding and drums. So what is a Catholic to do in this situation? It makes me ache that I can either go to a mass that feels more like a '60's sit-in or go to a mass where the priest says he can't defend or teach Catholic teaching.

I have children who need their sacraments and I feel as though there is no hope.

Anonymous - try a google search and see if there is an Ordinariate parish in your area.
http://en.wikipedia.org/wiki/Personal_Ordinariate_of_the_Chair_of_Saint_Peter