Good for the Soul 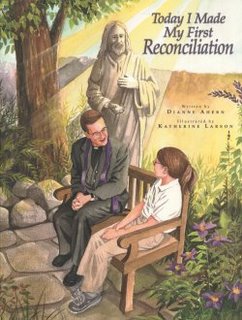 Being felled by my broken toe has given me the chance to catch up on all kinds of things. Most of those things are really tedious, like tatting* altar clothes. Not that I do that. I mean it's that kind of tedious.

But I have been able to catch up on my email and correspondence and it seems I've been neglectful in answering many questions sent to me by readers. So I'll try to pick them off one by one, or several at a time if they're easy. I can't play favorites and they are in no particular order. Since today is a day of national mourning and we are reminded of how easy it is to disappear from the planet with little or no notice I thought we could start with this question from Beadoodles in Illinois who asks:

"I wonder what your thoughts of the role of the priest in confession is. Isn't it just easier to tell the Big Guy yourself? Or is it that Catholics feel they can't atone unless someone told them to? And is it right for Father to make comments on sins? Like reprimanding the sinner? "

There are 2 types of sins. Lesser sins, like taking all your co-workers paper clips and rubber bands while she's out sick, are called venial sins. Big sins, like sleeping with your co-worker's husband while she's out sick, are called mortal sin. Mortal, because they wound your soul mortally. Adios, soul. Catholics know they have to atone. No one has to tell them. It has been drummed into them, for their own good starting at age seven, the age of reason.

But all sins, no matter how grievous, can be forgiven, and in fact ARE forgiven if the sinner is truly sorry. And that means not just grudgingly SAYING you're sorry, but actually feeling remorse.

You CAN just 'tell the 'Big Guy' and I'm sure He'll hear you. But get this, here on earth 'the Big Guy' is represented by the priest. Why? Because Jesus said so. He said to his Apostles, 'whose sins you shall forgive, they are forgiven them.' Jesus spoke in archaic language. God does, too. He said things like, "Take off they shoes from off they feet." Like Father, like Son.

So, Beadoodles, you can't fight city hall, as they say. We go to the priest because Jesus wanted it that way. You can pretend He didn't, but you'd be wrong.

So it follows that Father can make comments on sins, to give you guidance, just the way Jesus would. And he's not really commenting on you, so much. But what can I say, if the shoe fits.....

You'll want to make sure you get this confession thing together because if you die with a mortal sin on your soul, it's straight to hell for you. Do not pass go, do not collect $200. Don't be committing a mortal sin and then go cross a busy street against the light. Or go swimming with manta rays. (Rest his soul.)

You might also consider wearing a scapular. Mary promised that anyone wearing the scapular would not see the fires of hell. But she was talking about the brown scapular of the Carmelites (that big piece of cloth worn by the clergy that looks like a table runner with a head hole...mine is black). The Pope was so enamored of this idea that he extended the priveledge to all the faithful. So if YOU wear the scapular YOU will not see the fires of hell. You will go to Purgatory if need be. But you will get out of Purgatory on the first Saturday after your death. So you might want to shoot for a Friday passing. Also St. Lawrence comes once a month to collect one soul. I'm not sure how you go about gettin picked for that. And some other saint takes ten souls or so once a month, too. Find that line, if you're there.

I hope this answers your question.

*It has been brought to my attention that this word in common usage no longer refers to intricate crochet made with a teeny tiny hook to make intricate lace. I have not opened a tattoo parlor for altar cloths.
Posted by Sister Mary Martha at 9:22 PM

One caveat to your fine post. We of course can go to the "Big Guy" first and are in fact fully forgiven if we have perfect contrition. Though even then we are still called to go to sacremental confession since that is how God has set up his Church. Plus you can easily imagine how easily we can fool ourselves into thinking that we have perfect contrition and that our repentance is only because we have offended God and not because of fear of punishment due to sin.

Sister, you wrote this:
"But all sins, no matter how grievous, can be forgiven, and in fact ARE forgiven if the sinner is truly sorry. And that means not just grudgingly SAYING you're sorry, but actually feeling remorse."

This is not quite accurate. First, the Catholic Church does not say that we need to have "remorse," but rather "contrition." Second, it is not necessary for "feelings" to be involved (in the sense of emotions) -- though if a penitent has been granted the grace of the "gift of tears," it is a great one that helps him more deeply to realize how we have helped nail Jesus to the cross.

What is actually required of a penitent, at a minimum, is acts of the mind and will (even if he doesn't feel like crying at all).

We must recognize/admit to ourselves and to God that we have done wrong, realize that we have injured Him, express the fact that we are sorry for having done this, and firmly state that we will make an effort to avoid the same sin(s). These things are acceptably done, by some people who are of a more cerebral personality, without "feeling remorse."

God be with you, Sister. You are a wonderful writer, very insightful, humorous, etc..

I have a book on the Purgatory explained by the lives and legends of the Saints were some people have gone into Purgatory eventhough they committed a mortal sin (due to particular circumstances of their lives at the moment of judgement). I agree though with the previous posters on contrition.

I think that when we think of penance we should also remember what Jesus said to the adulteress: Go and sin no more. So, wouldn't it follow that after confession there is the resolution to make a 180 degree change in your life in regards to that particular sin (of course, all of this possible through God's grace)

What is the "gift of tears" though?