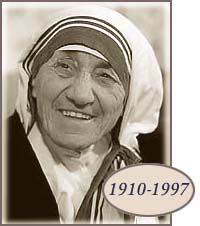 I was in a good mood.

The operative word is WAS.

Today is the brand new feast day of Blessed (one miracle 'til sainthood) Mother Teresa. I was going to spend the day reflecting on the thing that caused me to notice her in the first place, besides the fact that she's a nun, or that she founded her own convent with the personal blessing of the Pope himself, or that she hung around in squalor for love of her fellow humans, oh, and that Nobel Peace Prize.

But instead, I find myself stewing about this nasty article by that nasty man, Christopher Hitchens. It's an old article and I've read it before. For one thing, the whole situation is causing me to sin, since I am dwelling on Hitchens himself and how his giant puffy head reminds me of every alcoholic I've ever known. How many is that? Catholics get to drink. You do the math.

And he works for Vanity Fair. Vanity....that's a sin right there.

Off to confession for me!

Here's the nasty article. Hold your nose. Prepare to cringe and twitch.

Here's my response in defense of the Blessed Mother Terese . I'll try to keep it short:

In order to be a saint you have to have what we call heroic virtue. Virtue above and beyond the call of duty.

We know Mother Terese is going to be a saint because she had two things Catholics value very highly: 1. she had heroic virtue. 2. She was great at fundraising.

Someone needs to patiently explain to Mr. Hitchsons that if Mother Teresa would have given speeches about the need for birth control in over populated impoverished third world countries, she wouldn't be considered for sainthood in the first place, even if she was able to single handedly close down the communist country of Cuba by clicking the heels of her nun shoes together. You can't be a saint if you say things that are against the dogma of the church. You can't even be the Virgin Mary.

One of the ways the church determines if a Mary sighting is authentic is, "did she say anything that is contradictory to church dogma?" If she stood on top of a grotto and announced, "I am NOT the Immaculate Conception, where did anyone ever cook up that idea?", we're not even going to come and talk to you. And we came to the General Mills parking lot when Mary was on a tree there ....just to have a look.

I feel better, except for the mean things I've said about Christopher Hitchsons, for which I shall be punished severely...for this is another thing Mr. H should know: the people who get punished the worst in Purgatory are the clergy, because they were in a position of authority, they advised people on the state of their souls. There's no room for error...although...no one's perfect. (Next up the rung: parents, for the same reasons.) So Mother Teresa got whatever was coming to her and then some, for the vengence minded.

I meant to tell you the thing that drew me to Mother Teresa. It's that she had a version of this poem on her bedroom wall. Really, just this is why I love her. If she even tried to live this way, she's dead+in heaven=saint.


People are illogical, unreasonable, and self-centered.
Love them anyway.

If you do good, people will accuse you of selfish ulterior motives.
Do good anyway.

If you are successful, you will win false friends and true enemies.
Succeed anyway.

The good you do today will be forgotten tomorrow.
Do good anyway.

Honesty and frankness make you vulnerable.
Be honest and frank anyway.

What you spend years building may be destroyed overnight.
Build anyway.

People really need help but may attack you if you do help them.
Help people anyway.

I've always had a hard time believing little Mother Teresa said these things; apparently, I wasn't alone in that -- others asked Sr. Nirmala, or maybe I did, I don't recall, and the verdict is still out. As for Christopher Hitchens, let's pray for him. Let's put him under the care of the new saint herself.
;-)

It appears to me that while the articles occasionally made complaints about areas in which Mother might not have been practicing good medicine, the bulk of the complaints come down to a handful of standards every time: She opposed abortion, contraception and population control (big deal! so did Gandhi!)and made the splendid cosmopolitan city of Calcutta look bad. (boo-hoo!) Kind of highlights what these folks' agenda was, and renders questionable other allegations.

I would sugeest that the bulk of the complaints are these:

---Teresa believed that misery brought us closer to Jesus, and was therefore, beautiful.
---She accepted money from known criminals and despots. There is no evidence that she used that money to actually alieve suffering.
---Her hospices were really nothing more than places for sick people to suffer and die.
---She ignored modern medicine practices for others, yet used them herself.
---She is reported to have performed baptisms on nonbeleivers against their will.

I'd also suggest doing some research on Ghandi before using him as a tentpole. The actual man may not live up to the myth. Among other moral ambiguities, he, like Teresa, forbade modern medical treatment for those around him, yet checked into the world's best clinics when he, himself, became ill.

alright for you, Christopher. I hope your house isn't made of glass. You can go home to it whenever you are finally done standing in the corner.
sister mary martha

If my house were made of glass, I suspect it would still be standing. As usual, I haven't thrown any stones. I've merely reported on the stones that have been thrown by Hitchens.

From the other camp, the Orthodox Christians, comes even more doubts about Mother Teresa's chance at sainthood. It seems that Teresa. and her protege Sister Nirmala, have both been quoted suggesting that Christianity is not the one true faith.

“Some call Him Ishwar, some call Him Allah, some simply God, but we have to acknowledge that it is He who made us for greater things: to love and be loved. What matters is that we love. We cannot love without prayer, and so whatever religion we are, we must pray together.” -Mother Teresa

"Shiva became my favourite when I learned that he was not loved very much because of his very ugly appearance." -Sister Nirmala

“You say a prayer in your religion, and I will say a prayer as I know it. Together we will say this prayer and it will be something beautiful for God.” -Mother Teresa

"I cherish within me the most beautiful values of Hinduism. I come from that religion, from that culture. My roots are there and I cannot, I must not, forget them. I believe that there is partial truth in the other religions, and therefore also in Hinduism." -Sister Nirmala

And appreciating the beauty and truth in other faiths is a bad thing?! Get some consistency, Christopher!
Gandhi advocated birth control through self-control, and practiced self-control himself (look it up.) And while we're on the subject of -trols, I think I smell one.

Toodles, Chris--come back with evidence instead of insinuation. Mother's been scrutinized nine ways to Sunday; Hitchens had his day in the Vatican, and I think you know it!

To answer your question, yes, appreciating other faiths is a bad thing (if you are a follower of Orthodox Catholicism.)

The church leaders who will inevitably decide whether Teresa should become sainted, by definition, must be Orthodox. Even the slightest hint that Tesesa implied that the Catholic Church is not the one and only true Church should have automatically disqualified her from official beatification. This is the rule.

There is unfortunately no evidence that can be given to definitively prove the thoughts and motivations of another human being. All we can do is look at quotes and facts (which I have provided) and come to our own conclusions. In fact, though I may have occasionally slipped, I have been pretty careful about revealing my own actual thoughts on the subject.

On to Gandhi.
If you consider the practice of self-control to include, not only sleeping with multiple nude, young girls, but also giving and receiving daily enemas and massages to and from them, then yes, Gandhi practiced self control. While there is no proof that he was actually having sexual intercourse with these teenagers (some younger than 15,) it can certainly be assumed that he was obtaining some sort of gratification from the experience. I'll advise you to take your own suggestion and "look it up."

Fine--I'll concede you the Gandhi point, though it took me some digging to get anything that even resembled what you were describing (and that didn'include the enemas.) I still find your actions pretty trollish, though--this is, after all, a lighthearted blog--and I'm inclined to think you're not concealing your personal views as well as you think.

I also think you have Orthodox Catholicism confused with Fundamentalist Catholicism, but that's just me. Maybe Sister can shed some light on this matter--I'm off to check the catechism!

Okay, re the matter of other beliefs according to Orthodox Catholicism:
Grab a copy of the Catechism. (I'm using the 1994 ed. imprimatur then-cardinal Ratziger, in case some numbers have changed.)
Read nos. 836-848, which includes the headers:
Who belongs to the Catholic Church?
The Church and non-Christians
'Outside the Church There is No Salvation.'

Then if you want to argue orthodoxy, take it up with His Holiness.

It may not be the most charitable thought in the world, but whenever I come across Mr. Hitchens' remarks regarding Blessed Mother Theresa, I invariably find myself whispering a one sentence prayer on his behalf:

For some reason, that seems to help. God bless, and thanks for providing such a great blog.

Hi, I've been thinking about this all night and saw this website today. I have always loved Mother Teresa, even before I became Catholic, and am really disturbed by these allegations.
Everyone seems tp be side stepping the issues, where does all of the money go and are dangerous things going on in the name of poverty like reusing dirty needles and the like? I have read Hitchens book and am still int he church, but I have to say it raised some serious doubts in my mind. Any other thoughts on this?

The Church is founded, built and sustained on trust. Since none of you, presumably, actually met Mother Terese (let alone, following her around and reading her thoughts) you have two options: 1) Believe Hitchens et al and the general diatribe 2) Believe the Catholic Church's view of her. Your choice will certainly have ramifications for you life and your eternal destination. Kindest Regards. Sum Romanus