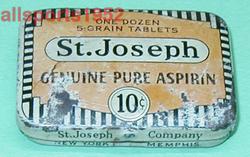 How long do you hold a grudge? I know we're not supposed to hold a grudge at all, but some grudges are important to hang onto. Isn't that what a boycott is all about?

Here's what happened. Sister Mary Fiacre takes an aspirin every day to help guard against heart attacks and strokes. So far, it's working. Whatever health related train wreck she has endured, she hasn't had a heart attack or a stroke. We don't think. I have been militant in making sure she gets St. Joseph's aspirin. In the first place, it's St. Joseph, the patron saint of everything: travel, a happy death, old age, families, dads, workers, aches and fever reduction, Italy...the list goes on. And secondly, because I have been boycotting the Bayer aspirin companyfor years since a Jewish friend of mine told me to.

I'm generally not so wishy washy that I would just boycott a whole company by taking someone's word for it. I don't boycott a book without reading it first.

But she was so vehement, I just went with it. I knew it had something to do with the Second World War. Chances are, contrary to what the President of Iran believes, she wasn't making anything up. AndI can always take St. Joseph aspirin, where my loyalty lies.

Since I broke my toe and couldn't do things I normally do for us here, I have been relying on the church ladies and other kind souls to hunt and gather and fetch. We ran out of aspirin and Mrs. Morris brought us some. Bayer. oops. I can't just toss them out. Mrs. Morris paid good money for them. So I have been giving Sister Mary Fiacre Bayer aspirin all week, feeling just a little guilty.

One of my normal duties is digging up patron saints for people. I have so often mentioned that there really is a patron saint for everything...beer, disappointing children, toothaches....that people ask me all the time what saint to turn to in their time of need.

One of the church ladies was concerned about her drunken nephew and what would happen to him if he ever stopped drinking and we were talking about the DT's. I figured, given the fact that there is a patron saint for beer, there must be one for the DT's.

What do I unearth? St. Barbara.

The man who invented barbituates is none other than Adolph Bayer (also spelled Baeyer). He named his new wonder drug by putting together the name of the saint's feast day on which he made his discovery, the feast of St. Barbara. He called his new compound Barbara's urates (urates=a salt of sulphuric acid).

Not so bad really. Sleeping pills, badly needed for people who were getting no rest because of diseases like TB.

The Bayer company also invented two other wonder drugs, aspirin and heroin, in the same two week period. Heroin was the more promising drug, for the same need, to help people with severe breathing problems get some sleep, a huge problem of that time. The only had morphine, which is habit forming.

Bayer was also the first company to do heavy duty testing on animals and humans. The researchers all tried heroin and said it made them feel 'heroic' which is how it got it's name. The head of the company became a regular user. Heroine was selling by tons for 3 years or so when doctors started reported it's addictive nature. oops.

Seems the company thought heroine would be the most lucrative, so they pushed that. Pardon the pun. No one dreamed the big money would be in aspirin.

The company was still testing on animals and humans during WWII when they also bought Jewish slave labor from the Nazi's and haggled that $80 was too much to spend on a person. And even if we could leave them off the hook for all of that, they also fought restitution just yesterday....yesterday in the grand scheme of things.

Now I feel really, really guilty giving Sister Mary Fiacre the Bayer aspirin. I can barely look at the bottle. I'll have to limp to the Walgreen's myself for the St. Joseph's and offer it up for all the pain and suffering caused by the Bayer aspirin company.

I always thought the company was named Bayer because it was located in Bavaria, which is Bayern in German. But I suppose Herr Bayer was from Bayern.

I'm just glad things are working out for the good sister. Always thought Bayer was just someone who lived on the bay. Who knew?

We had come in from lunch and were studying some explorer (as every Grade 5 and 6 class did every day in Ontario) when the Principal, an old Scottish woman, came over the PA and said:

OK...I made up the part about the oat cake.

i still boycott products tested on animals as well. why torture them?they dont have the same physiology as we do. did you know that tylenol can kill cats, or that walnuts are poisonous to goats? heck, just about everything causes cancer in white rats! besides, who ever heard of a rabbit wearing lipstick!

Many household products and cosmetics companies still pump their products into animals' stomachs, rub them onto their skin, squirt them into their eyes, or force animals to inhale them as aerosol sprays. Charities such as the March of Dimes use donations from private citizens to fund experiments on animals, and the FDA requires all drugs to be tested on animals. However, animals differ from humans significantly, making animal drug tests unreliable and dangerous. New research methods, such as computer models, cell cultures, and human studies are more accurate, less expensive, and much more humane.


for more info on animal testing please go to http://www.stopanimaltests.com/feat/gta/index2.html

This was a poignant meditation on a subject I think about often (not aspirin). We live in a world in which it is hard not to be complicit in evil; or, at least, to not benefit from it in some way.

I think about the shirt I am wearing--made in China. By whom? Covict labor? Child labor? I sometimes cannot bear to think about it.

As for aspirin-- a true wonder drug. Does it really mitigate the horrors committed by the company that discovered it, that we can buy it under different brand names? Yet I completely understand why you would go out for a differnt brand. It is about as close to a real protest as you can make.

My dear Sister Mary, this is my first visit to your blog. I lovingly suggest that you tripple up on your filters.

Love and Peace. Mr. & Ms. you know who before they brain washed you. BBC

One of the great things about living in "the free world" is the ability to boycott anyone that you want to, even when they don't really deserve it.

For instance, there are many people boycotting Target for many different reasons. The heathens hate Target for allowing a single pharmacist to refuse to sell the Plan B "morning after pill." The other side hates Target for not allowing the Salvation Army to ring its bell throughout the month of December. The straight-up wackos hate Target for being owned by the French and therefore supporting terrorism.

This is great reading, Sister. I found my way here from a comment you made on a blog of a friend of mine, Bluegirrrl.

By the way, My name is Joseph and I will celebrate 35 years with wife, Barbara on October 9th. Very appropo that I visit your blog when you write about us! Cool.

Also, since I have had two bypass surgeries, I can tell you that the aspirin I took every day didn't keep me from having the second heart attack 17 years later. Maybe I should have taken Saint Joseph brand instead of the generic cheapo stuff I get from the VA.

I'll be back. Thanks for the info.

Target is not french-owned. I believe this issue has been settled at Snopes, www.snopes.com

If I can quote myself

"...even when they don't really deserve it."