The Three Scares and Four Sorrows of Mary 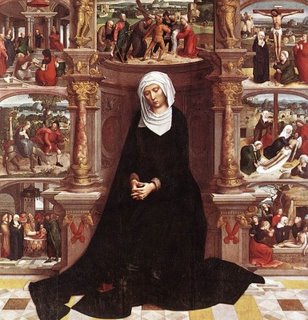 The doctor told me that by today, a week from the bathroom door incident, my toe bone should have knitted together some. I think it has. I still can't wear a normal shoe.

But if that's my worst complaint, no big deal.

Especially since tomorrow is the feast of the Seven Sorrows of Mary.

Now let's not confuse ourselves. The Seven Sorrows of Mary are not the Five Sorrowful Mysteries.

For the separated brethen and the miminally educated CCD kids, the Five Sorrowful Mysteries are five incidents in the life of Mary that we meditate about when saying the rosary on Tuesday, and Saturday, unless it's Lent, and then we do the Sorrowful Mysteries every day. If you get confused, you could just say a proper rosary and go around the beads four times, once for each set of mysteries, which is what a full rosary actually entails. But we know how lazy you are so we divided it up for you across the week. Pathetic.

Bear with me here. The rosary is a meditation on Jesus as seen through the eyes of his mother. Mary doesn't actually appear by name in the Sorrowful Mysteries. She's all over the Joyful Mysteries and she is active in half of the Glorious Mysteries and makes appearances in the Luminous Mysteries. I know it sounds a little confusing, but if you actually mediatate on it, you'll figure it out.

Anyhow, the Five Sorrowful Mysteries are: The Agony in the Garden, The Scouring at the Pillar, The Crowning of Thorns, Carrying the Cross, and the Death on the Cross.

The Seven Sorrows of Mary

1. The Prophecy of Simeon.
Mary brings the baby Jesus to the temple and Simeon jumps out and tells her that she will have a sword pierce her heart.

Now this one isn't all that sorrowful, really, if you imagine yourself in her shoes. If you were at the temple with your beautiful new baby and some old man jumped over to tell you things would end badly and that you would be incredibly sorrowful and wounded, you might be really spooked or a little peeved. What a wet blanket.

If you knew he was a prophet, it would certainly gnaw at you.

This is when evil king Herod got wind from the Magi that a new king had been born and had all the first born babies killed. I have to pause for a moment and say, what's up with these Magi? How 'wise' was it to tell the old evil king they were on their way to honor the 'new king'? And ask where they might find this new king? Doh! That has always gotten on my nerves. Wise, indeed.

Anyway, an angel tells Joseph to get out of Dodge. Which is why St. Joseph is a great choice to replace St. Christopher since Christopher was x-ed off the list. St. Joseph did a lot of safe traveling with his family.

And for Mary, very scarey.

3. Jesus is Lost at the Temple

The next three (Jesus carrying the cross... also a Sorrowful Mystery..., Mary at the foot of the cross and Mary recieves the body of Jesus) I won't go into because since I know you all saw the Passion of the Christ, you know how deeply sorrowful they are, in living color, great detail ten feet high, slow motion and surround sound.

The last one is Mary witnessing the Burial of Jesus. How right Simeon was.


So that's my day tomorrow. I suppose some of you are just looking forward to the season premiere of "Lost".
Posted by Sister Mary Martha at 12:00 PM

I suppose some of you are just looking forward to the season premiere of "Lost".

Oh so true. However, since it doesn't happen until Wednesday I think we're all good to join in on contemplating those seven sorrows of Mary. :-D

Ah, but September 14 is the Feast of the Holy Cross, is it not? No disrespect to the Blessed Mother, but I'd have to say the veneration of the Holy Cross carries more weight (I know it's a pun, but it also is not meant to be disrespectual). Age quod agis.

Julie, you should also contemplate the Seven Sorrows while you watch Lost and constrast and compare the trials of Walt.

Pawlie, I'm not sure a Catholic can avoid contemplating the Holy Cross for a second. It's around your neck, on the wall, in the car, at the end of your rosary.

What can I say. Nuns have a thing for Mary.

Wait, Lost is starting already?! Someone told me that it wouldn't start until October. I'd better look that up . . .

I had a comment related to the post, but I've completely forgotten it now. I'll try back later, if I remember.

Thanks from a former CCD kid--I never got half this stuff!

Sarada, go stand in the corner until Lost starts, whenever that is.

Sister, thank you for posting your supportive comment on my blog.
Well, I think you are right, Pope John Paul II did hold on to his job forever! Ha! I like that.

I haven't seen even one episode of Lost. I'm too busy with EWTN. (Does that get some Purgatory time lopped off?)

Sister, I love lurking and reading your blog. You make me laugh out loud. And there's not much opportunity to laugh in our demented, depraved, degenerate world. Pray for us.

Mr. or Miss Fapfs, I think watching EWTN a lot IS like being in Purgatory. No offense to the wonderful work they do but some of those folks are just as dry as dust.

and take heart, there has been no time in recorded history that the world has not been demented, depraved and degenerated. I will grant you only that there are more people on the planet now to BE depraved and demented.