A Brief History of Eternity 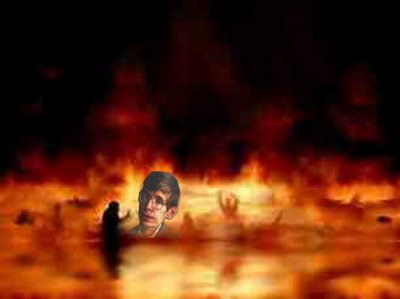 My goodness, we've had quite the feedback on Stephen Hawking's marital status. I can't really talk about it any further without resorting to gossip. Let's just say we don't care much for divorce in the Catholic church and leave it at that.

Or....at least let me explain that as far as we know (without a certficate of nullity), Mr. Hawking and his first wife are not apart, even though are divorced.

Prepare to be confused.

Here are the rules.

The church recognizes civil divorce and even the need for it. If a couple separates there are things like child support and property issues that have to be resolved.

But the church never recognizes the divorce as a thing that dissolves a marriage, even if the marriage is bubbling like an Alka Selzter tablet waiting to tackle a hangover.

A marriage is impossible to dissolve. You take your vows before God and the community. "What God has joined together"...you know the drill.

In order to not be married anymore you have to show that you were never really married in the first place. For that you need a certificate of nullity, commonly, but erroneously called "an annulment." To get one you have to show that somebody didn't live up to their promises, or that they entered the promise with their fingers crossed behind their backs. For example, you stupidly marry a person of another faith (a recipe for disaster, what were you thinking) who promises to raise the children Catholic, and then they don't. Since this person never even intended to get the kids up for Sunday Mass and help them figure out what to give up for Lent, but just said he did so you'd marry him. He ( or she...don't get your knickers in a bunch) entered the contract under false pretenses, thus the contract never took place: it is NULL.

The children aren't null. They probably have a lot of catch up work to do, though.

If you are divorced, but haven't had a certificate of nullity, you are not 'divorced'. That means if you re-marry you are living in sin. Tons of sin, really because everything you........do......as a married couple ........each..........is a sin. Or thinking about that with the intent to...have that happen..... whether it actually happens or not. It's a double sin, too. Because you are causing the other person to sin, that's a sin on you, too. Two mortal sins, every time.

Since you're still married, you're even in big trouble if you're dating.

If you're the dump-er we better not see you in the Communion line with that mortal sin on your soul.

If you're the dump-ee you are sin free. Unless you start dating. Then you're on the down escalator. You'll recognize it, it's the one that's on fire.

I don't know the status of our favorite physicist in the eyes of the church, but...it doesn't look good. You can see why it's difficult for me to focus on unified theory when I have to worry about his immortal soul.

At least he has a good understanding of the word 'eternity.'
Posted by Sister Mary Martha at 3:34 PM

Matthew 19:6 one of the Bible references for the insolubility of marriage. It's not just the Catholic church's bright idea.

Standing for the institution of marriage does more for the status of women (and children) than anything else in the world.

I am grateful the Catholic Church still decrees what God intended, and is not caving to the social mores of today.

And that when I'm 55 and not so young and cute anymore, he can't dump me for a newer younger model with no consequences.

Maybe you should have been a nun. Then you wouldn't have to worry about what consequences your spouse might get for throwing you over. Your spouse as a nun would never do that.

stephen hawking did WHAT?!

right. as a person who lives down the street from him, I am appalled. his wife supported him through all those years. they even got such a nice-looking lady to play her in his biopic.

ah well. maybe he knows a few wormholes he can use to get himself out of hell.

He, in the sense you used the word, means he or she.

Anyone who gets his (meaning "his or her") knickers in a knot, or uses he/she or the odious s/he just doesn't speaka de language.

That image of Steve Hawkings head bobbing up and down in hell on your blog just did me in. I laughed so hard I slapped myself, therefore sinning since I trivialised HELL in such a way.

BTW, I seem to agree with the RCC on divorce and remarriage. It scares me.

Too bad I refuse to convert. But I will continue to read your blog and be a Reformed Sola Scriptura Heretic. God bless you, Sister Nun lady. +