The Mark of the Long Dead Beast 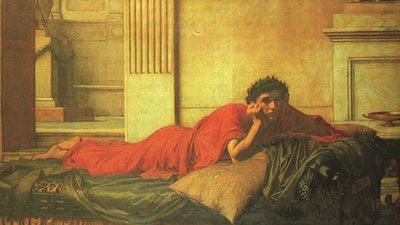 On the day before Halloween let's discuss a personal pet peeve of mine.


Boy, does the superstitious craziness around this number bug me. The "Mark of the Beast!" The return of Satan! Who could it be? Hitler? Ronald Reagan? Every other Pope? The Omen I, II, III and IV?

Scholars, historians and various and assundry Church elder types feel that 666 refers to the emperor Nero. I'm jumping on the bandwagon. Actually I've been on the band wagon for years.

Why just yesterday Mrs. Morris treated me to a coffee in a neighborhood coffee shop and the bill came to $6.66 (she had the curly fries). The girl behind the counter got all googly-eyed and actually changed the bill to $6.65! As though if we paid $6.66 the devil would come to get her.

I suppose he may anyhow, if we are to believe what we read on her tattoos.

It was everything I could do to stop myself from shouting, "It's NEROOOO!" But I didn't want to cause yet another scene. I did explain to her that she needn't worry, that 666 refers to Nero, so everyone can just let it go. I left a penny in the tip jar.

Mrs. Morris, by the way, the poor thing, blew my extra hour from the" fall back" time change right out of the water with her kind deed of taking me out. She forgot to set her clock back and showed up for our 8:30 AM coffee shop plan at 7:30 AM. I never told her. I didn't want her to feel foolish. The fact that my veil was way crooked should have tipped her off something was up. I've never met anyone who forgot to set their clock back...or forward..who didn't feel foolish after they show up an hour early for the party or almost miss the whole thing and realize what went wrong. Our Lord in Heaven, NEVER plan a surprise party on the day after a time change.

I'll admit that there are some who argue about 666 being Nero. Jehovah's Witnesses, for example. But the evidence stacks up.

I think the first thing I read about the matter explained that, like the ancient Roman language, there are no such things as numbers in the language in which Revelations is written. Think Roman numerals. Letters are used as numbers. Anyone reading Revelations back in the day would have read the word as 'Nero' and all of this Damien nonsense would never have occured.

I tried to fact check that, about the letters and numbers and came up blank. I'm sure I didn't dream it.

I did have a dream that I dropped my school papers in a puddle and when I went to try to grab them out they just kept getting further away and when I waded in after them I sunk like a rock into a black oblivion. Oh well. At least I was fully clothed.

If you look up Nero and 666, you'll at least see that I'm not making this up. Look on the Google. It's on the internets.

Also, it's extremely likely that the Book of Revelations was written during the reign of Nero. It was definitely not written before his reign. If it was written after his reign it would have only been about 30 years later.

Does Nero fit the bill? Yes. However it happened that Rome caught fire and whether or not he danced a jig during it (the fiddle was not yet invented), Nero did catch the blame from the rumors that he did both things and he needed a scapegoat. The Christians were chosen for their "hatred of Humanity."

Let me just stop right here and say that in the light of history, this lunatic idea that there is a 'war on Christmas' makes me even more berserk than this 666 stuff. A bunch of people out Christmas shopping wondering whether to say "Merry Christmas" or "Happy Holidays" to a perfect stranger can't hold a candle to being dragged off for your alleged hatred of humanity and made into a human tiki torch for an imperial dinner party. Now that's what I call a war!

Nero threw the Christians to the lions. But that was only step one. He also paraded them around in animal skins and let wild dogs tear them apart. It was all great fun for the Romans until the tiki torch episode, which no one much cared for. They thought it made Nero appear cruel.

So can we all just take a deep breath and let this go now? The Church Fathers had a big fight in the 4th century as to whether or not to include the Book of Revelations in the New Testament in the first place. Why? They thought people would get too confused.

Ya think?
Posted by Sister Mary Martha at 3:28 PM

The penny in the tip jar was a nice touch!

The number in our hymnal Missa de Angelis is 666. So 666 is all over the church every week, and the cantor says 6 hundred and sixty six LOL.

I figure if the Church isn't concerned about it, I won't either. I didn't know that stuff about Nero. I should look that up.

Revelation uses symbolic language. I was told that "7" represents a perfect number. So "6" is short of being perfect. And "666" is a ghastly order of imperfection, to symbolize the devil.

Again, it's just a symbol. If I understand correctly, Lucifer was made pretty darn near perfect. Probably his only imperfection is his pride, which got the better of him. And though I say "him," Lucifer is actually a spirit, hence no gender. Then while we're at it ... Lucifer is a chained dog and we need not fear him with God and His angels on our side. Though I admit the devil does wreak havoc, like beating St. Padre Pio and burning up St. Jean Vianney's room. On the lighter side, legend has it that the devil appeared as an ape to St. Dominic, who then made the ape hold his candle.

Roman numeral 666 is DCLXVI.
Looks like a word verification for a blog.

Just for kicks, when my Protestant friends ask about my scriptural basis for Catholicism, I point them to John 666:

John 6:66 (New International Version)
66From this time many of his disciples turned back and no longer followed him.

You know, how the Eucharist is so important Christ let His followers take off rather than change it.

My driver's license number has 666 in it. Of course, I had the parish priest bless my car, so that probably nullified whatever EVIL was lurking there.

dang it, peeps today think Nero is the dude from the Matrix! I love your history lesson.

The first time I saw The Matrix i thought Keannu's name was Neil instead of Neo. What a lame hacker name that would be.

Christopher said:
The first time I saw The Matrix i thought Keannu's name was Neil instead of Neo.

Heehee. That is a lame hacker name. Beware the sinister hacker, Neil!

You'll never be able to watch that movie the same way again.

I have a friend who returned a roasting chicken to the supermarket when she realized it weighed in at 6.66 lbs. I am not that ambitious. Or superstitious.

Beware, the sinister chicken of Satan! The cluck of the Beast! A creature most... dare I say it?... fowl!

My bad! Neo not Nero! Thx for the correction!

I will go off and say a Hail Mary now.