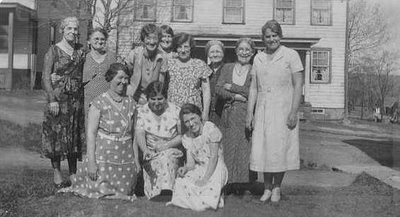 Sister St. Aloysius and I made a trek down to the Catholic Charities bins. We offered it up and took Sister Mary Fiacre with us. There are about nine ladies that work at the local Catholic Charities store (it's like the Salvation Army store, but closer to salvation) and they rotate their hours. They can't seem to stay away so all nine of them are almost always there. Three of them are in their nineties. None of them are under seventy. They always make quite a fuss about Sister Mary Fiacre. They feed her cake.

We went there because of my fiasco at the fabric store. I left empty handed for all of that. Poor Sister St. Aloysius didn't get anything she needed.

If ever there was a forgiving soul it would be Sister St. Aloysius. Everything is so difficult for her, she never faults anyone for their short comings. (Especially when they come up short at the fabric store during a weekend sale in October.) It made her a terrible teacher, though. Nothing got done. Teachers have to drag people through their shortcomings.

Anyhow we hit the Catholic Charities store thinking we could find things for costumes there, or at the very least she could find some things she could rip apart for parts, like zippers and buttons and fabric.

As soon as we walked in the door we were overwhelmed with a horrible stench. Sister Mary Fiacre, who rarely speaks, shouted, "What STINKS?" That's how bad it was.

I couldn't get my bearings. If I could have I would have remembered that the ladies have often told me that there is a poor man who shows up there from time to time and they never know what to do about him. They had told me that he stinks so badly that no one can breath while he's there or for hours afterwards and the whole store stinks for days. They don't know what to do about it. They want to ban him from the store somehow.

So there in the corner were Mrs. Morris and Mrs. Gott with this talking mound of grime. They looked stricken. The other ladies were cowering in the kitchen. The one lady that could still stand, Mrs. Andrews, was attempting to make a couple of sandwiches for the man, since that's why he came there.

I am ashamed to say that if I could have gotten away with it I would have spun around and high tailed it out of there, Sister Mary Fiacre and all. But when she screamed, "What STINKS?" The ladies spotted us. I saw the look of relief on their faces, as if here at last was the answer to their problem.

I'm really not the answer to their problem. They have told me about their problem before and I had no answer then. It's a charity. You are there to help people like this man, of all people. You don't want to hurt his feelings, but you can't let him hang around or even come very often because you can't help other people with that awful stench there. Mrs. Gott and Mrs. Morris, certainly the most capable of the bluntness needed here, have told him he can't hang around, so he has been more scarce. But he also hasn't taken care of his problem.

It begs the question, "What would Jesus do?" Jesus would, of course, embrace the man.

I knew I wouldn't be doing that.

What would Jesus do? Obviously we are dealing with mental illness here. So I think Jesus would have cured that right off. Then while the man was blithering in gratitude, Jesus would have gotten the women to wash this guy up. Not with anyone's hair this time. "Go now and stink no more."

It's also conceivable that since people didn't bathe so much back then the whole thing wouldn't have bothered anybody so much. Or maybe Jesus was just too polite and forgiving to worry about it. Maybe St. James the Greater and St. James the Lesser actually refers to the way those two smelled and not the order of their apostledom as everyone thinks.

The thing is, no matter which way you turn it I'm in over my head here. I can't cure him, there will be no hugging, and even if we all had hazmat suits we can't wash him. There's no shower here. And suppose we did? What happens after he goes home and sits on his couch and sleeps in his sheets? Since his smell is a direct result of his mental state, what kind of state might he be in if he's clean? He's docile right now, but after a little Irish Spring.....................

"Oh, Sister!," Mrs. Morris said. Mrs. Gott took the opportunity to high tail it out of there. I think she might have run right out the back door.

"Mrs. Andrews is making Bob some sandwiches," Mrs. Morris told us. That is shorthand for "any moment now, we'll get Bob out of here." As Bob lurched toward me Mrs. Morris signaled me, by looking to the sky and waving her hand under her nose, that she was about to faint. Mrs. Morris is 85. Mrs. Gott, the sprinter, is 75.

As Bob moved in my direction I wished everyone could have the experience I was having. That way there would never again be any argument of the divinity of Jesus, the embracer of guys like this one.

I was formulating some remarks. "Bob, " I would say in my kindest non-Margaret Hamilton voice, "the ladies have told me about you. They would be happy to help you get cleaned up and fix you up with some new clean clothes....." No, I can't say that....that would be a lie...the ladies would kill me if I volunteered them for that........happy!!!!???

Right then Mrs. Andrews came flying out of the kitchen. "Here you go, Bob!" she said in her nicest non-Bay Buchanan voice.

Just like that, Bob was gone. I hope that the door closed behind him before he heard Sister Mary Fiacre shout , "You STINK!" Although maybe it would have been helpful. "The truth shall set you free." Who said that?

We tried to help fumigate, but the ladies assured us it would take a day or for the cartoon stink lines to evaporate. That means we'll be back there again this week. We took some cake for Sister Mary Fiacre to go.

Another Guy With an Odor Problem
Posted by Sister Mary Martha at 4:53 PM

Next time let me know what you need. I have a fabric store 4 blocks from my house, and my husband works in LA and could deliver it. Would that make life easier?

Hello siter, I thought I had left you a comment a few days ago but I dont think it went through. I was wondering about converting to catholicism. What is standard procedure?

Emily, now that you're sober enough to type, you have to go to a parish and talk to the priest there. They'll hook you up with adult Catholic education.

I enjoyed your story, and you were right - you cannot heal Bob - but through your prayers - God can.

May God bless you indeed.

An Angel Visits You

I had to tell you: I followed Vir Speluncae Catholicus The Great's link to you. I'm glad I did.

You're now in my "Catholic Links" favorites folder - #3 in line!

Keep up the good writing.

Sister Mary Martin, I hope this finds you well. I saw a comment from you at Kilroy's blog. I was curious how you determined the blog's Patron Saint. I operate a blog that provides an opportunity for women to write erotica; it offers them a creative challenge to collaborate with other writers instead of writing on their own. From reading your blog, you seem open-minded, insightful and forthcoming. Do you have any words of wisdom to offer? O would, of course, be interested in our Patron Saint. Be well; the happiest of holidays to you.

Mistress Regina said...
This comment has been removed by a blog administrator.
8:28 PM

Miss Regina, what you offer isn't an opportunity to write. It's an opportunity on the rocket to hell. Of course I have a Patron Saint for you, the official saint for temptation, St. Rose of Lima.

But you'll need more than that from the sound of things. I also recommend Mary Magdelene and St. Dominic Savio. Dominic used to snatch filth out of the hands of his classmates. I sure he was a very popular boy.