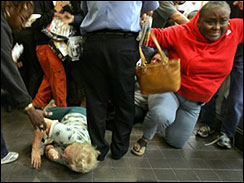 Where have I been? When last we met I mentioned that Sister St. Aloysius has been swamped with sewing, what with Halloween approaching. I also explained that she refuses to go to the fabric store during the month of October. These two things are not compatible.

My toe is better so I sprang into action.

No I didn't. I'm really too old for that. It's also really difficult to spring in any direction in a habit. The whole veil can get caught on a door knob.

I did see it as a hugh opportunity. First of all, the hum of the sewing machine really seems to soothe Sister Mary Fiacre into a doze, so it's much easier for me to get out and about. Secondly, I love a bargain. (I have to....) The fabric store is having a half off event over the weekend.

And third! If the fabric store is as horrific as Sister St. Aloysius seems to thing it is, imagine the penance opportunity to go in there, not knowing beans about sewing, on a weekend in October with Halloween closing in and a huge half off sale!

I believe Dorothy Parker had the right idea when she said, "What fresh hell is this?" The phrase came to mind in the first hour which only involved the parking lot. I'm excited at the prospect of someday shaking hands with all the souls who were released from Purgatory while I offered up my suffering driving in circles in the tiny parking lot, while someone who just got there managed to get ahead of me and zip into a space over and over again. It's not all that easy to drive in a habit, either.

Can I just ask of all the people who wish all clergy and nuns would always wear a habit or the collar so you know right away they are clergy...... is that so that you know to treat us nicely? Because it doesn't work, anyhow. And shame on you anyway for wanting a heads up so you can treat the clergy in a better way than you treat everyone else.

Also, I now know what happened to all those people who think they were sucked up by a UFO and are missing time. They went into a fabric store on a weekend in October during a half off sale. They just don't remember. They have blotted it from their minds.

Once inside, things went smoothly for a while. One woman was amazed at what a fabulous costume I had made for myself and asked which pattern I had used. Was her face red....
What on earth would make her think I had made myself this whole habit in the middle of October and then run out to the fabric store in it? Not the brightest bulb. I didn't want to make her feel bad for asking such a stupid question and I felt bad for judging her question as stupid so I asked her advice about how to look through the patterns. God gave me the opportunity right away to do penance for all of it by allowing me to spend the next hour with her.

It all went downhill from there. Eventually, I had to be asked to leave the store by the manager. It seems my involvement in the salvation of souls by warning mothers about what not to wear was not appreciated.........more on that tomorrow.....................
Posted by Sister Mary Martha at 10:21 AM

It is hard, is it not? I was in a public building once where I saw a heavily pregnant woman get up from a chair to show her thong (with jewels, so it was done on purpose) popping up from her low jeans.
My husband, who should not have been looking and now needs to go to confession, leaned over and said to me that it was too late to be dressing like that now... she was already pregnant.
But I kept my yapper closed. I will leave the saving of souls to you, dear Sister.

that reminds me, i need to go to the fabric store so i can make my nun costume before sundays roller derby bout!

ps, i think my prayers are working with this new pope medel, not a single person has been fired since he arrived (whew!)

For an encore, are you going to Victoria's Secret or Fredrick's of Hollywood right before Valentine's Day? You could talk about Natural Family Planning and the joy of sex within marriage.

"Can I just ask of all the people who wish all clergy would always wear a habit or the collar so you know right away they are clergy......"

I can't speak for my fellow Catholics, but for me the reason is actually much more selfish, and that is that it makes me so happy to see members of the clergy. Whenever I see a nun walking around campus (I think they attend classes here or something), I always think, "Ohmygoodness it's a nun! How cool!" If she catches me staring, I always end up giving a sort of bashful little smile and wave. She probably then figures I'm one of those 'special needs' people or something. She's probably right. Same thing for priests. I always smile at priests.

And if I do treat members of the clergy more nicely than I treat others, then our Lord at least gives me the opportunity for penance when he sends the most unbelievable dunces into my workplace. I have no choice but to be nice to them!

It is a crying shame that people these days don't know what to do when they see clergy drapped in the appropriate fashion.

It probably has something to do with the fact that men never pay for any dates anymore, always wanting to go dutch.