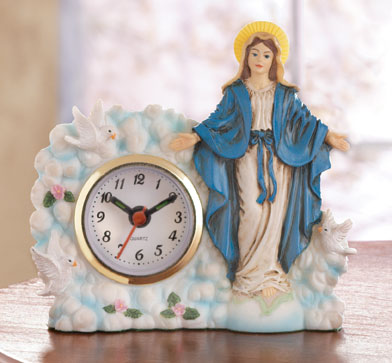 I know most people love the 'fall back' thing, gaining an hour in the middle of the night. I certainly did as a child. Some of you have noticed I'm a bit of a night owl. I always have been. I was asleep at my desk as a child. Being awake in the morning is a perpetual penance for me. Hooray!

So what else is new. Is the Pope Catholic?

Every year I think I'll come up with a great plan and every year I just spend the hour saying the rosary. Not that that is so horrible. Our Lady told us the only thing standing between all our recent sins and the wrath of Jesus is saying the rosary. 'Recent' being since at least the turn of the century...not this one..the last one. If He was mad back then, imagine the smoke shooting out of His ears now.

I pay really close attention to Mary sightings. Here is Mary come right down from heaven to give us the latest messages. Just about every time she visits she tell us that Jesus is pretty much up in heaven saying to her , "Hold Me back! Hold Me back!" And she has been doing just that since at least 1917. She tells us that if we say the rosary the world will be a better place and Jesus will calm down. So far it's been working.

Sure things are bumpy at the moment. But Russia did fall and two World Wars ended. I can't imagine Jesus is very calm at the moment, especially if He's been watching campaign commercials, so once again this year, the rosary it is for my extra hour.

Still.... I feel I should try to be more ....creative. I thought maybe I would take Sister Mary Fiacre out in her wheelchair for a spin around the neighborhood to look at the Halloween decorations. She won't notice them. But it's the thought that counts. It's always good to give her an airing.

Hanging around with Sister Mary Fiacre covers five out of seven of the corporal works of mercy. She's both sick and imprisoned. Imprisoned in her own body. We have to feed her, get her dressed. All that's left is sheltering the homeless and burying the dead. Maybe Teddy will bring us something dead and we won't fling it over the wall this time. Then I'd be six for seven.

Or I could clean up the neighbor's driveway. Our neighbor's like to use their driveway for extra storage space. I've never seen a car there. I've seen bikes, tires, TV's, lawn chairs, trampolines, beer cans, amplifiers, fishing equipment, big wheels, empty bird cages and a pony. I suppose there could be a car there under all that stuff. Cleaning the driveway would probably take more than an hour though and the neighbors might be insulted.

I could do most of Sister St. Aloysius' chores. Fat chance. They're somehow always done. I think maybe she is a secret bi-locator, like St. Martin de Porres and Padre Pio. The refrigerator is immaculate. And I don't use that word lightly.

I could dust pews. Go the extra mile and use Murphy's Oil Soap.

I think I"ll go for the walk. I can probably say a rosary at the same time. We'll all sleep better. The next question is...just when does the hour start?
Posted by Sister Mary Martha at 8:58 PM

I feel compelled to note that the smoke-like substance coming out of the ears of Jesus is, in actuality, steam.

Or you could spend it, like I did, with people throwing up... Our Lady didn't say anything about that though, so your better off with the rosary.

If she weren't dead I would think it was my AUnt Betty next door to you. When she died and we went through her things we found a grand piano in her living room that nobody knew was there because of the stuff piled around and on it.

the hour begins promptly at 2 am.

The hour may begin at 2 AM, but if you're asleep you don't experience the hour. If you wait to set your clock back until you wake up, that's when the hour begins. You can have your hour whenever you choose.

I have a question for Sister Mary Martha. I was raised catholic until I was 6, then my parents were basically nothing until I was 12. I became a born again christian at 15, a lutheran by marriage at 18, and am kind of a nothing now.

With so many different religions in this world, how do you figure out which one is the right one? Every religion thinks that they are the one true religion.

Gee, Jan, I guess I wear this outfit because I am filled with doubt about which path is the right one. I'm so wishy washy on the subject that I wrap my whole head in cotton starched to within an inch of it's life.

Here's how it works historically. God invents:
Jews, who are waiting for the Messiah,
Jesus, who invents the Catholic Church
("you are Peter..the first Pope..and upon this rock I will build by Church")
the end.

Everyone else is making it up.

Dear Sister, your blog is such a delight...would you consider joining the Catholic Carnival? It is a weekly group of bloggers who submit their posts all together and one blogger "hosts" all the different postings on their blog. Saves time surfing around all the different blogger's pages and it it gives us a warm, community, fuzzy-like feeling. And it's free. And you dont even have to say special prayers or buy Girl Scout cookies. Come and see: http://themagdalenediaries.blogspot.com

"Just about every time she visits she tell us that Jesus is pretty much up in heaven saying to her , "Hold Me back! Hold Me back!"

I love the example, and it is so true.

When we face Him, we can't say we weren't warned!