I never understood the popularity of the old Batman television show, fleeting though it may have been. I suppose some people thought it was funny. It was too stupid even to be funny. That poor anemic, droopy Batman with his stiff dialogue and tiny budget had none of the 'suspension of disbelief' necessary for even a comic book hero.

You've heard of 'suspension of disbelief'? 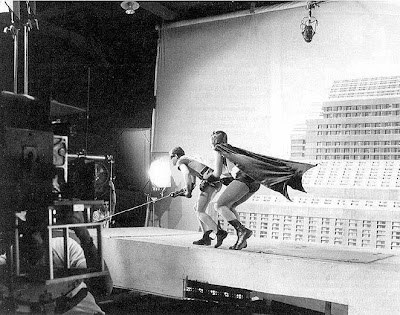 It's the hallmark of fantasy
writing. That's when a fantasy story sets you up in some kind of comfort zone where you can buy into the premise and then sit back and relax and enjoy a story of something that could never happen. In Peter Pan, for example, we first see the Darling children as they prepare for bed in a sweet and normal bedtime scene before a flying boy with a fairy friend flies into the window and takes them all away.

Poor Batman was flabby looking in a skinny sort of way. Not a good look for a crime fighter. We really couldn't buy him as a millionaire or a super hero. He was stiff and clumsy. The villains were silly and the plots thin. 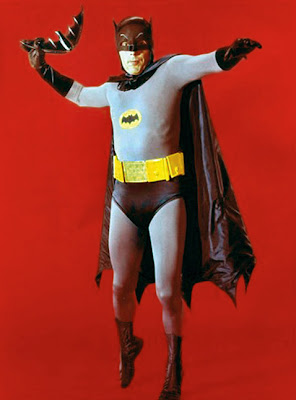 But the kicker for me, back in the day, was that at the end of part one of each episode there would be the cliffhanger where the villain had captured Batman and was dangling Batman (and usually Robin) over a vat of something that would kill him once he fell in. A candle would be burning through the rope as the villain left the scene, laughing his fool head off, and Batman would use his utility belt somehow or another to escape.

And I always thought, "If you want Batman dead, just shoot him before you leave." The fact that nobody ever just shot Batman in the head was the stupidest part of the show.

I suppose we were just supposed to think that the villains were crazy or maybe 'sporting'. I think it was just very lazy writing. Same Bat Time, Same Bat Channel, Same Bat Plotline.

But then yesterday, when I was talking about St. Jonas of Hubahem, it occurred to me that there are quite a few saints who had the Batman treatment. 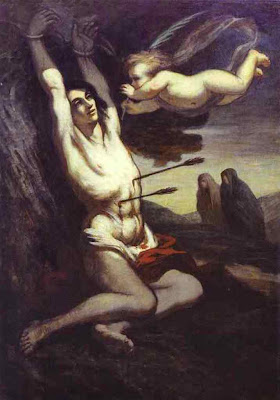 St. Sebastian was tied to a tree and shot full of arrows. The villains left, but Sebastian was rescued by St. Irene who nursed him back to health. When St. Sebastian went to give his tormentors what for, they finished the job with clubs.

St. Catherine of Alexandria was tied to a wheel but that didn't work so she was beheaded.

St. Florian was flayed alive and set on fire. That didn't work so he was thrown into a river.

St. Cecilia was locked in her own bathroom in an attempt to steam her to death. When that didn't work someone was sent in to behead her. That didn't work either, at least for the next three days. St. Cecilia had time to put her affairs in order before expiring.

And this is just the tip of the iceberg.

Move over Batman villains. Make way for the pagans and the heathens.
Posted by Sister Mary Martha at 10:49 AM

How about St. Philomena? She didn't drown with an anchor around her neck, and the arrows Roman soldiers shot at her changed direction. Finally they drove a lance through the back of her neck.

St. Margaret Mary Alacoque was at a dance and the story says the devil (who had blue light coming from his feet) would not dance with her because she was wearing the Miraculous Medal.

What's your problem with the caped crusader? I rushed home from school each day to catch every episode! Sure it is silly now, but to a nine year old boy it was great! Also, I always wondered why not just cut the martyrs heads off. Not everyone can be St. Hilary.

You are amazing, SMM.

As a Protestant, I know very little about the obscure saints. But I sure do get big laughs from your blog. I love your sense of humor!

We never had a TV when I was young. Then, when I was about thirteen, we got one, but none of the kids were allowed to watch it. I felt deprived but now I rarely watch TV. I spend my time working and reading blogs. Perhaps my father was right when he called the TV a garbage can???

I think #7 on "Peter's Evil Overlord List" is what you had in mind.

This is off the subject, but any book recommendations for someone discerning a religious vocation???

your dad was right. I've written on this topic a couple of times:

I liked the Evil Overlord List, although I haven't had time to read the whole thing. Judging from the list, most of what undoes the villains is arrogance and lack of moderation.

Sister, I have a question. On Palm Sunday, besides going to Mass, I have been invited to a non-funeral/non-memorial service for a deceased relative. (He was adamant about not wanting a memorial or funeral, so that's not what we're calling it.) Why Palm Sunday? I'm getting to that.

The man's wife has chartered a boat to sail out a mile into the ocean so that his cremated remains can be scattered at sea. The boat is rented for this specific purpose, and it's really hard to reserve, which is why she's left with Palm Sunday, a day she wouldn't ordinarily choose.

Anyway, when the ashes are sprinkled overboard, the attendees on the boat will probably throw down some flowers, too. Here is my question. Would it be appropriate for me to include some blessed palm leaves along with my tossed flowers?

We had a b&w tv, when I was little in the '60s, and I remember watching Batman. It was very hokey, and I remember preferring series like, The Man from U.N.C.L.E., because Ilya Kuryakin and Napoleon Solo were much cooler heroes. :)

I grew up as part of what was called the tv generation, and I certainly didn't abstain from watching it, though when you contrast the time we spent in front of the television, with children and teens today, we watched far less. We went out and played much more. I watch very little tv these days, and my daughter is much the same.

When I was going through my vocational discernment process, I read "Peter on the Shore" by Fr. Anthony Bannon and "Finding God's Will for You" by St. Francis de Sales, among lots of others. But these two were particularly helpful for me.

Hope they're helpful for you too!

Thank you Kelly! I will look into those books!

If you have any other titles i would greatly appreciate those.

You can email that to me: brittany.staires@gmail.com