Ready for Our Close Up 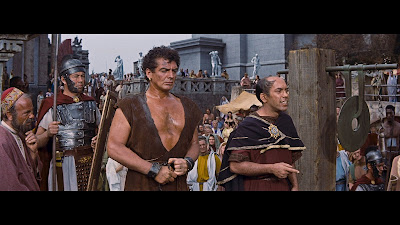 1. Some sort of attempt at the actual Bible story. "King of Kings", "The Greatest Story Ever Told" "The Passion of the Christ", "The Ten Commandments", etc.

2. Movies based on some sort of entirely fictional back story of some character from the Bible. "Barabbas", "The Robe", etc.

3. Movies that take place in a Biblical time in which Jesus supposedly lived, with Jesus in them, but not Jesus, just the hand of Jesus or the foot of Jesus or the voice of Jesus. His hand, foot or voice is always accompanied by heavenly music, otherwise we'd never know whose hand or foot or voice it was. I can still hear the music from "Ben Hur" whenever Jesus floats by, giving Charlton H 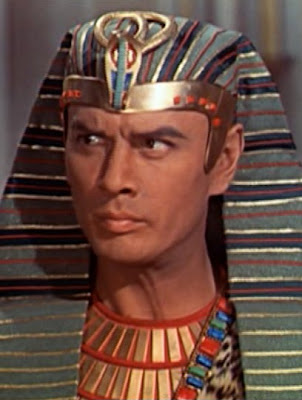 eston some water or trudging up to Calvary.


I like all Bible movies for the hats. The main characters never seem to have any kind of elaborate hat on, but everybody else, especially the Bible villains and the henchmen extras have on one crazy hat after another. Except for Yul Brynner as the Pharaoh. You'd think he'd want to wear a hat. I'm sure he has some sort of Pharaoh hat on at least once in the film. 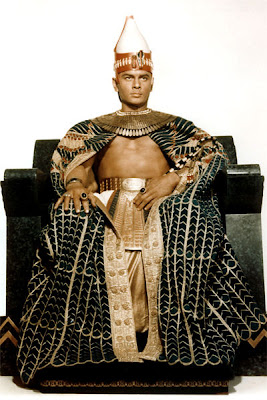 Secondly, the casting. I have a few big favorites: 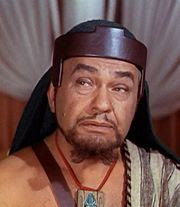 1. Edward G. Robinson as that wrench-in-the-works guy who whips everyone into building a golden idol frenzy while Charlton Heston's Moses is up on the mountain turning gray getting his hands on the Ten Commandments.

2. John Wayne as the Centurion who announces with that John Wayne cadence of his (since John Wayne only ever plays John Wayne), "Truly this was the SonofGOD."

3. My all time favorite, in "The Greatest Story Ever Told", when the apostles hear that the stone has been rolled away from the tomb of Jesus and go running over there to see what happened, there on the slab, as an angel, is none other than Pat Boone.

But as I said, I truly admire the writers who come up with the further story of Barabbas and what happened to John Wayne after he turns into Richard Burton and wins "The Robe". (At least he becomes a more distinguished actor.) I have always had a feeling of wishing I had thought of that.

I was mulling this over the other day when I realized that the Church has been no slouch in this department having included into our Sacred tradition the back story of the Virgin Mary, the circumstances of her birth, childhood and marriage to St. Joseph and also the back story of some of what was going on with Joseph in the first place. 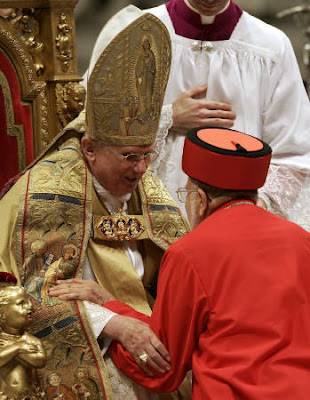 We also have the after story of Mary in her old age and death, her Assumption into heaven, her little house and her flying house.

Which made me also realize that we have quite a few greatly embellished stories of our saints. St. Christopher springs to mind.

So, as with everything else, the Catholic Church has paved the way once again, even for the Golden Days of Hollywood.

And we already have the hats.
Posted by Sister Mary Martha at 2:20 PM

I tell you one of the saints killed a dragon or had a dragon as a pet. Now either there were dragons or this saint was delusional.

Then there's "Monty Python's Life of Brian." Not exactly a 2, because Brian is totally fictional (I think). Not exactly a 3, because we do see Jesus's full figure preaching the Sermon on the Mount.

Hm! Maybe the hats are why Mr. Chick gets so freaked about the Catholic Church. Bible movies clearly had an impact on his works. No wonder he always mistakes the Pope for some third-class Babylonian/Egyptian/whatev villain. Elaborate hat signals "baddy". So there. No more bible movies for you, Mister.

Ben-Hur is my favourite movie of all time, especially the performance of the villain, Messala, played by the wonderful Irish actor, Stephen Boyd, who is sadly no longer with us. I've often strayed into the realm of fantasy about this story, wondering what might have happened if Messala had met, and been converted by, Our Lord. A reconciliation with Ben-Hur, perhaps? There's a book in there somewhere, perhaps...

Okay, the red/orange cheese head is my new favorite hat.

Sister, I want to thank you for making this blog. It has been vital in my rediscovery of the faith that I was born into.

As a high school Junior, I am currently preparing myself the dreaded college admissions process. I know, I know, offer it up for the church suffering. But I was wondering if you could possibly match me and my applications up with some saintly aid for the long and arduous months ahead. (And having some holy help when the admissions officers are reading my applications wouldn't be too horrible, either.)

Sister, I just had a conversation with my teenage sons about intercessory prayer. Basically, they are saying, "Why bother? God's will is going to be done for them anyway. You can pray for His will to be done, but then again it will be done, anyway." I say that Jesus wanted us to pray, so we should do it. They point out that Jesus never said we should pray for Sam's Uncle Frank to find a new job. I think they're being kind of heartless and should have more empathy, but they don't see it that way.

Anyway, it helps to know people are praying for you. Recently, my daughter was hospitalized, and we got a "spiritual bouquet" from a son's classmates listing all the prayers and Masses everyone prayed. I was very grateful. Of, course, was this just an empty gesture, seeing as God was going to heal her anyway? I just can't believe that, but don't know how to explain it.

There have been scientific studies done to evaluate the efficacy of prayer. Here's one link -
http://www.plim.org/PrayerDeb.htm

Let your sons google for others and they may understand "why" we should pray for others.

The hats are fabulous.

The darlings and I wore hats on Easter and being the only ones wearing them, the oldest took her's off, and so on until the Little One insisted on being carried which pulled Mama's so askew that it popped off leaving hat hair.

And thank you for dealing with the Bible vs Tradition in a wholesome way. I only recently learned of the "flying house" on Bob and Penny Lord's Super Saints.
I often have put some of those stories in the same relm of family stories. All those family histories that get told over and over thru the years.

It's true: Hollywood movies were the original fan fic!

Happy Easter and Happy Divine Mercy Sunday to the Sisters, and all you readers!

I have been reading the Catechism regarding Prayer. That's probably the first step I should have taken.

Sister, you and your readers might like to check out sqpn.com for fun, informative, and faithful Catholic podcasts. I think you would especially like listening to The SaintCast. The host, Dr. Paul Camarata, knows almost as much about saints as Sister Mary Martha.