The Church Triumphant With Ear Trumpets

I believe that if I have one cross to bear in life, made doubly burdensome by my own devotion and interest in our beloved saints, it's this endless argument:

I can only speak for myself, but as a protestant, the reason I reject asking those in heaven to pray for me (and certainly reject praying TO them) is that I believe there is one mediator between God and Man: Jesus (1 Tim 2:5). Further, God does not answer prayers based on WHO is praying/asking, but based on praying according to HIS WILL. I believe we can confidently come before God with our prayers, knowing that HE hears us (1 John 5:14-15).

Further, I do not find any biblical reference suggesting we ask saints/those in heaven to pray for us. Are there? All biblical examples I have of people "speaking" to those who have died are in the context of witchcraft/sorcery/divination/necromancy.(1 Sam. 28, Lev. 20:27, Deut. 18:10-13)


While I believe those in heaven are aware of what is happening on Earth, I see no biblical evidence that they can necessarily "hear" us. While they are in heaven, they are still finite beings, not omniscient. 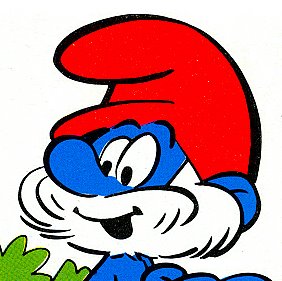 I do think there is a general misunderstanding of Catholic doctrines in the protestant church, and certainly, among my Catholic friends, I have heard them say they are "praying TO St. XYZ" or praying a novena TO so-and-so, which clearly doesn't help the understanding of the actual Church doctrine.

My face is permanently blue trying to explain.  I will never give up.  I will eventually expire, and when I do, I will resemble Papa Smurf.

So let's take your objection a step at a time.  "There is but one mediator between God and man: Jesus."  Only God can answer our prayers. Jesus is God. Did that slip your mind?  When you pray to Jesus you are praying to God.

But going along with your premise, do you never ask people around you to pray for you?  I can't believe that you don't.  You are asking them to pray to Jesus, God, the Holy Trinity,  for you.

In the Catholic Church we believe that those who are with Jesus in Heaven are just as active in their prayers for us as is your or daughter or butcher or preacher or whoever it is that you are asking to pray for you. 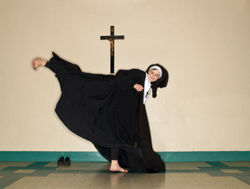 That's why all the prayers asking for intercession end in "Pray for us".  I can't picture a Heaven where the Church Triumphant (which is what we call those people who have "arrived") are just running around, jumping and skipping and sticking their fingers in their ears and humming.  God cares about us here on Earth.  Why would anyone think that people who are now with God don't care.  After all, one makes it to Heaven by being in harmony with God.  And they are no longer finite beings, but have life everlasting. Hooray for them! I hope they are praying for me. I can't think of anyone better to ask to pray for me, than people who have won the battle that I am still fighting, so to speak.

I generally don't get into "Bible fights".  But here are a bunch of Bible moments in which the early church talks about praying for each other.

We believe that the saints in Heaven are as much a part of our Church as the guy in the pew next to us. But....this is a very important "but" about your Bible quotes....we strongly discourage the Church Militant (the arm of the Church here on earth) from asking for the intercession of the Church Triumphant unless they know for a fact that the person they are asking to pray for them is in Heaven.  Which is why we canonize saints.  Heavenly proof of Heavenly Triumph.  We don't want you asking Uncle Bob to pray for you.  We love Uncle Bob, but only God knows what happened to him. We hope the best.  But the devil is tricky.  You may think it's Uncle Bob, but it's really Uncle BeelzeBob. 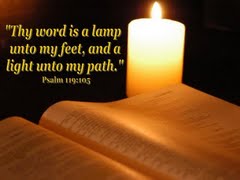 We do pay attention to Scripture.

I certainly hear many, many Catholics saying they are praying TO a saint. They actually may misunderstand the doctrine themselves.  But most of them do understand.  It's just Catholic shorthand for what's really going on.  Like when you say you're going to "make dinner", when actually, you have to boil water, wash meat, cut up vegetables and try not to burn yourself, put on the pasta, put the meat in the oven, throw the vegetables in the microwave.....

Our real difference seems to lie only in the disagreement of what goes on in Heaven.  I believe that those who in harmony with God, care for us as He does.
Posted by Sister Mary Martha at 9:47 PM

Thank you Sister for your guidance. I always find myself doubting/distracted when I am asking God for something. So I imagine it must be the same for most of on earth. I like the fact that I can rely on my triumphant brothers and sisters in heaven!!

Protestant shorthand...We have a direct line to God.

Ummm, I don't know who the saint of the day is, but I do have a comment on the entry for today.

I had learned that to say we are "praying" to some saint, is a leftover from formal, early English, as in "I pray you my Lord to give me the hand of your daughter in marriage." In that context, to pray is to formally ask. But to pray is different from to worship, which is to glorify and congratulate the goodness and perfection of God. And of course no Catholic will worship a saint or anyone - even our local football team (although we might need an occasional nudge to keep that straight). In "Catholic speak", there is a whole different set of definitions than in "Protestant speak", like the words grace, conversion, communion, saint, etc. Common cause of difficulties in understanding is it not, that difference in definitions.

'All biblical examples I have of people "speaking" to those who have died are in the context of witchcraft/sorcery/divination/necromancy.'
I know this isn't exactly to the point of the this person's complaint, but do they not have the Transfiguration in the KJ Bible?? When Jesus *speaks* with Moses, he is engaged in necromancy?? Certainly, Christ is an exceptional example of a person, but still... Just struck me as an odd remark.

FANTASTIC post, SMM. Anyone who could misunderstand you or disagree with you at this point is either doing so willfully, as they're extremely narrow minded, or has problems with their reading comprehension skills. ;D

Keep up the good work!

At my grandmother's funeral, the priest told the congregation that Granny had been a saint whilst she was alive - and I hgave not the slightest hesitation in asking for her intercession now, with all the prayers I am saying for the restoration of health to my son who has leukaemia.
I feel comforted.

Doesn't 2 Maccabees 15:11-17 speak about prayers of the Saints for the living? Oh, wait that doesn't count as sola scriptura in a Protestant bible since they took it out...

About Protestant shorthand, are you saying you have never and will never ask your friends or family to pray for you as YOU have a direct line to God and don't need any help?
I have prayed the front cover off of my Novena for the Relief of the Poor Souls in Purgatory but I know it had an imprimatur. The author states that the Holy Souls are so greatful for the prayers of their benefactors they will pray to the Lord on behalf of those who pray for them and that Jesus is very moved by the petitions presented by the Holy Souls.
I have been told by several priests that since mentally handicapped persons are incapable of sin, that those persons go straight to heaven, no stop over in Purgatory and thus are in a great place to help out those who will ask for their prayers.

Well, at least one Protestant has been listening. I used to think Catholics were wrong for praying to the saints, but when I've read your explanations in previous posts, as well as some other books, it does makes sense. I'm not sure I believe saints in heaven can actually hear you praying to them, but it's certainly not "witchcraft/ necromancy." The Bible says very little about what heaven is like, so it could very well be true. It's a beautiful thought that maybe the saints can hear your prayers to them, and yes I'm sure they are praying for you if they can hear you.

To my fellow Protestants I highly recommend Catholicism for Dummies. It explains things that we often misunderstand, including this issue. Read it, and you will realize that Catholics and Protestants truly are brothers and sisters! We agree about Who Christ is and what He has done for us, and that is what matters.

Hi, Sister. I am subbing for one of our catechists next week and we had her middle schoolers (first year of religious ed) write out some of the questions they have been asking. There aren't any I can't handle the basics of, but your thoughts or some references would be helpful in preparing.

The two top topics are the liturgical colors--why they are used in different seasons, and more information about the altar. (Oh, the saints came in third.)

As one who had to defend--and therefore rediscover--her faith against evangelical Christians, I highly recommend Born Fundamentalist, Born Again Catholic. A reasoned, informed and respectful answer to the Saints question and all other misguided or misinformed assumptions about Catholicism. I honestly tire of the bickering among Christians. Aren't we attacked enough from non-Christians--especially the aggressive atheists? How do we have time to attack each other for kneeling or not kneeling or praying this way or that? Bless you, Sister, for your wise words.

I am also a Protestant that thinks your reasoning regarding the saints make sense. But today you discouraged people to ask for the prayers of someone that has not been canonised.

If I have understood correctly there has to be two miracles connected to the intervention of a certain (dead) person for that person to be canonised.

How do the intervention take place, and how do you know that this "saint to be" is in it, if you are not asking for that persons prayers before they are canonised?

Dear SSM: in all the talk about protestants and saints and praying TO saints so they can pray for us, I have a question.

Is there a saint one can pray about a Catholic lay preacher who was part of the Charismatic movement and now has left the faith to become a protestant preacher?? (ok, got my head dizzy just trying to type that)

And don't let's forget Revelations where the saints are busy praying for us. You know, the incense mingling with the prayers of the saints and all. Surely Protestant Bibles have Revelations, don't they?

Just thought I'd pipe up with another Biblical reference...

People are ridiculous at times.

There is a quote, and I don't remember who said it, it made a lot of sense.

" Oh foolish Man, who could not possibly create a worm, yet will make gods by the dozens."