The Mass is Ended, But Don't Leave Yet 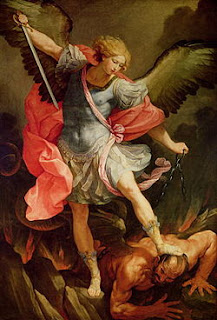 Hi Sister
I recently moved from California to Washington DC, where after daily mass, the Prayer to St Michael is recited. How come? It was never done at either parish I attended out west, nor was it done when I formerly attended this same parish in DC back in the 80s and 90s.
Thanks Sister, I really enjoy your blog.

Interesting question.  So often I find that parishioners are disgruntled at prayers added to the end of the Mass. I know this for a fact, because... they don't stay for them.

I also know a number of priests who are disgruntled at prayers added to the end of Mass because they are sticklers for the proper way to say Mass, and technically, the Mass is not supposed to have prayers tacked on to the end of it, the rule since 1964.

But then, one might argue (and believe me, I've listened to them argue), that these prayers haven't been added to the end of the Mass. They are said after the Mass has ended, as in, "the Mass is ended, go in peace.  And now, the Prayer to St. Michael."

I just....are extra prayers ever a bad thing?  I'm so grateful that it's my job to make sure the coffee pot gets emptied or some such busy thing I can busy myself with.  I can spend the time banging around in the kitchen saying the prayer to St. Michael 40 some odd times, one for each of the people who ditched the prayer after the Mass.

So, what's the beef? 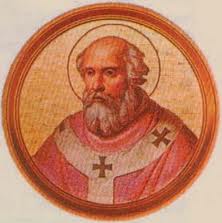 The Prayer to St. Michael is only one prayer in a group of prayers that were tacked on to the end of the Mass because the Church was in danger from the state, which had taken over the Vatican.  I think...something like that...the Church was in danger, that's the main thing to remember.  And the Pope asked everyone to add these prayers.  They are called the Leonine prayers.  (Can you guess which Pope asked for them?)  They consist of 3 Hail Mary's, the Hail Holy Queen, a prayer for the liberty and exaltation of the Church, the St. Michael Prayer, and 3 prayers to the Sacred Heart to have mercy on us.  And if you want to split hairs, the Leonine Prayers did not originally include the St. Michael Prayer.  That was added by Pope Leo XIII.

Wonder how many people fled to the parking lot before that was over with?

Then, at Vatican II, the Church wanted to make sure the Mass was "pure",  simple, back to basics. So the Leonine prayers went away.

So it would appear that various parishes across the land feel the need to call on St. Michael's intercession to protect the Church in troubled times once again.  I can see where Washington DC would be one of those places.

Is it okay?  Yes.  It's actually after the Mass.  Do you have to do it? No.  Is everyone doing it? No. Am I for it?  I can't see where extra prayers are ever a bad thing.

But I have to put the coffee on.

The St. Michael Prayer
Saint Michael the Archangel,
defend us in battle;
be our protection against the wickedness and snares of the devil.
May God rebuke him, we humbly pray:
and do thou, O Prince of the heavenly host,
by the power of God,
thrust into hell Satan and all the evil spirits
who prowl about the world seeking the ruin of souls.
Amen.
Posted by Sister Mary Martha at 8:00 AM

Our CA church prays the St. Michael prayer. I love it- my daughter with her wiggly toddler- not so much. :)

I thought that the Prayers after Low Mass were for the conversion of Russia!!.....which seems to be moving on apace these days.

I think the best way I have discovered that this can be handled is to have the Bishop decide it is to be done AFTER the Mass, or to have a member of the congregation lead it.

That being said, my wife and I say it out loud, quietly, after MAss. People have begun to join in.

These are the prayers that were added to protect the people of Europe from the "Scourge of the North"-- the Vikings.

I live in the Diocese of Joliet. Our former bishop, Bishop Sartain, instituted special prayers after communion as part of a focus theme for the diocese. During the "Year of the Priest" it was a prayer for vocations. During the "Year of the Eucharist" it was a version of the Anima Christi". Some parishes combine that with passing a traveling statues among families in the parish.

I think it has been an awesome way to introduce beautiful prayers that the average Catholic may be otherwise unaware. The traveling statue offers a visible reminder to the host family to pray more throughout the week. And can we ever have too many prayers??

Of course, I find the people that aren't going to stick around for an extra prayer or two probably bolted right after they received communion anyway.

We say the St. Michael prayer after mass at our church. We pray it for our troops, that St. Michael may interced for them and keep them safe. God bless our troops!!! We are in the DC Metro Area.

Just this last April, His Excellency the Most Reverend Thomas John Paprocki, Bishop of Springfield in Illinois, authorized the public recitation of the Prayer to St. Michael the Archangel following the dismissal at the end of Mass and before the recession. So clearly the re-institution of this devotion is spreading.

Sit in the back and your can "sneak out." IF it bothers you find another church....

It;s been a while since Vat-II so I don't remember if these prayers were part of the Triditine Mass (now known as the Extraodinary Form). Was your questioner by chance attending one of the EF Masses in DC?

This is a silly thing to bother me I know, but it really, really does. At our church they've changed "This is the word of the Lord" to "The word of the Lord". It was changed years ago and when our new Priest arrived we thankfully found the "This is" again, but now it's gone again. Is it just us?

"The Word of the Lord" has always been the "correct" line. "This is" was added by lots of readers, but is not in the prescribed texts for the Lectionary. Likewise, Eucharistic Ministers are exhorted to say "Body of Christ" and "Blood of Christ" not "the Body..." or "The Blood..."

I am the asker of this question - it wasn't that it bothered me, or I was in any way annoyed, offended or in a huff ... I just wondered why. I did think maybe it was added after Sept 11 ...
And yes, it is done after mass ends, and I respectfully wait until it is finished, and the few who do leave probably have to get to the office, as it is done at daily mass.
Thanks for the info, both to Sister and commenters.

On October 13, 1884 Pope Leo XIII had just completed a celebration of Mass in one of the Vatican's private chapels. Standing at the foot of the altar, he suddenly turned ashen and collapsed to the floor, apparently the victim of a stroke or heart attack. However, neither malady was the cause of his collapse. For he had just been given a vision of the future of the Church he loved so much. After a few minutes spent in what seemed like a coma, he revived and remarked to those around him, "Oh, what a horrible picture I was permitted to see!"
During Pope Leo's ecstasy he heard two voices, one deep and coarse which he understood to be Satan challenging the other voice, Jesus. Paraphrasing:
Satan: "Given enough time and enough power I can defeat your church."
Jesus: "How much time and how much power?"
Satan: "100 years and the power over those who would serve me."
Jesus: "You will have the power and the time."
What Leo XIII apparently saw, as described later by those who talked to him at the time of his vision, was a period of about one hundred years when the power of Satan would reach its zenith. That period was to be the twentieth century. Leo was so shaken by the spectre of the destruction of moral and spiritual values both inside and outside the Church, that he composed a prayer which was to be said at the end of each Mass celebrated anywhere in the Catholic Church. This prayer to Michael the Archangel was said continuously until the Mass was restructured in the Second Vatican council. The prayer is as follows:
"Saint Michael the Archangel, defend us in battle; be our defense against the wickedness and snares of the devil. May God rebuke him, we humbly pray; and do you, O Prince of the heavenly host, by the power of God, thrust into hell Satan and the other evil spirits who prowl about the world for the ruin of souls. Amen."
While this prayer may now seem quaint and mildly embarrassing to the modern reader with its reference to Satan and evil spirits, it should be noted that virtually all measures of social pathology and moral decline (things like the crime rate, percentage of unwed mothers, abortion rate, divorce rate, etc.) each started to rise sharply as the 1960's ended...a few years after this prayer had ceased being used in Church liturgies. Regardless, while the precise details of Leo's visions are not known, it would certainly appear that his concern about the coming difficulties in his Church and the world in which it found itself were well founded.

Thank you, Anonymous. You explained this better than I could.

I have often said the Church is responsible for so much of its own decline because this prayer - and the attitude of piety it represented - was abandoned when we grew so sophisticated that "this prayer...seem[ed] quaint and mildly embarrassing."
Linda

We say Mother Teresa's prayer after the Intercessions. I find it out of place and do not say it. If it were after Mass I might join in.