Zinga Go the Strings of My Heart 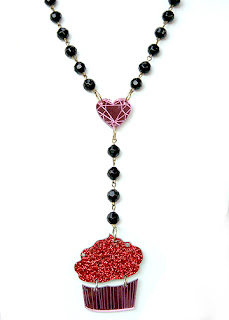 Well, I said my rosary opinion would elicit the wailing and gnashing of teeth in the peanut gallery and it did.  It did. (See the comments section of my last post.)
In a nutshell, my general thought was that if you don't have time to say the rosary, just say some other prayer, or prayers. For example, instead of driving along trying to say ten "Hail Mary's" (and keep count with your hands on the wheel) while also trying to meditate on seeing the life of Jesus through His Mother's eyes ( a tall order), why not just say a bunch of "Hail Mary's" while you drive?
I did mention, however, that I would never discourage anyone from praying just about any way they like. Because that would be crazy, coming from a person who strongly advocates the use of sacramentals.   The whole point of sacramentals is to keep God on your mind as much as possible, even if it's just on a seldom noticed chain around your neck.
So, of course, go for it. 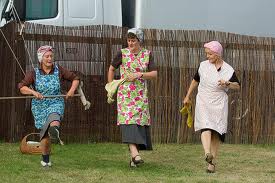 I was amazed at the number of people who pray the rosary while cleaning the house.  Not that I would be surprised that anyone would do that.  There isn't a nun in the world that doesn't fill otherwise mindless activity with prayer.  (Not rosaries, though. FYI)
It was the picture in my mind of "Mary's Army".
And in answer to this question:
Sister, I'm intrigued by the photo of the cupcake rosary you posted here. Seems like it would be fun to do at my son's (Catholic) school...I think. Anything to keep the kids interested in the faith, right? Or is it a bit blasphemous to eat an image of the rosary? I've heard of chocolate rosaries, too. What do you and your readers think?
Anything?  No, not anything.  But once you've made a rosary out of cupcakes, you'd better eat it, or you're being wasteful.  What part of Mary's life shall we contemplate while we savor?  Or...contemplate first, eat after.....
Meanwhile, some names just pop out at us, peaking our curiosity.
I'd like to hear what you know about St. Kunegunda. I have a relative with this name. The relative I know for sure with this name wasn't born on the feast day that I located for St. Kunegunda (June 24). As you can guess, she was a Polish lady. But her birthday was in March. I'm curious about the name because it's unusual even in my very Polish family. I had never even heard of the name until I "dug up" Kunegunda with my genealogical research.
I am happy to help!  I might drive and do the laundry while I tell you about St. Kundegunda!
St. Kundegunda is doubly royal.  She was one of those royal types who married a prince and when he ascended to the throne of Princedom she became a Princess.  But the royal types in her family (who were also earthly Queens and Princesses) were also saints.  She is the niece of St. Elizabeth of Hungary and the great niece of St. Hedwig of Hungary.  Her sister, Margaret, is also better known as St. Margaret of Hungary. 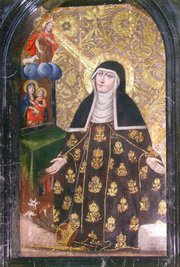 Kundegunda married Boleslav V of Poland, also known as Boleslav the Chaste.  Good news for her! She had wanted to remain chaste anyhow!  When he moved on to his heavenly reward, she left her cushy government job and gave everything to the poor, locking herself away for a life of contemplative prayer, which I'm sure included praying whilst washing and starching her habit.
You know, back in the day, they had these big vats of starch on the stove and they would dip the parts of their habits that needed stiffening in the vats over and over again.
In any case, she had founded a convent of Poor Clares before she left off being a Princess and that's where she spent her remaining days. She is the patron saint of Poland and Lithuania.
But I think she should be the patron saint of pretty, pretty Princesses who hold tea parties with their dolls, as they could aspire to spend their lives the way good Princesses should, by devoting themselves to the poor and lepers and staying chaste and eventually becoming a nun.
She can also be the patron saint of people who struggle with patience, as she died in 1292, and waited to be beatified for 400 years and then waited to be canonized for another 309 years.
But perhaps the best patronage for her would be for those people who are saddled with some crazy name that no one can remember or spell right, as she is known as Kinga, Cundegunda, Kunigunda, Cundgundes, Kioga and Zinga.
Posted by Sister Mary Martha at 4:46 PM

If any of the California celebrity crowd gets wind of these names maybe there will be increase in their use.

I know this is a few posts back, but I'm catching up. Thank you for St. Michael the Archangel's prayer. I have started going to morning mass and we say it after the mass. Only morning masses though. So, being a new Catholic, I didn't know it. I know I could have looked it up, but thanks for sparing me the trouble.

Thanks, Sister, for the explanation of the name Kunegunda. I think Kunegunda probably had to have a lot of patience in her life. After all, she appeared to travel all alone to the US to join her sisters and then she managed to raise a large brood of children after marrying. But I kind of doubt she would have starched her habit--she just probably didn't have the time raising nine children!!

Happy belated Feast of the Canadian Martyrs. I will have to tell my son about St. Kundegunda. At the end of the school day, at my son's school, all the children (there are only 20 or so) name a saint and we all say "Pray for Us." Unless, that is, someone says "Sacred Heart of Jesus," and then everyone has to say, "Have mercy on us." It sort of shows who's paying attention. Anyway, he wanted to put out some more unusual saints names for that time. The children and teachers also pray a novena to Our Lady of Good Remedy. (I know, it's some kind of good school!) Can you tell us more about this Novena?