Last Anointing of the Sick Rites

We have a nun overlap here, as Sister St. Aloysius is back, but Sister Julie has not gone. And look! I have time on my hands!


Sister Mary Martha,
My Mom died in a nursing home last November. She was unconscious and her heart just stopped after 3 days. Our family called the priest who ministered the Last Rites. She could not receive the eucharist as she just looked like she was sleeping. He was very joyful and told us Mom would go straight to heaven when she dies. We prayed the rosary many times as a family for her and said our goodbyes. She was unable to have her last confession and was somewhat confused the last year, but attended weekly mass. I thought she would still make a stop in Purgatory. I am not taking chances and have masses for her. She suffered much in her life and I would love to think Father was correct, but it sounds too easy the way he told us. What do you think? Thank you. 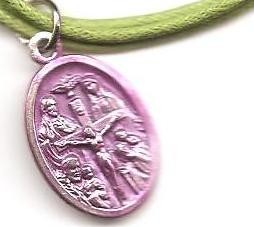 Yep!  The priest is right.  He wasn't just trying to feed you some feel good claptrap about a happy place in Heaven. Extreme Unction, Last Rites, Anointing of the Sick, Sacrament of the Sick, whatever we're calling it these days, forgives all sin and removes all temporal punishment, which is why you definitely want one of these.

There is a teeny bit of wiggle room.  She has been forgiven.  But in order to get absolution one has to be truly sorry for their sins.  So, there is a chance that the absolution wasn't absolute.

But she did get absolution from the priest, which reconciles her with God.  We can't say with one hundred per cent certainty that there isn't a stop in Purgatory. But we can be pretty confident she's in Heaven. If I had to put money on it, I'd say "Straight to Heaven."

Don't worry about the prayers for the dead, they'll make their way to someone who needs them, like throwing fish back into the pond when you catch a few over the limit.

How blessed that she had a peaceful passing with a priest present.  No wonder he was in a good mood. It must feel great to swing open the gates of Heaven for people.
Posted by Sister Mary Martha at 10:29 AM

Sister, the mass readings yesterday seemed so appropriate for the Sept. 11 anniversary. I commented to my husband that it was interesting how that worked out, and he says maybe the Bishops council made it work that way on purpose? I know that the cycle is often given options and that certain occasions, such as weddings, have other readings that can replace those for a specific day, but yesterday's were just the luck of the draw, correct?

Anyway, I found them to be comforting and inspiring, and I was glad that Catholics all over were hearing the same sentiments.