My Best Friend the Saint 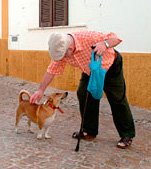 Nuns always address each other as "Sister". You would think that would be confusing, like when my uncle named his dog after himself and every time his wife said, "George, come here" they both came running.

Of course, it's not a problem for us here at the convent. Since Sister Mary Fiacre is pretty much not going to respond, when I say "Sister", Sister St. Aloysuis knows I'm talking to her.

But isn't it interesting that we are all on a first name basis with the saints? No matter how big, or popular or obscure, we just call them Peter or Paul. Even when there's more than one of them, like the St. Theresa's, we don't say St. Avila.

The only one I can think of is Padre Pio, who some people call St. Pio. But then Padre isn't a first name, is it? That would be like calling me Saint Sister if I became a saint. (Fat chance. Although I do think I'll make it to heaven after a long roast in Purgatory. Then I will be a saint, just not a title holder. * But you never know. I could snap some day; people do.) Or Mother Teresa. She's Blessed Mother Teresa. If we call her Blessed Mother we'll have mayhem. But she'll never be St. Teresa, either. She'll have to be St. Mother Teresa or everyone will be confused.

Anyhow, I was wondering why this happened, with so many saints through history that we're still on a first name basis with all of them. I have a theory. (I always do.)

At first, we didn't have that many saints. We had the twelve apostles and a few girls. So we were okay there except for the two James'. Poor St. James the Lesser. That was a stinky thing to do to him, sticking him with that moniker forever. He's only called 'the Lesser' because he became an apostle after St. James the Greater. Couldn't he have been St. James Next or St. James Squared or something?

So everyone is used to calling these saints by the first name, because they didn't have a last name, except for Mary Magdelene. It's good she had a last name because right away we have no Mary confusion. We have the Blessed Mother, Mary the sister of Martha, and Mary Magdelene, so there is only one St. Mary...although...some people do refer to the Blessed Mother as St. Mary. Oh well. We seem to always know to whom we're referring.

And everyone thought Jesus was coming back pretty soon for quite some time, until He didn't. So there was no need to expand the saint naming system.

Then, all heaven breaks loose. But by then we do have a system. Following the lead of Mary Magdelene and Joseph of Aramathea, we just tack on where the person came from. One saint to a town, I guess. Good thing there weren't two St. Josesph's of Aramathea's or we'd have St. Joseph of Aramathea the Lesser.

The second part of my theory is how we managed to maintain the first name basis with so many Peters and Johns and Catherines. I think it's because we like to remember they were just like us, with terrible problems and doubts and crosses to bear and horrible illnesses with no pain killers or portable oxygen tanks and the all that life throws at us, and they still were able to do Christ's bidding. So we look to them, like buddies, to haul us through our own tribulations, which often seem minor compared to, say, having your skin combed with wool brushes or leading an all male army through an entire war and then getting burned as a witch.

I'll be interested to see if Matt Talbot makes it to sainthood, what he's called. I'll put my money on St. Matt Talbot, because even though we're on a first name basis, St. Matt, just sounds too casual.

*Everyone who is in heaven is a saint. A canonized saint is someone who the church as proved to be in heaven, by virtue of two miracles the saint has performed.

When I was in college, there was a floor of Freshmen boys, several of whom were named "John". So the guys gave most of the Johns nicknames, but ran out of anything interesting by the time they had to come up with a fourth nickname...thus, the last John was nicknamed, "Toilet".
Poor kid.
Talk about John the Lesser.

...and the problem can be compounded by us taking on Saint names or naming our kids after Saints...it is my hope that we all become Saints

"* But you never know. I could snap some day; people do"

Hahahaha! Sr. Mary Martha, you did it again.

brilliant! my brother is Joe. not joeseph or joey, just plain ol joe, not to be confused with Big joe, who is my grandfather. we were calling him little joe, but he started to be offended once he hit puperty!

Well, I don't call my earthly brothers and sisters by their last names; why call the heavenly ones by theirs?
Although I keep trying to get my husband to let me name a couple of kids by saint's last names. My daughter is Emilia, after St. Jerome Emiliani, and I think Majella is a great girl's name.
Also, I'm trying to avoid the phenomenon of 25 Dominics and Teresa's in the Catholic school class

My late father and I have the same names except the Senior and Junior part. Our first names is/was Edwin. My father went by "Ed" and I go by "Eddie".
See? No problem.

I'm not a fan of using the same name as everyone else either. I don't have any children yet, but I do have a list of names that I keep revising - I used to really like Gianna, but I think I might have to cross it off the list - it's becoming so popular. Of course, by the time I actually have children maybe the fad will have died out!

I love you Sister Mary Martha. But I would love you more if you provided alcohol.Sorry to double comment. I'll be gone now.

duchess, it appears by your vulgar use of language that you don't need any more alcohol. Pray to St. Monica...or Matt Talbot.
http://www.etsy.com/view_item.php?listing_id=505131

My sister is Genna - a nickname for Genevieve, who is my mother's birthday saint.
A friend of mine named her daughter "Sienna", after St. Catherine.

Sorry for the vulgar language on your blog Sister. I have cut down my drinking too seriously.

But I do still yearn wistfully for a visit from the Nun apple-tini cart I conjured up in my head with pictures coming to town. ;)

I am several years late to this party, but am striving to catch up on the blog, so as not to earn the dreaded "Corner." Sister...I can agree wholeheartedly with this posting. In my small mid-western home town, we had a father and son who were both named "Richard."

The father was called "Big Dick."

No lie. I am sure the son needed therapy.