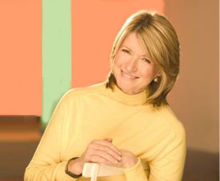 The other day I had occasion to mention Martha Stewart. A long time ago I saw an episode of her program where she was making quesidillas. She was in her fabulous kitchen where she has a special small refrigerator built into her kitchen 'island' that is just for keeping dough cold. Her actual refrigerator, like her linen closet, is the size of our entire kitchen. Don't get me started on that linen closet. If there is a housing shortage in your area it's because of the space Martha Stewart's linen closet takes up. Back to the quesidillas...she had a special pair of scissors, a pair of her old sewing pinking shears. She explained that they were no longer good for sewing any more and she had marked them with one of those embosser things where you can label everything you own and your dog Rollo, and she had put on those scissors "quesidillas".

I use a knife.

Still, after I got my hair to lie back down, I enjoyed her segment on ironing. She did it the way my mother used to, by spritzing each piece of the laundry and then rolling each piece up so it stayed damp, putting each piece in a laundry basket next to the ironing board ready to iron. I don't believe she turned on a soap opera. My mother did that. It brought back happy memories.

I have a love/hate relationship with Martha Stewart. Okay, I don't hate her. I don't think I hate anyone. If I do....straight to hell for me. But she does cause my teeth to clench.

The other person I have a love/teeth clenching relationship with is Stephen Hawkings, the brainiac physicist. You have to admire a person who has soldiered on the way he has, with all his horrible health problems and how hard it is for him to do anything at all, let alone what he has done. Not to mention how brilliant he is. Quite a package.

Then I heard he dumped his wife who stood by him all these years for his nurse. How did he even do that?

It's pretty depressing when even Stephen Hawkings trades his old wife in for the new model.

You might be surprised that I spend any time thinking about Stephen Hawkings at all, but I do. I do because once I heard him say that he believed in God because he thought he could prove God's existence mathmatically. At least I think that's what he said. Maybe I was dreaming.

But from the little I know about physics, that makes sense to me.

Calm down. I don't need anyone to prove God exists. If I did, why am I dressed like this? I mean, really. I could just be wearing comfortable mumus.

But that doesn't stop me from thinking how great it would be if someone did prove it for people who aren't dressed like this, so to speak. I would love it!

And I would hate it. Not for the reason you probably think...that God is all about faith.

I have more faith in Marth Stewart.
Posted by Sister Mary Martha at 10:07 AM

I love the fact that Martha Stewart has brought back the idea that handmade things are of value. However, she does this in the most consumerist way possible, which I have a difficult time reconciling.

I believe that excess murders the soul, and Martha Stewart is all about excess. Special shears just for quesadillas? A special refrigerator for DOUGH?

I read something written by a student at a Cordon Bleu culinary academy that said 90% of things people cook on a daily basis can be achieved with four good knives, four pans, and a few mixing bowls, cutting boards, and spoons. Notice no quesadilla shears were mentioned.

I watched a segment on ironing on Martha Stewart once. She had an expert (an expert on ironing?!) on, and when someone asked the expert, who was carefully ironing antique lace with lavendar scented water, "How can I minimize my ironing time?" the expert answered "Buy clothing that doesn't wrinkly, like flannel or sweat pant material".
Wow. I learned so much from that episode...(but not as much as the episode where she cooked a 3 course meal using 7 pans and then fed it too her dogs, because slaving away on dog food is apparently 'a good thing'.)
Oh, and having spent 4 years of marriage with my "kitchen" in a Rubbermaid tote, traveling the country like a gypsy, I agree with Katdee. You really only need 2 pans and a noodle pot with a lid. A big knife and a small knife, and at least one cup for each child. And a crockpot.

milehimama said:
...she cooked a 3 course meal using 7 pans and then fed it too her dogs, because slaving away on dog food is apparently 'a good thing'.

I know Martha Stewart is a a television host, and she has to find things to do that people may find interesting to watch but would never do in real life. But slaving over dog food (dogs don't care) while people are eating out of trash cans every day? I'd be afraid of being sent straight to Hell just for that.

It's not as if the dogs care either way, anyhow.

(raising hand)
Sister, didn't Aquinas prove the existence of God mathematically, or at least via a logical proof?
And being celibate, he didn't have a wife to dump.

St. Augustine didn't have a wife, but he did have a mistress and a child, who he loved dearly, but sort of dumped. I think he dealt with child support.

Anyhow, he didn't do it mathmatically, but he did have a logical proof.

I don't find it all that logical since you have to believe "A" to believe "B". A lot of people don't believe "A". So the whole thing goes down the drain.

OH, duh...I was thinkging about Augustine because I was writing about him today.

Aquinas, yes...he certainly never dumped anyone, unless you count the prostitute his family sent over to tempt him to not be a priest.

But I stand by my statements about the proofs no matter which saint that starts with "A" said them.

"So long as the universe had a beginning, we could suppose it had a creator. But if the universe is really completely self-contained, having no boundary or edge, it would have neither beginning nor end: it would simply be. What place, then, for a creator?"
-Stephen Hawking

I would suggest that Hawking's feelings on God fall somewhere between agnostism and deism, with a strong lean in the direction of deism. It should be noted however that Mr. Hawking's expertise in the field of theoretical physics does not make him an expert in all areas of study, such as philosophy and theology.

If you want to read the logical proof of god by Thomas Aquinas, it is available on the internet. I would say it is neither logical, nor proof however.
http://www.fordham.edu/halsall/source/aquinas3.html

Sister Mary Martha,
You are a delight! God bless you.
I thoroughly enjoyed reading your blog and was also tickled by your profile...your "interests" in particular, lol.

Did you know Hawking's voicemail box thang comes from Sunnyvale, California? That is like 5 minutes down the hwy from me.

Don't be too upset...there is more to this story then meets the eye, dear nun: ( http://tinyurl.com/zhfnm scroll down the page...thx -dutchie)

"While Gentry travelled and worked with the scientist, she witnessed bitter
clashes between the Hawkings.

"I can honestly say that Jane was often extremely unreasonable. She used to
shout at him and say really awful things," Gentry said. "She taunted him about
his physical disabilities and was sometimes extremely threatening. When a man
is sitting helpless in a wheelchair relying on life-support systems to keep him
alive, it is so easy to be cruel.

"Jane was guilty of this on more than one occasion. The first time I heard her
shout at him I was really shocked because in some ways he is so defenceless.

"It was clear there was no love left in their marriage, but still they stayed
together, even though she spent a lot of time with her boyfriend, Jonathan." "

Darn thing of it is, according to Wikipedia, the second wife's ex was the designer of the first model of Hawkings' voice box thingy.

It's practically a soap opera.

Sister Mary Fiacre and I both think you are a delight. I know this because...well, I just do. Thank you for making me laugh and showing others that although we Catholics take the faith seriously, taking ourselves seriously is a whole other matter altogether. God Bless you.

You could convert me if you got that apple-tini cart thang going on in San Jose, sister Nun.

Don't mind me. I am just burnt out from a hard day at the office and being a bitter old single spinster.

Pointing to my blog, hinting that I talk like Stephen Hawking... I don't know how to take it, honestly.