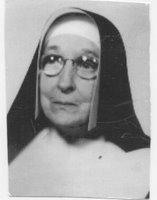 Today's opportunity to suffer came from the weather which felt as though the sun had parked in our parking space outside the convent. We have just the one parking space because we have just the one car, a 1996 Toyota with 125,00 someodd miles on it from driving around performing corporal works of mercy. I'm the only driver as Sister St. Aloysuis is too nervous to drive and Sister Mary Fiacre can't tell the difference between her Lazy Boy and the highway.

Our car is "Mary" blue and the combination of the intense heat and the sky blue of Mary put me in a mind to think about Our Lady of Fatima, where the sun itself, the fires of hell and Mary all converge.

For the uninitiated, Fatima, Portugal, is a place where the Virgin Mary appeared to three peasant children. Not all Mary sightings are approved by the Catholic Church. The grilled cheese sandwich, no. Mary on a tree somewhere, nice try, but that's called bark. Mary on a Chicago underpass, the image made out of smog and goo....what do you think?

Fatima is approved with a capital "A". Mary had lots to say to the three peasant children. She tends to have a recurring theme when she appears to anyone, which is basically, "Jesus is very mad at everyone. He's pretty much up in heaven saying to me (Mary) 'hold me back! hold me back!' The only thing standing between you and Jesus' wrath is me. So straighten up. Pray the rosary. A lot. Then maybe, maybe Jesus will calm down."

That's pretty much the message of Fatima. To drive home what the stakes really are involving Jesus' wrath, Our Blessed Lady took the three peasant children on a visit to hell. (See what made me think of this? Mary blue, intense heat?) Now maybe you'd think twice about taking a 9 year old, a seven year old and a six year old to a movie rated "R" for violent content, but Our Blessed Mother saw fit to show these 3 dim bulbs what they were in for in graphic detail.

In hell, some mystic saints have told us, our flesh is continually burned and ripped from our bodies. The fire burns inside and outside the body as though the veins were pumping fire. Plus, there is psychological torture because you know you are stuck there forever. And you blew it. You had a chance to just say the rosary every day and stop swearing all the time and go to Mass on Sunday and quit thinking about S-E-X every second, but no. You skipped along drinking lattes and reading the paper on Sunday morning and screaming heaven knows what at the guy who cut you off. You lost your Rosary right after you got it for your First Communion in the second grade and you think sex is FUN. So there you are burning and tortured forever.

Mary didn't even have to pay for a ticket for the show for Lucia, Jacinta and little.....Pedro...or whatever his name was. She also informed Jacinta and little.....Juan..or whatever....that they weren't long for this world so they didn't have time to mess around getting their affairs in order. You can see that Mary was very kind to those two, giving them that heads up and all.

On her last visit Mary proved she really was appearing, even though no one but the peasant stock children could see her, by letting the sun drop from the sky, dance all around, yo-yo up and down and return to it's place. Better than a Spielberg movie. That sun dropping thing, that will get your attention.

We could use a dose of Mary's tough love today. But she doesn't like to repeat herself.

If you have any questions about Fatima or other Mary appearances feel free to ask!
Posted by Sister Mary Martha at 9:14 PM