What's the Deal with Mary? 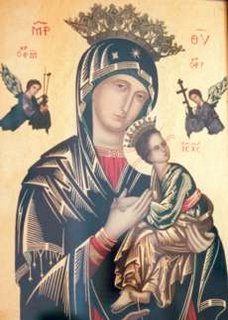 This morning I heard Sister Mary Fiacre mumbling. She's not a complainer, I don't think. If she is, we can't understand much of what she's saying anyway. I leaned in to see if she was making a request or some sort of comment, hard to do either if you don't know what' s going on around you. She doesn't.

I caught a word or two...and realized she was saying the prayer to Our Lady of Perpetual Help. Good choice! And how remarkable that her devotion to Our Lady is so ingrained as to be able to mumble out this prayer in her decrepit condition! If I wasn't so old myself I would have to say, "Way to go, Fiacre!"

In my life and travels I have encountered many many people, mostly 'separated brethren' (we used to call them the 'lesser faiths', but we don't want to go all  'Mel Gibson' on anyone), who simple do not understand the Catholic devotion to Our Blessed Mother.

What's the deal with Mary?

So let's take a trip down Mary Lane and figure this thing out, dispel some myths and set the record straight.

Let's begin with the most common misunderstanding in the world of Marian devotion (as the devotees like to call it....picking up the jargon already!):

CATHOLICS DO NOT PRAY TO MARY! Get that through your thick head!

We don't pray to saints, either. (Mary, by the way is a saint). We pray for their intercession. Calm down. It's just a fancy way of saying that we are asking them to pray for us. In our little shop, we have patron saints for every occasion. On the front of the medal is a picture of the saint and on the back, three simple words, "Pray for us."

So you have no problem, unless you are an atheist or a fairy wiccen, asking people to pray for you. You do it all the time, especially when you need something or you get scared, poor things. "Dad's having an operation!" "Little Bobby might be a junkie!" "If I don't pass this test I'll have to work at Wal-Mart!" "Pray for me!"

Asking Mary to pray for us is one hundred per cent no different than that.

So unless you plan to never ask anyone to pray for you ever again, you better shut up about Mary. I'll be asking you to pray for me and Mary to pray for me. I need all the help I can get.

And here's a little bonus: who do you think has Jesus' ear? Who has more pull? Me? or His mom!

Remember this story? Jesus and His mom are at a wedding and the hosts run out of wine. You remember this one! Jesus has actually not 'outed' Himself as the Messiah, has not performed a miracle or said peep about what His plans for the future outside the carpentery shop might be. Mary calls Him over and simple says, "They're out of wine.........dear." And He actually whines around about how He's not going to blow his cover just yet, blah, blah, blah.

Apparently, she shoots Him a look, because the next thing you know, not only is there wine, there is the best wine ever.

What do we learn from this? Jesus listens to His Mother!

And on top of all of that she's sssoooooo nice.......except to the children of Fatima, but that was for their own good.

She took them, under age 9 all three of them, on a trip to hell and told two of them they wouldn't live long and they better get their ducks in a row. A kindness to the little sinners, really. Then she knocked the sun out of the sky and made it spin around to prove she meant business. Left a letter that made the Pope cry....tough love.

For the rest of us, who don't get the priveledge of a private audience, she is that beautiful lady in blue, the mother of all mothers, to whom even Sister Mary Fiacre still speaks. Wish she's speak to me. We have to take a guess on a daily basis what she'll eat when you put it in front of her and what she'll flip onto the floor. The old dear.
Posted by Sister Mary Martha at 11:17 AM

I came here from the comment you left on my blog (ourladysblog.wordpress.com). For some reason, your comment was marked as spam.

Whether or not we say "pray to Mary" or "pray for her intercession," the main point is that we are addressing her asking her to pray for us, which is something short of adoration. If "to pray to" is synonymous with adoration, then no, we don't pray to Mary. If it means more "to talk to" or "to request from" then yes, we do pray to Mary. Since the history of the word "pray" means the latter, I prefer to say that we do in fact pray to Mary. This gives us problems when speaking with Protestants, I know, but it might be just as hard to convince them that we don't pray to Mary when Catholic bookstores are full of books with that say "prayers to Mary." Ultimately, it's a squabble over semantics (which, admittedly, is difficult for some people to wrap their mind around). The main point to get across is that we don't worship Mary, and that we are asking her to pray for us to God, however we phrase what we actually do.