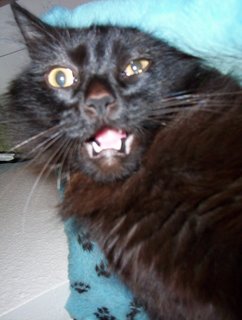 There was funny smell in the convent last evening. We are not strangers to odd and sometimes unpleaseant odors eminating from Sister Mary Ficare, poor dear, but after careful inspection we discovered that she was 'clean', as they say on police programs.

Sister St. Aloysius and I had to spend more than an hour like two blood hounds on the trail of an escapee from the chain gang to trace the stench to the bedroom and at long last behind and under the night table. A dead mouse. Not even our glow-in-the-dark statue of Our Lady of Fatima had helped him.

Feeling no need to give the mouse a proper burial we flipped his carcass over the convent wall into the alley. Sister St. Aloysius, with her weak constitution and ES Syndrome* had to lie down. With SisterMary Fiacre already deemed immaculate, I had time to reflect.

We never have to worry about vermin at the convent. Health care costs, gas, food, the state of our immortal souls, yes. But we have a cat who takes care of one of our needs and sometimes leaves the evidence of his hard work as a gift.

Not the kind of gift anyone wants, but certainly something the cat was proud to give.

And isn't that the way God works? Not giving us something we would necessarily want, but letting us know that He is around, thinking of us.

Think of that the next time you bemoan the size of your nose, or any other things God gave you that you don't like, remember that, like our cat, His way is not our way.