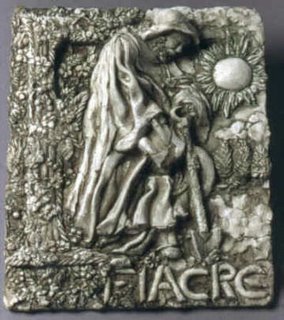 Sister Mary Fiacre has been going to bed ever earlier, it seems. We think one of these days she'll just...well, you know. When I say 'going to bed', I don't mean to imply that she yawns and stretches and says, "oh my, I think I'll turn in." What actually happens is that she starts to nod off, then slowly falls forward. We put her to bed so she doesn't hit the floor. Then she's good to go until around 7 am. Which is perfect because it means I've had coffee before I have to wrestle her back up again.

Now that's she's safely ensconced for the day, I will confess I feel terrible. Tomorrow is her feast day! She comes from the very old Catholic tradition that your feast day is a bigger deal than your birthday. She won't know one way of the other what tomorrow is. I could tell her it's Christmas and sit her out in the hot sun with a parasol and dance the hula around her. Wouldn't matter one way or the other to her. Although the hula would make her smile. Anything with lots of movement makes her smile. We should take her to a Nascar race.

Let me tell you the little bit I know about Sister Mary Fiacre. She was still somewhat lucid six years ago when I first met her, but she was already just about to say goodbye to walking forever. Her legs seem very sturdy. In fact, she's very, well..... bottom heavy. Her thighs are especially large, but from the waist up she's a more normal size.

Why? Because the young woman who eventually became this old bird in the wheelchair was once a circus performer! Back when the circus was actually an exciting form of entertainment and not the creepy animal rights activist magnet it has become nowdays. She was an aerialist! She was the catcher! She entered the Big Top on an elephant!

I have always noticed that circus women have big thighs.

Anyway, all that hanging upside down by her knees and ankles have ruined her joints in her old age. It's that simple. She didn't have a dramatic fall while swinging by her teeth from a noose. Although, come to think of it, she is a little low on teeth.

So how did she go from the scantily clad swinger to grade school nun?

Her joints were already ailing her in her early twenties and one of the other performers suggested that she give up the trapeze and join his act and allow him to shoot her out of a cannon. She decided right then and there there had to be more to life than that.

She didn't go directly from potential human cannon ball to second grade nun and she hasn't fully elaborated on the journey. She has, however, waxed poetic about how fulfilling her life was teaching the second graders and preparing them for First Holy Communion.

I did have the opportunity to ask her how she came to choose St. Fiacre. It was simply that she saw her students are her own little garden.

Here's the story of St. Fiacre. He was really learned but wanted the solitude of being a monk. To escape his fans, he moved from Ireland to France. There he was given by the local bishop a tract of land. The bishop told him he could have as much land as he could turn over in one day. Fiacre walked around a huge area with his staff and whatever he pointed to turned over. Trees were uprooted even.

There he had the most fantastic vegetable garden. He grew healing herbs. His big fat miracle with the land drew hundreds of people to the monastery he built. He was a very famous healer. He healed everyone who came, but women were not allowed inside the monastery (normal practise of the time, not Fiacre being a pain).

Suddenly the story of St. Fiacre and Sister Mary Fiacre intersect. A woman who ignored the rule and entered the monastery became disoriented and lost her marbles. Her marbles were never returned to her.

St. Fiacre is also the patron saint of cab drivers (and...what you use Preparation H for. There really IS a patron saint for everything!) because in France cabs are called fiacres, not after the saint, but after the hotel that bears his name. The St. Fiacre Hotel was the first to have rented carriages.

Oh well. We still have that day old cake from yesterday. And the milar balloon with Winnie the Pooh. We can tell her it's St. Fiacre. Would that be a sin?
Posted by Sister Mary Martha at 9:43 PM

Always a delightful break to stop by your convent in the midst of my travels through the various web pages and blogs that are on my itinerary each day.

And I always learn something important.

One just nevers know when someone might ask one about where did they get the idea for taxis? I wonder if they had foreign fiacr-istas in those days who couldn't speak French?

No doubt. St. Fiacre himself was a foreigner.