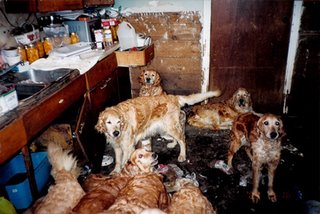 Things can always be worse.


We all have our jobs to do. Sister St. Aloysius and I split Sister Mary Fiacre duty, which is a vast array of mop ups, wipe downs and near misses, sprinkled with searches and chase scenes.

After that, we have our chores here at the convent that we split between the two of us. Yesterday I noticed the stove top, which is Sister St. Aloysius' assignment and always has been. (I clean out of the refrigerator and defrost. Yes, I said defrost, it's that old.) The stove top is absolutely filthy. Filthy! Since Sister St. Aloysius also does the cooking (I do the bathroom, an even trade, I think, for tedious chores), I haven't really looked at the stove top in I don't know when. Maybe last Thanksgiving when she asked me to stir something, at which point, who could even see the top of the stove with all the pots and pans and drippings and basters?

When I brought the amazing stove top to her attention she calmly explained that yes, indeed, it has not been cleaned. At all. Since she's been here. Four years.

After I squelched the urge to throw up, I asked her why that would be the case, four years of not touching the stove top. This is her explanation:

"Well, you know, before I entered the convent I had a brain tumor."

(Can I just stop here and remark....this explains SOOOO much.)

I had to go sit down.


I prayed for the intercession of St. Therese, the patron saint of people who have to deal with the annoying habits of others, especially in places where you can't escape the person and their annoying habits.

I decided to clean the stove myself. Sister St. Aloysuis has agreed to actually clean the refrigerator as the situation with bacteria might kill Sister Mary Fiacre and myself if it goes unchecked. Somehow this logic does not apply to the stove top. I can't argue with it because it has, in fact, been four years and all three of us still live.

But I'll tell you what, it really made me rethink this idea that you should actually live each day as though it were your last. It seems like a really great concept. Sorting out the important from the unimportant, the monumental from the petty.

But in the real world, nothing would get done. I can't imagine what the bathrooms of the world would look like. ugh.
Posted by Sister Mary Martha at 2:57 PM

Sister, I registered at this site just so I could respond to this blog...err...online essay.

I love your sense of humor so much!

I laughed so hard about the stinkin' stove. I am reminded of certain of my college roomates! And loved the chocolate blog - where you thought (and I wholeheartedly agree) that the chocolate was an owl and not so much Mary.

Keep up the fabulous writing! I just know you're saving souls left and right with your rapier wit and no BS (a thousand pardons) point of view.

I love the Emergency Pass to Heaven necklace you sent me, by the way.

Humor? I'd say I smell sin, but I can only smell Easy-Off right now.

I'm glad you're enjoying your necklace! We aim to please.
Sister Mary Martha

Dear Sister,
Thanks for bringing back a happy memory of a "Grass Roots" song that I used to like -- a song that few people know today: "Let's Live For Today." Here's the refrain: