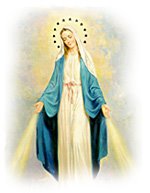 I only met Sister Mary Fiacre about five years ago. She still spoke a lot back then and some of what she said actually made sense. She told me back then why she chose St. Fiacre as her namesake. Her beloved grandfather was a cab driver and St. Fiacre is the patron saint of cabdrivers. (It's even the French nickname for cabs. Ironically, he is also the patron saint of the problem people get when they sit on cold cement all day which I am loathe to mention but which has in common a common root found in the word "asteroid." Sister Mary Fiacre sits all day. Perhaps her choice of patron was visionary.)

I mention this because I feel like I know Sister Mary Fiacre quite well, even though I don't know the hard cold facts of her life.

We don't meet the Blessed Mother all that much in the New Testament. She is mentioned a handful of times: A story or three about Jesus as a child, the wedding at Canaan, at the foot of the cross...there are a few more, not much.

How did we get so wild about Mary? We do love her especially. What's not to love?

Ever notice that she's always in blue? And she always wears that big drapey outfit? That's no accident. She could have appeared to Bernadette in a smart Chanel suit. She didn't.

Way back when the official way to adopt a child, right in the court room, was to drape your cloak around the child. That was the sign to everyone that the child was now yours.

Blue is the color of the sky which is over all of us.

Mary's blue cloak is a sign that she adopts us all. Even the separated brethren and Paris Hilton.

In 1830 Mary appeared to a little nun named Catherine Labourre and showed Catherine a vision of a medal Mary wanted Catherine to make. Catherine got that done and so many miracles happened to people wearing the medal it became known as the "Miraculous Medal."

But think this over! Mary showed Catherine the medal...which means....the medal is a self portrait of Mary! There she is in her big blue robe adopting away. AND... bonus!...light is pouring out of her hands. That's grace flowing out of her to us.

Even the separated brethren and Paris Hilton have to love that! Mary appeared to Catherine in Paris, by the way.

We'll have to talk more about Mary's visit to Catherine in Paris, because like virtually all of Mary's appearances, she involves herself in world politics when she arrives. When she gave Catherine the medal, she had a larger agenda. But we'll talk about that later.

We didn't know a lot about Mary, but we have come to know her over all these years, even her political leanings. Tomorrow we'll take a look at Mary's life. But for today wrap yourself in the big blue robe and if it's still really hot where you live, offer it up.
Posted by Sister Mary Martha at 1:36 PM