So Sorry for Fidel 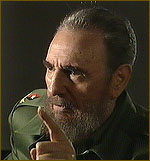 I remember when the feds broke into that house in Little Havana and dragged little Elian Gonzales away from his new life in Disneyland. I was completely distracted from the human tragedy ( for which much penance was in order) byinterior of the house where little Elian was holed up. Like a religious version of Marth Stewart, I may have been the only person to notice that there were Mary statues sticking out of everything. They were under the bed, on the shelves, poking out of the toy box, all over the walls.

I thought of it today as again I was distracted as I watched the people in Little Havana. They were cheering, to put it mildly, the illness and possibility of death of Fidel Castro.

Let me say, that even though Mr. Castro is a monster who may roast in hell forever*, we don't get to cheer about it.

But what distracted me this time is his illness: Divericulitis. Or diverticulosis. One or the other, one's acute, the other is chronic. His must have been acute, hence the surgery.

It appears, like many people who were tortured to death, Castro had a hunk of his intestine removed. If he's lucky, they've reattached his intestines back together where the hunk was removed, remaking it into a continuous tube. If he's unlucky, that won't work and so his intestines won't work either and he'll have to wear a bag forever. You won't want your nose anywhere near what happens when that bag is emptied.

My ears perked when I heard of his diagnosis because I can't tell you how many people I know with this intestinal problem. If digestive disorders were a fashion, diverticulitis would be on "Project Runway."

Once in a while she has to be hospitalized and pumped full of antibiotics, but it's not from anything she ate. It's because what she ate got stuck in her intestines and got infected. No one in Little Havana cheers .

I realize that it is as difficult to pray for a man like Fidel Castro as it is to change someone's colostomy bag, but we must hold our noses and do just that. Not for his swift recovery and freedom from pain...he can just offer that up. We must pray for his immortal soul. If he says he's sorry before he dies, he might stay out of hell. Keeping people out of hell is our whole job here at the convent.

Communism has been mostly irradicated in the world. It's been stuck in Cuba for two generations like an errant strawberry seed in Sister Mary Fiacre's intestine.

Maybe that hunk of communism is about to finally be removed. If only the hospital were full of Mary statues.

*The Catholic church never ever says one is in hell. The worst monster may have had an epiphany at the moment of their death and thought, "What was I thinking?!!" It doesn't look good for Fidel Castro, however, as he attended Jesuit school as a boy and knows better.
Posted by Sister Mary Martha at 9:56 PM

See what I mean? It's going to become the "in" thing.